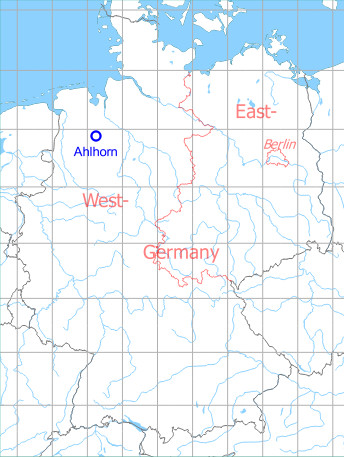 In World War I, Ahlhorn was an airship port and in World War II a Luftwaffe airfield. In the 1950s the field was expanded and used by the Royal Air Force. In the late 1950s, Ahlhorn was handed over to the German Luftwaffe, which based here combat, transport and helicopter units through the years. At the end of the 1970er years Ahlhorn became additionally a forward operating location for aircraft A-10 Thunderbolt of the US Air Force. The aviation use ended in the early 1990s. At the end of 2005, the facility was abandoned by the Bundeswehr. 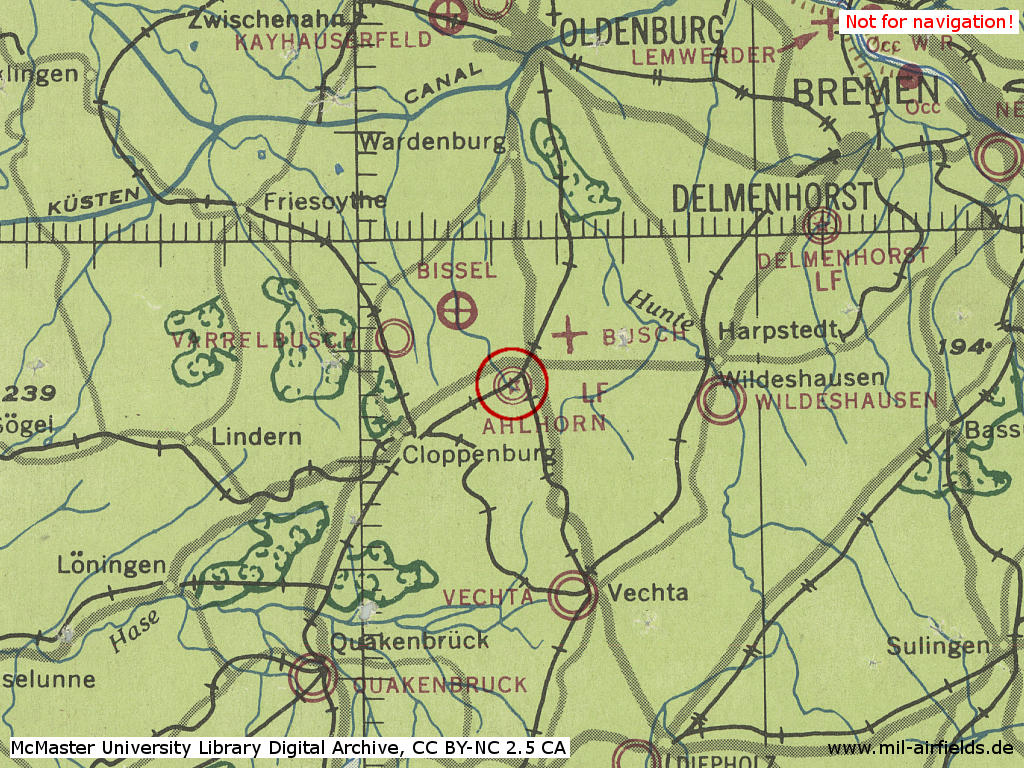 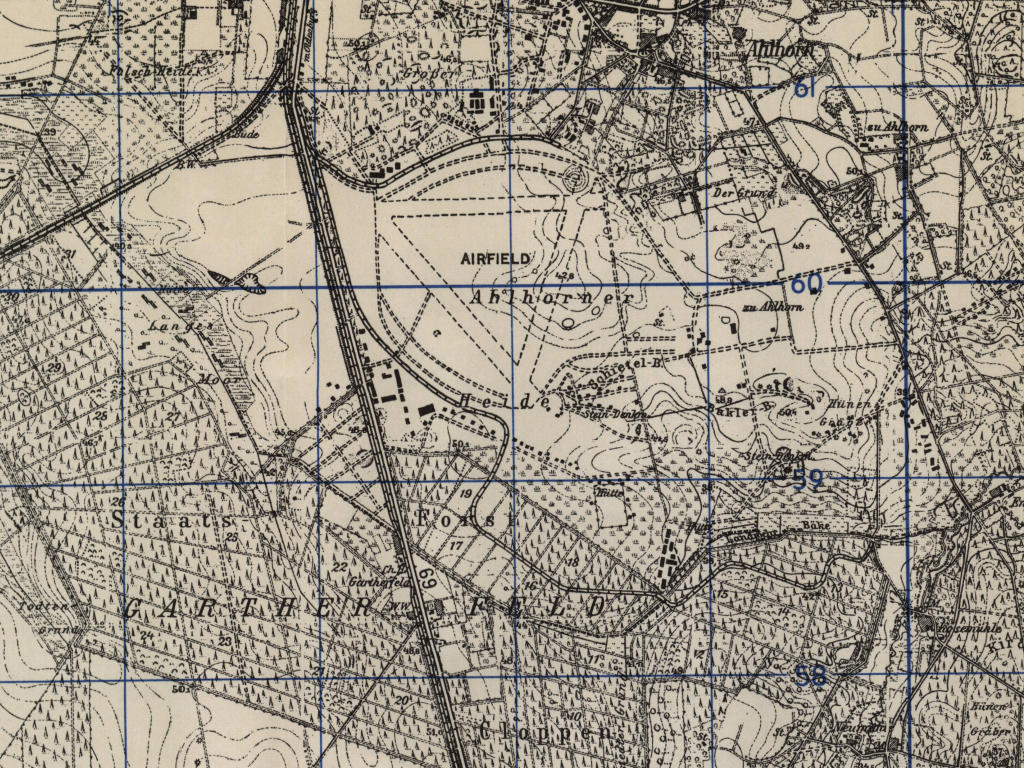 Ahlhorn Air Base on a US map from 1951 - The map should represent the expansion of the 1940s with three runways. Noticable is the curved course of the railway siding in the south.
Source: AMS M841 GSGS 4414, Courtesy Harold B. Lee Library, Brigham Young University 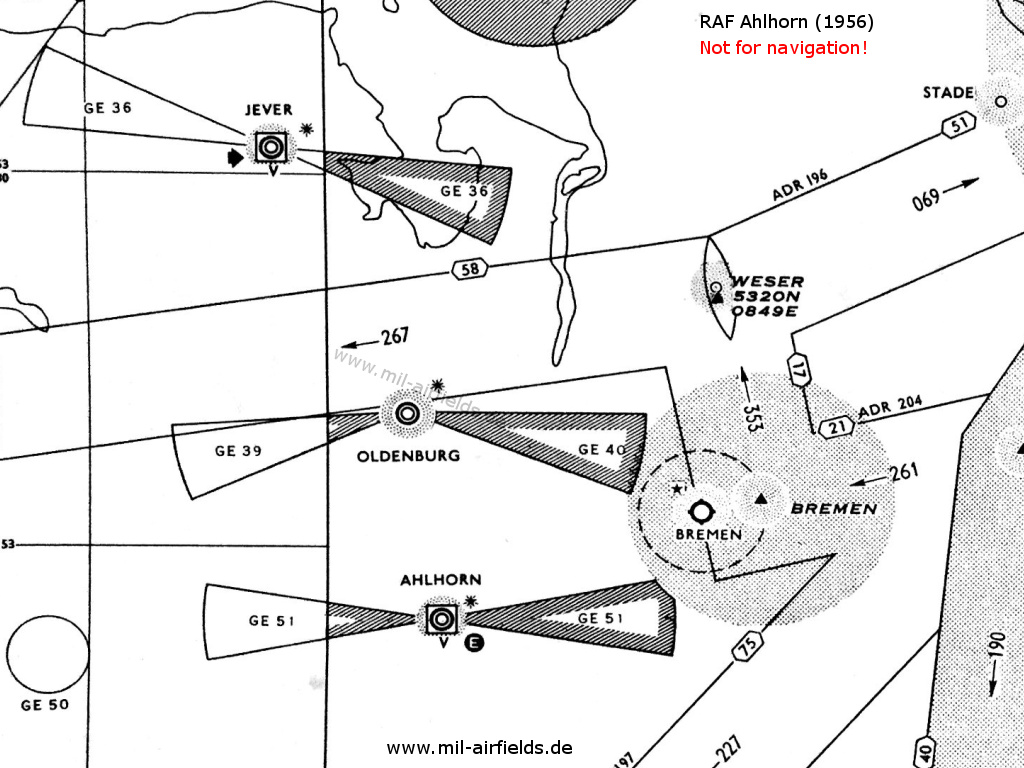 RAF Ahlhorn on a map from 1956 - The approach areas of the three British airfields Ahlhorn, Oldenburg and Jever are protected by restricted areas. The white "E" in the circle symbolizes the Eureka radio beacon, used by the British at this time. The square around the airport symbol with the "V" underneath shows an VHF direction finder. The black star stands for the coded beacons which is characteristical for British airfields 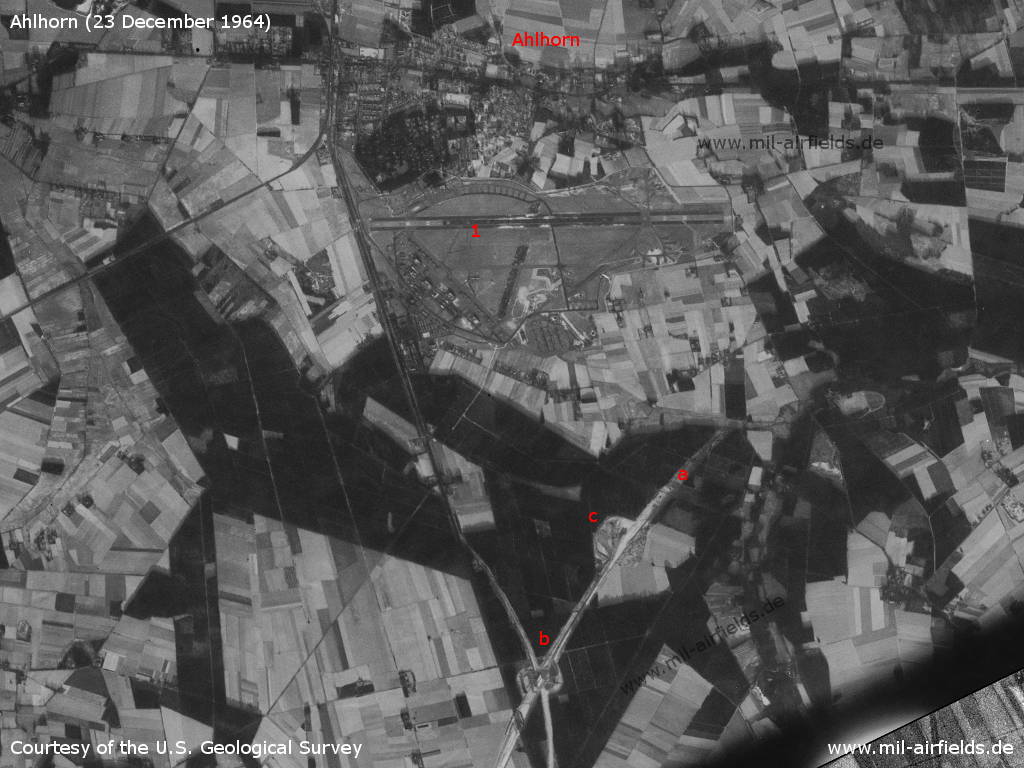 Ahlhorn Air Base on a US satellite image from Wednesday 23 December 1964 - 1: airfield. a: Autobahn A1 under construction, b: junction Ahlhorner Heide, c: clear area - was a parking lot planned here?
Source: U.S. Geological Survey 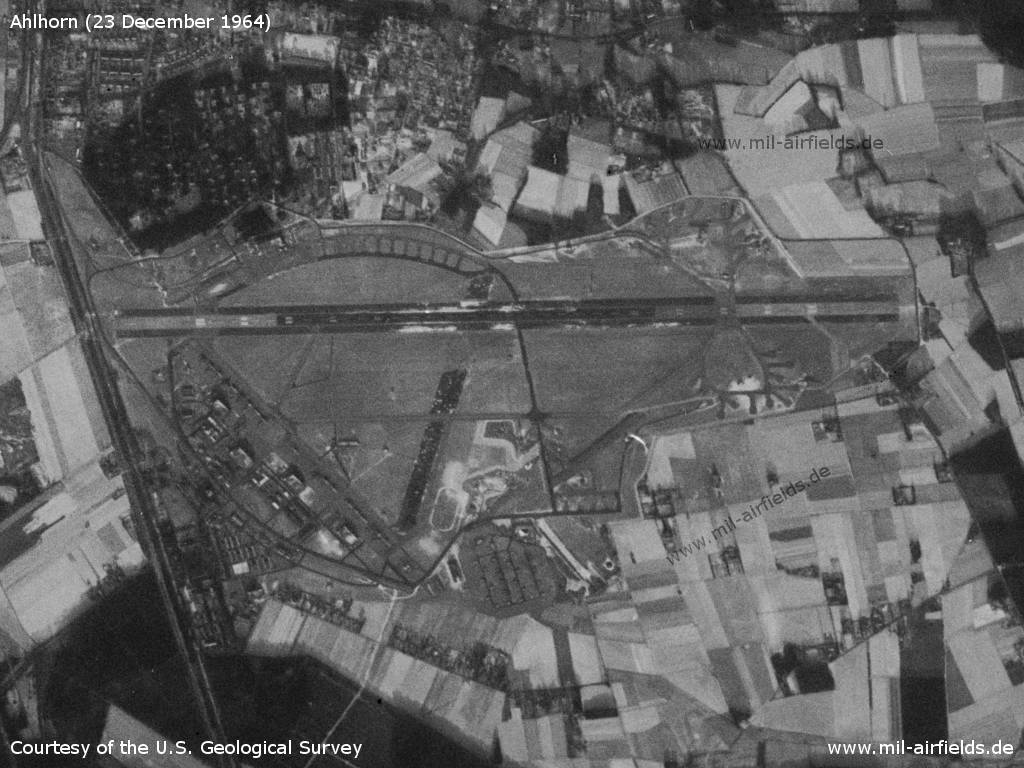 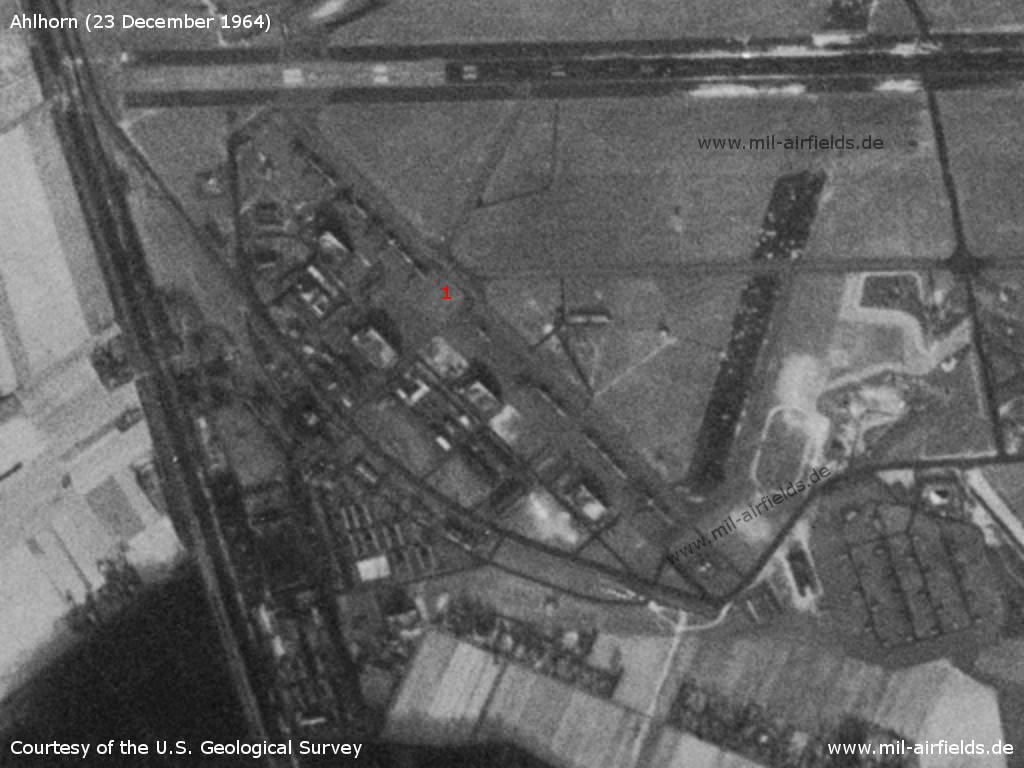 Enlargement - 1: There are 10 to 15 aircraft on the southwest apron. These could be Noratlas transport aircraft of the Air Transport Wing 62 of the German Air Force (LTG 62), which was stationed in Ahlhorn at that time.
Source: U.S. Geological Survey 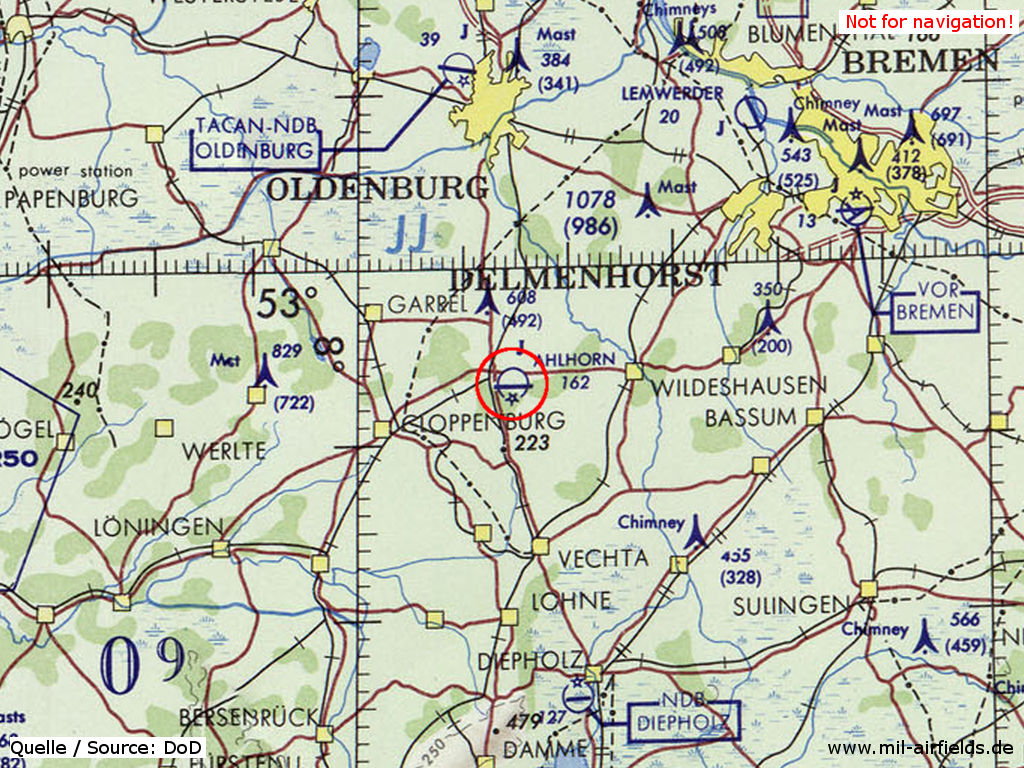 Ahlhorn Air Base on a map of the US Department of Defense from 1972 - Not shown here are the later built Autobahn A 1 and A 29, which lead past the field in the south and in the west. Thus the Ahlhorn Highway Strip is also missing, which is situated a little further to the north on the A 29.
Source: ONC E-2 (1972), Perry-Castañeda Library Map Collection, University of Texas at Austin 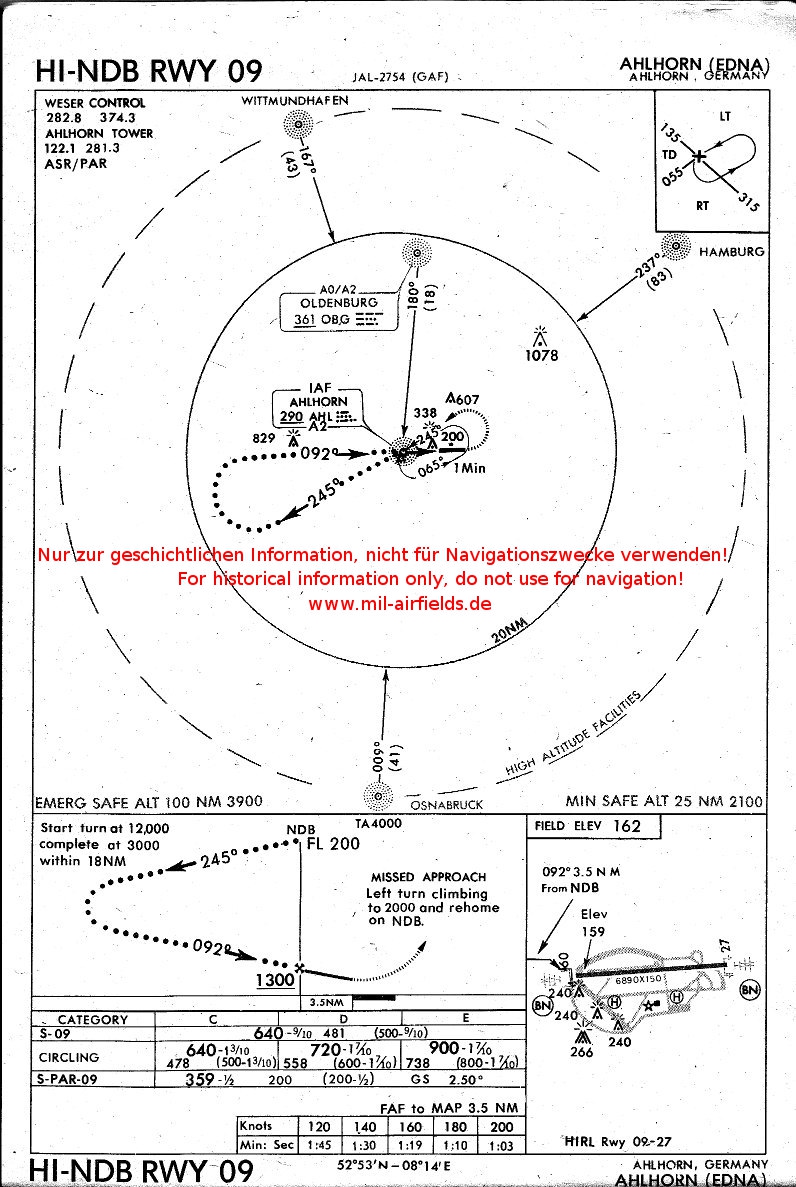 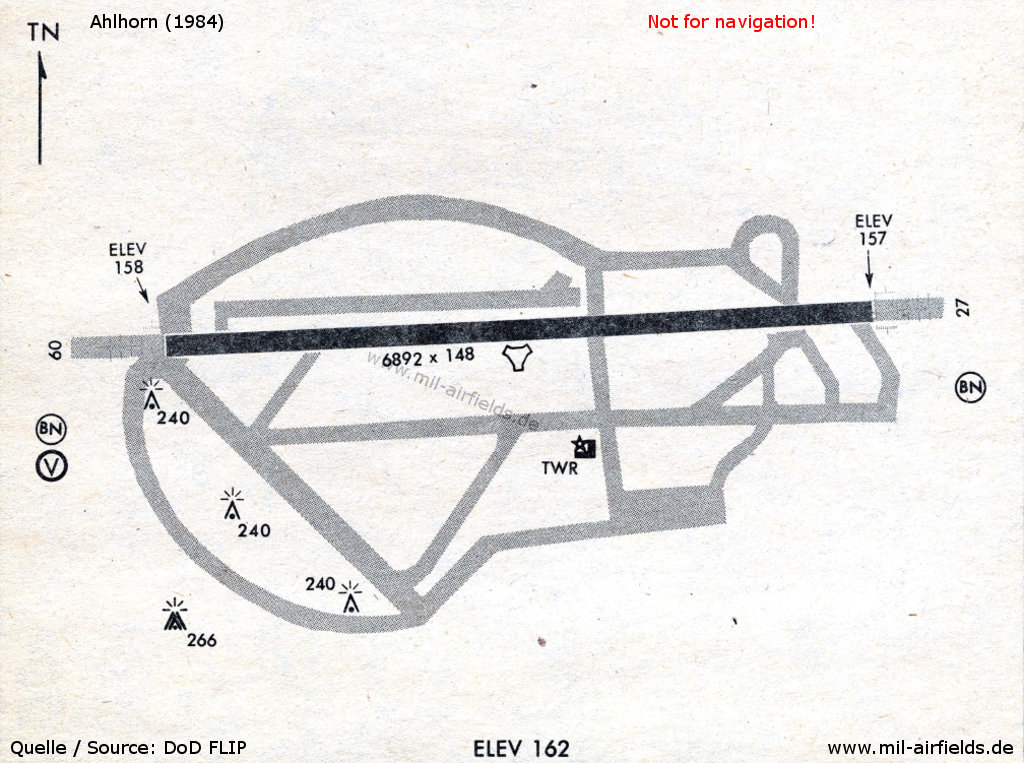 Map from 1984 - In the west the triangular layout is still visible.
Source: US DoD

The following pictures were taken in May 1983, during the exercise CHECKERED FLAG '83. Source: Department of Defense, Scene Camera Operator: TSGT G. Dennis Plummer 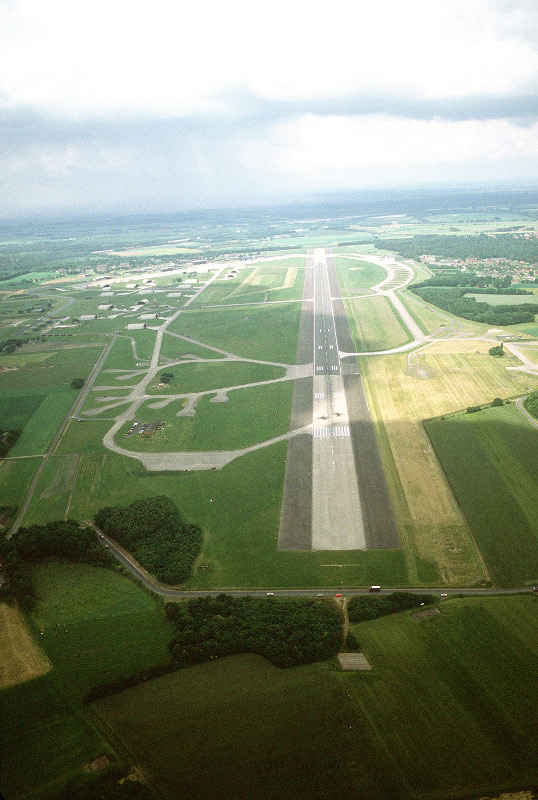 Look across the field from east to west
Source: US DoD 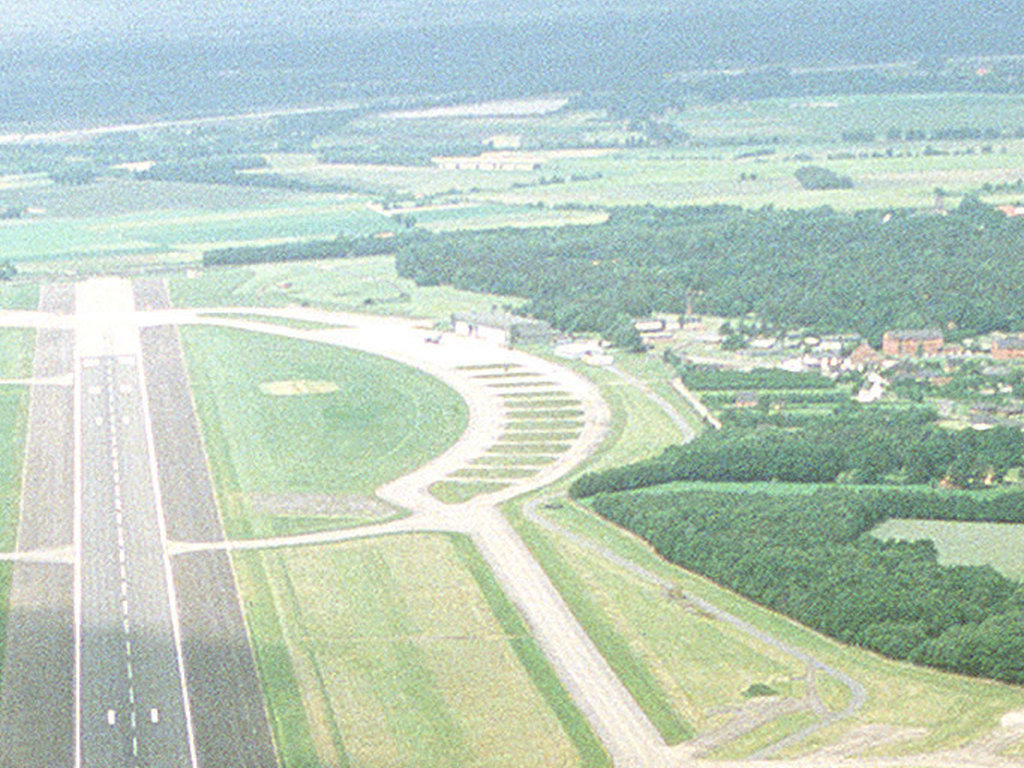 Enlargement: Ladder-shaped parking area in the north
Source: US DoD 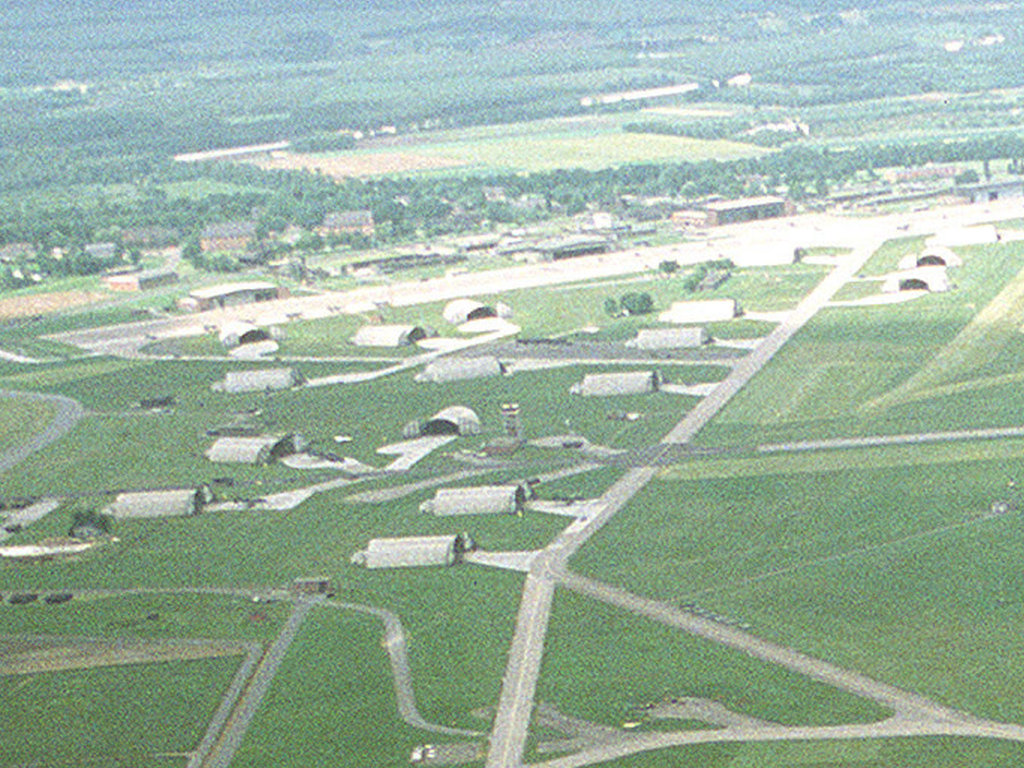 Enlargement: Shelter area in the south
Source: US DoD 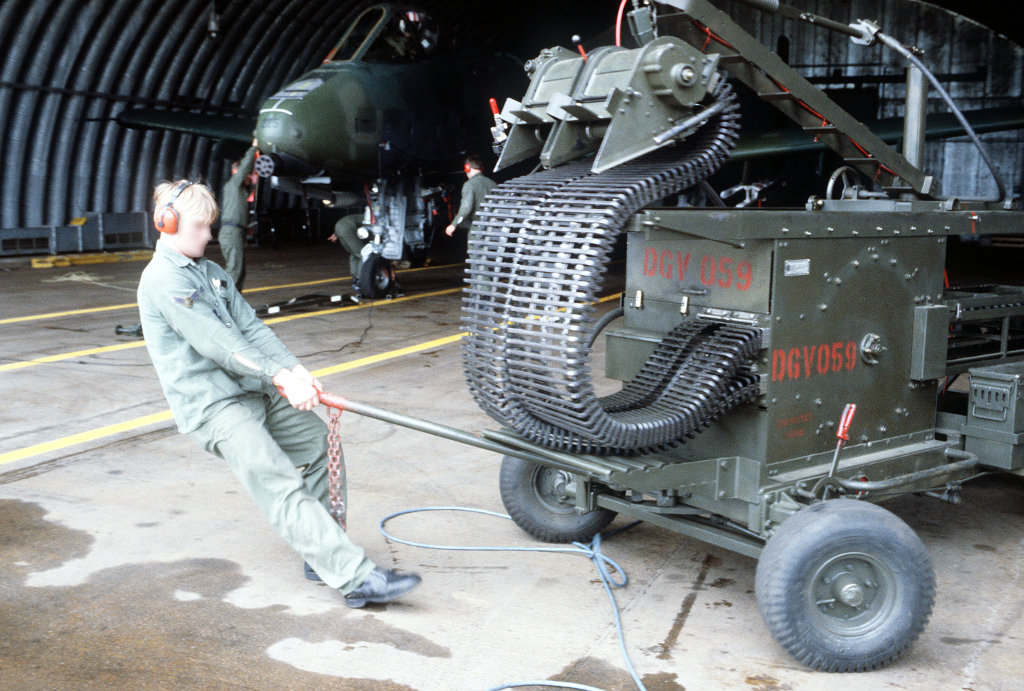 A munitions maintenance specialist pulls an ammunition loader into position for loading the GAU-8/A 30 mm gun of an A-10 Thunderbolt II aircraft
Source: US DoD 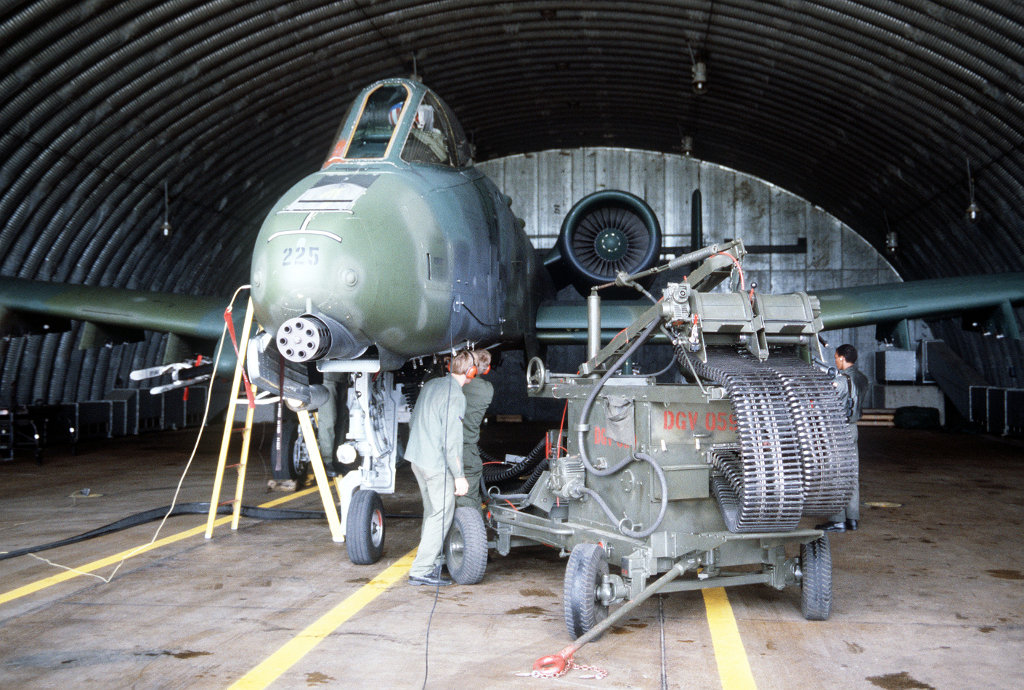 Munitions maintenance personnel use an ammunition loader to load the GAU-8/A 30mm gun of an A-10 Thunderbolt II aircraft
Source: US DoD 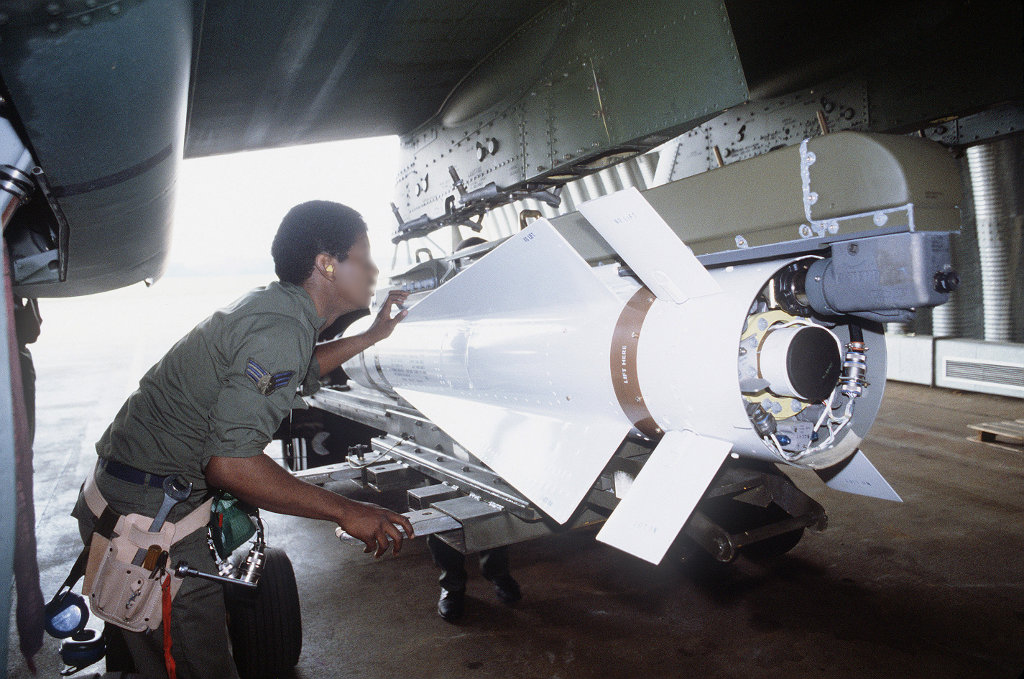 A member of a munitions maintenance crew loads an AGM-5 Maverick missile onto the wing pylon of an A-10 Thunderbolt II aircraft
Source: US DoD 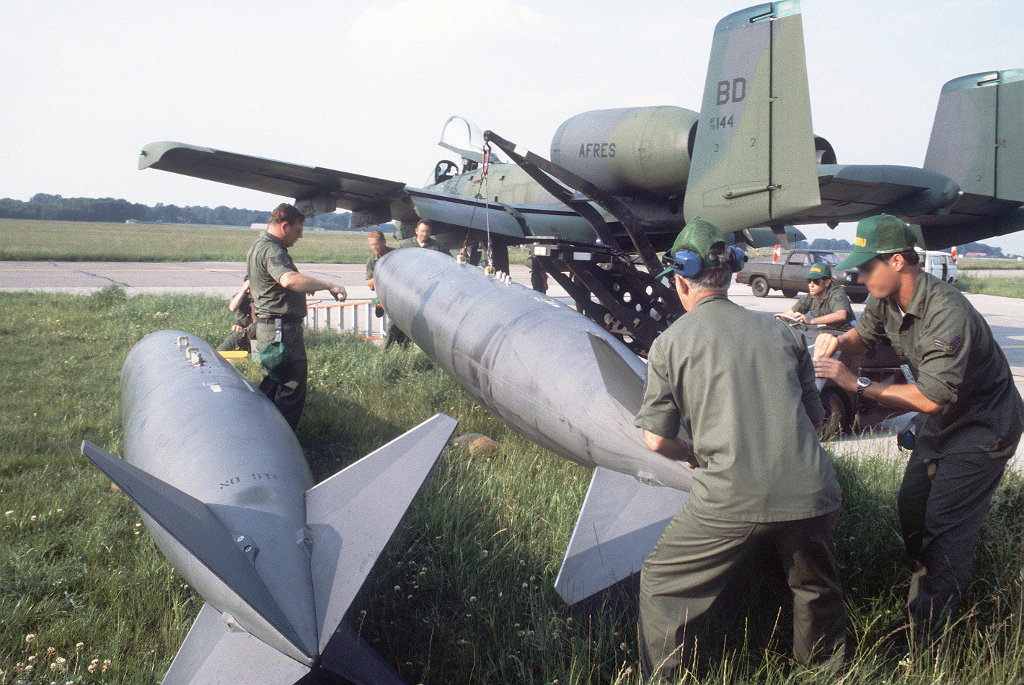 Maintenance personnel remove the wing tanks from an Air Force Reserve A-10 Thunderbolt II aircraft from Barksdale after its arrival
Source: US DoD 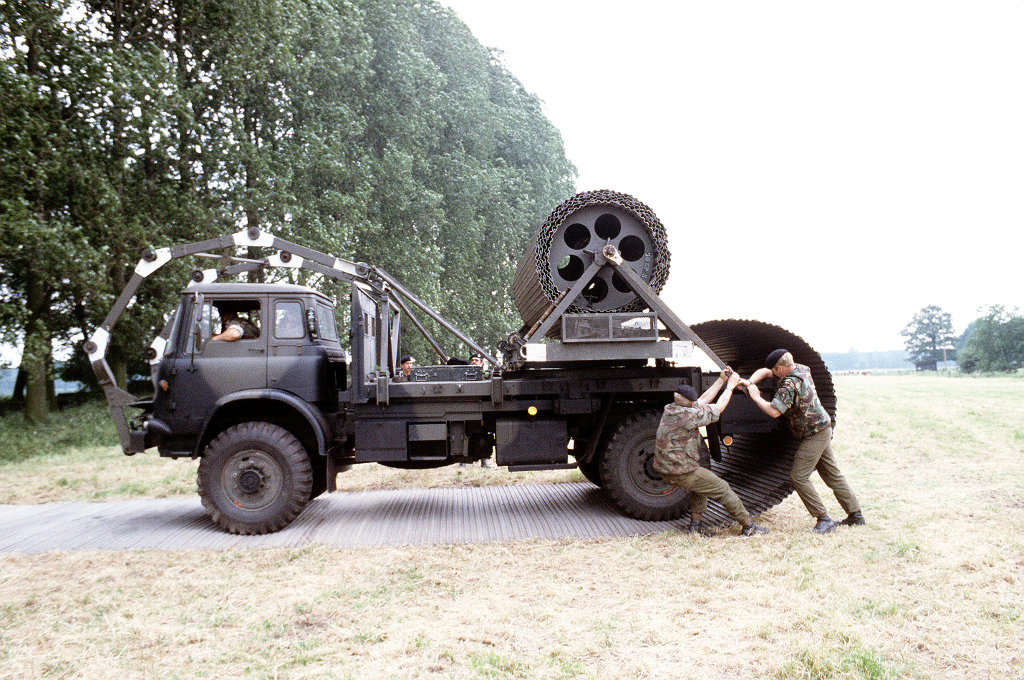 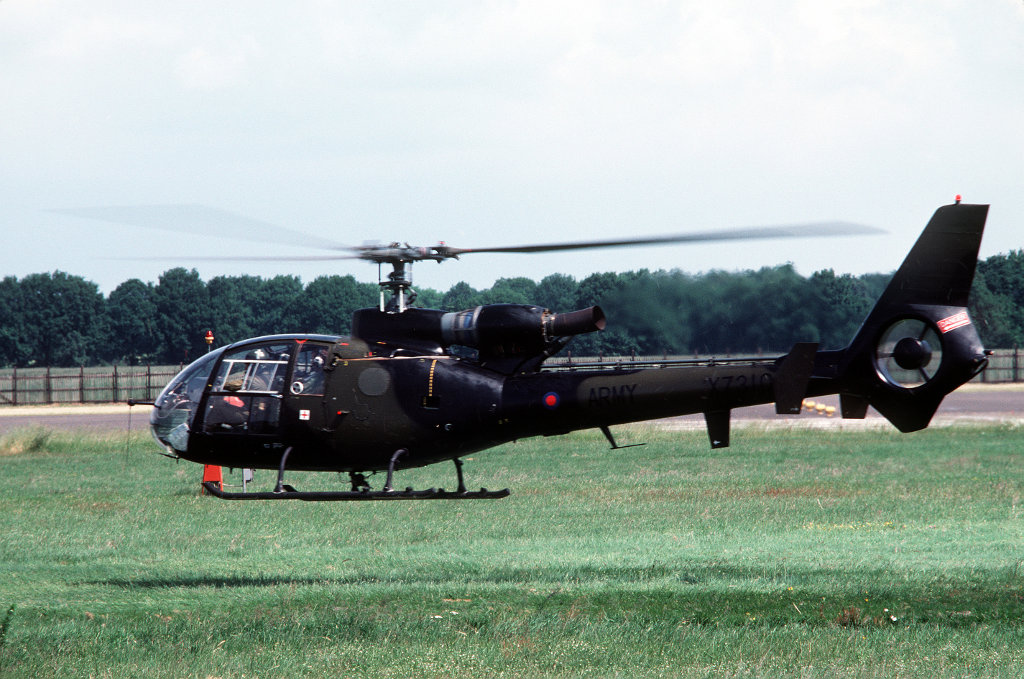 A left side view of a British Army AH. Mark 1 Gazelle helicopter hovering a few feet off the ground
Source: US DoD 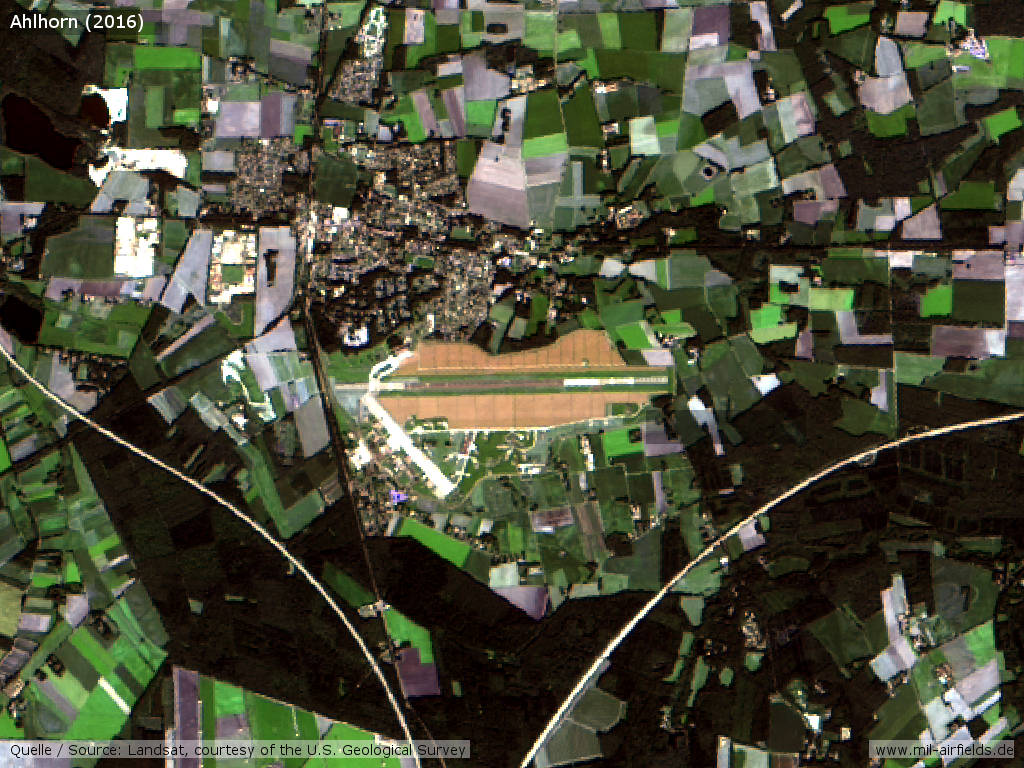 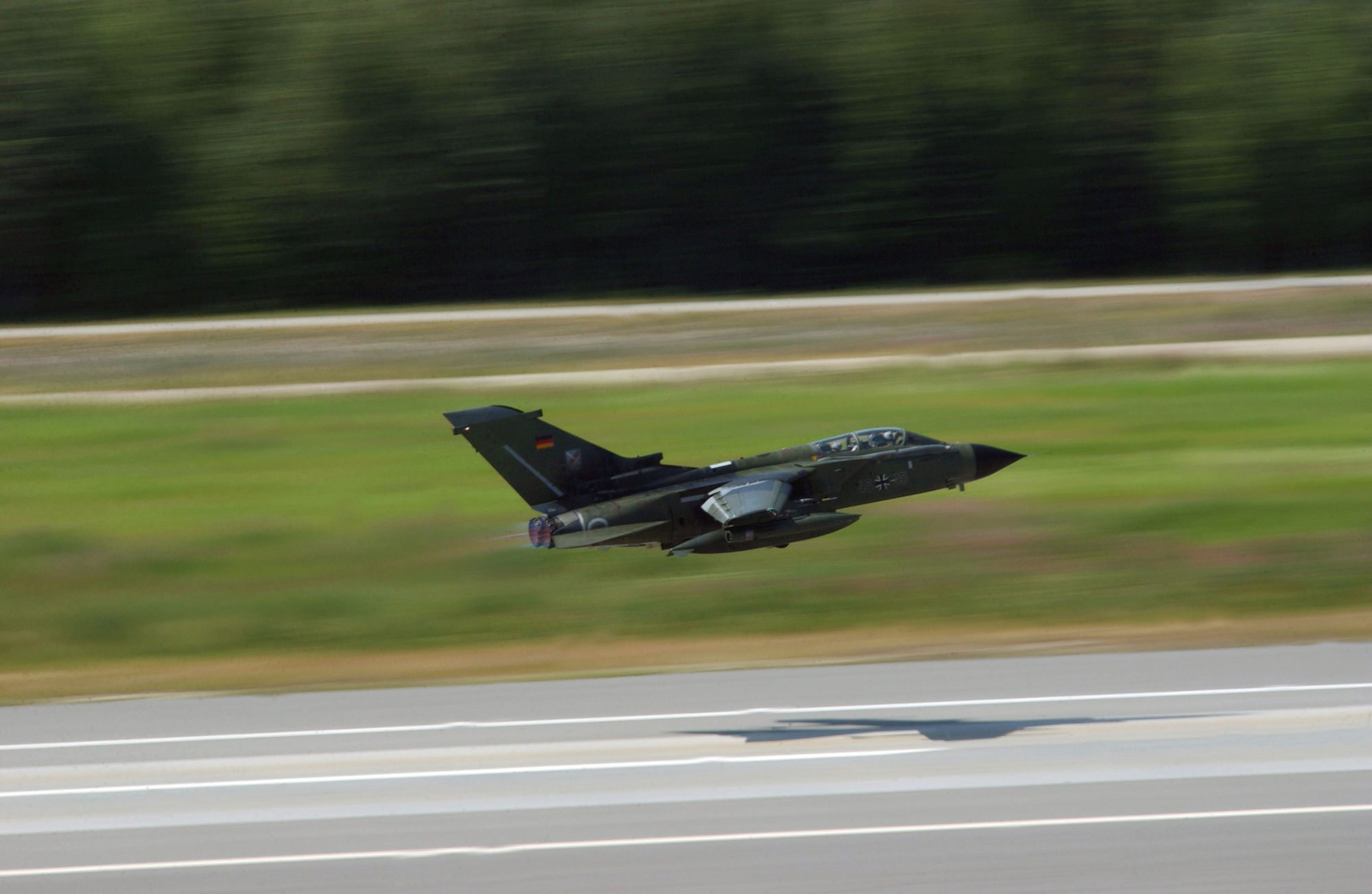 Varrelbusch (Germany): planned air base
only 13 km away 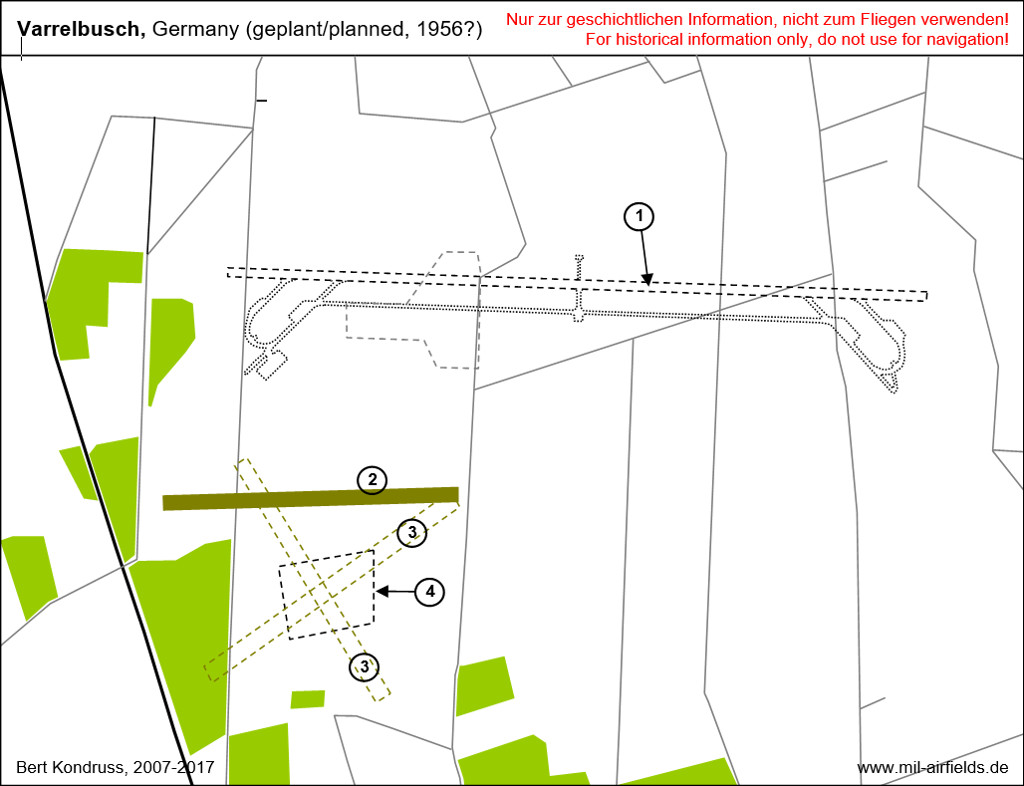 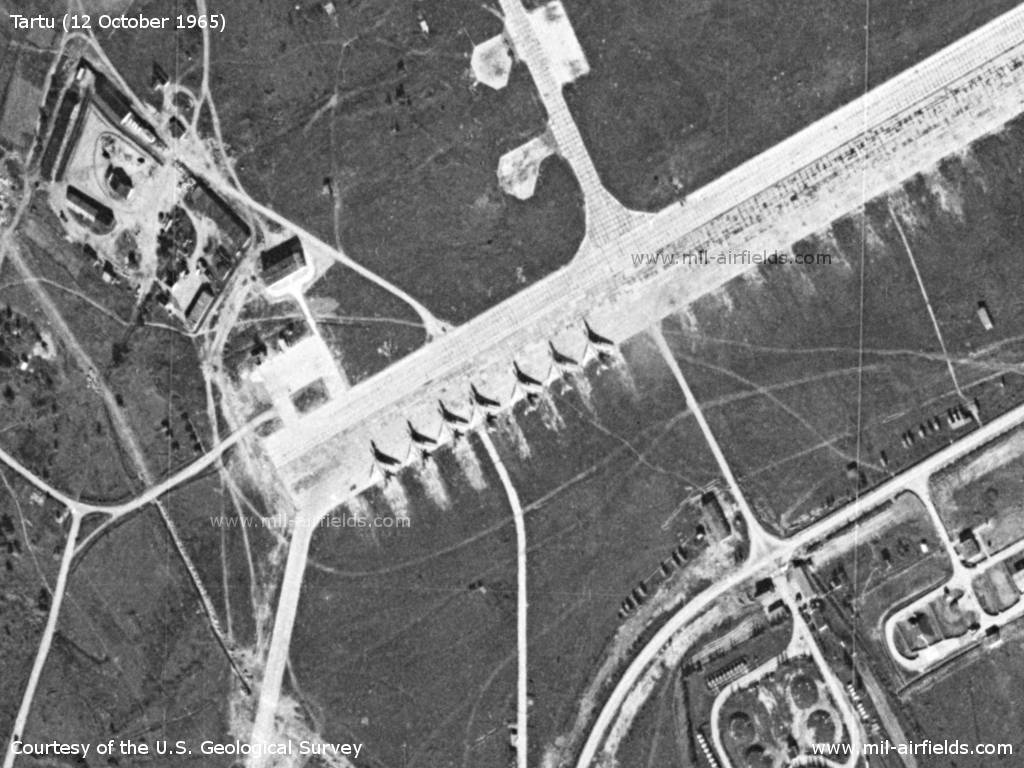