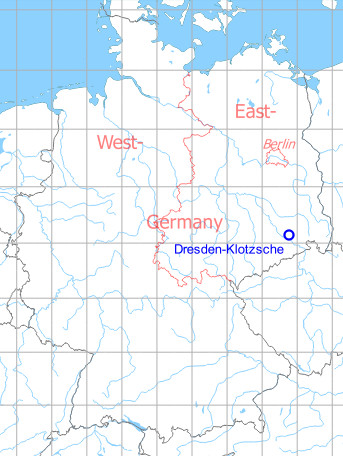 Germany during the Cold War Map
The history of the Cold War airfields: Dresden
Contents
Page 1: From the beginnings to the 1960s ← you are here
General
Location of airfield
During the 1930s
Air Base
During the Cold War
Soviet use
GDR Aircraft Plant
In the 1960s
Page 2: From the 1970s until today
In the 1970s
In the 1980s/early 1990s
In the 1990s/2000s
Today
Links
Bibliography
Related topics
Airfields in the vicinity
Categories
Page 3: Dresden Klotzsche Airport

Dresden-Klotzsche Airport was established in the mid-1930s as a replacement for Dresden-Heller Airport and as an air base with the Luftkriegsschule, with buildings located about 1 km east of the airport. At the beginning of the Second World War, the field was solely used for military purposes.
In 1945 the airfield was occupied by Soviet troops which stationed various flying and non-flying units here in the course of the next few years. In the mid-1950s, Dresden-Klotzsche was gradually transferred to GDR administration, where the Dresden aircraft factory was built. Initially, aircraft of the type Ilyushin Il-14 were manufactured under licence, but with the Baade 152, an own commercial jet aircraft was under development. After it became apparent that the 152 was not going to have any commercial success, the ambitious aircraft construction for the economically weak GDR was completely discontinued in 1961. The aircraft plant was converted into the Dresden Aircraft Maintenance Plant (FWD), which carried out maintenance on military aircraft for the East German air force until the end of the GDR in 1990, but also for other countries, e. g. from the Middle East.
In addition to the aviation industry, the transport aircraft Ilyushin Il-14 and later Antonov An-26 of the East German National People's Army (NVA) were stationed in Dresden, which flew in the later Transport Squadron 24 (TS-24). From the beginning of the 1960s onwards, civil air traffic developed again in Dresden. The GDR airline Interflug flew from here to various destinations in the Eastern Bloc.
After reunification, the airport was expanded and adapted to the requirements of modern air traffic. Among other things, a new runway was built, which is located directly west of the old runway, which was then demolished. For a few years, Dresden also remained a base of the German Air Force. A large aircraft maintenance plant is still at the airport.

The airfield is located north-north east of Dresden.

Dresden Klotzsche was opened in the mid 1930s and was used as a commercial airport and military airfield.

The timetable for spring/summer of 1939 shows the following scheduled flights:
(Days: 1=Monday ... 7=Sunday)

Departures and arrivals by time 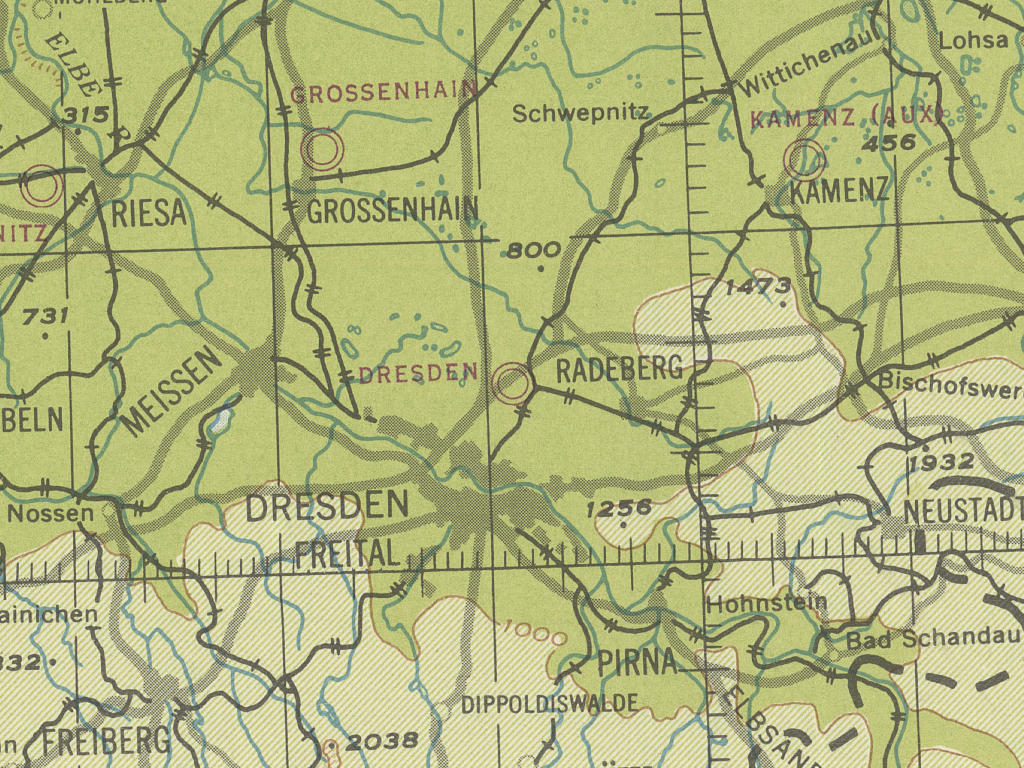 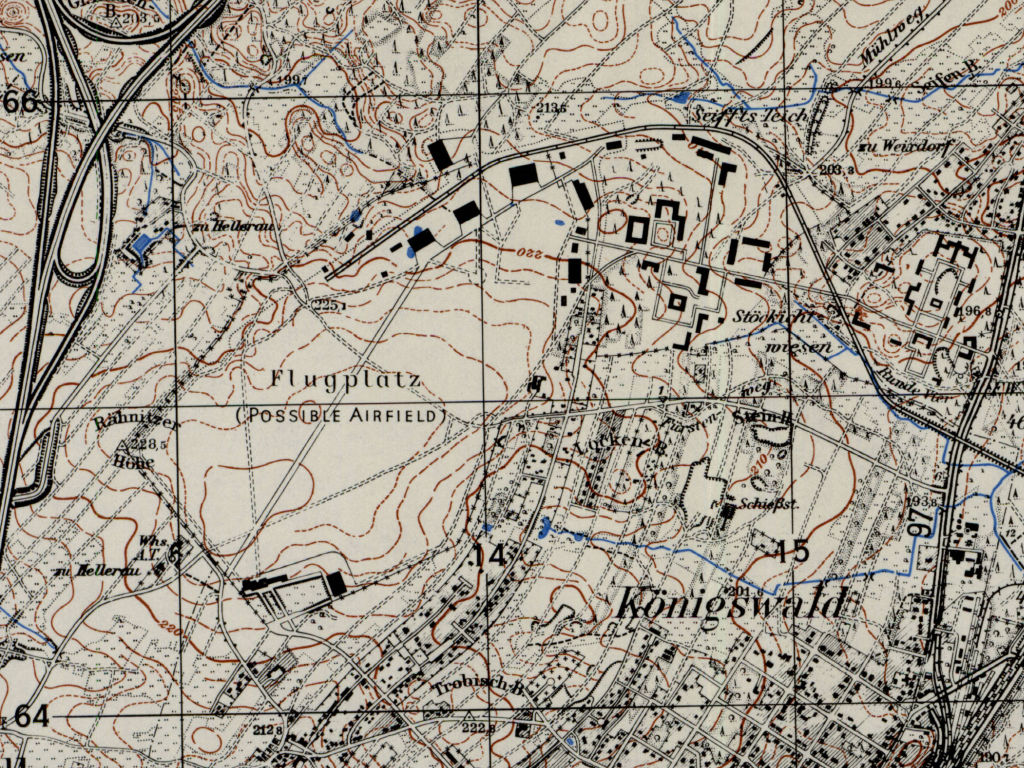 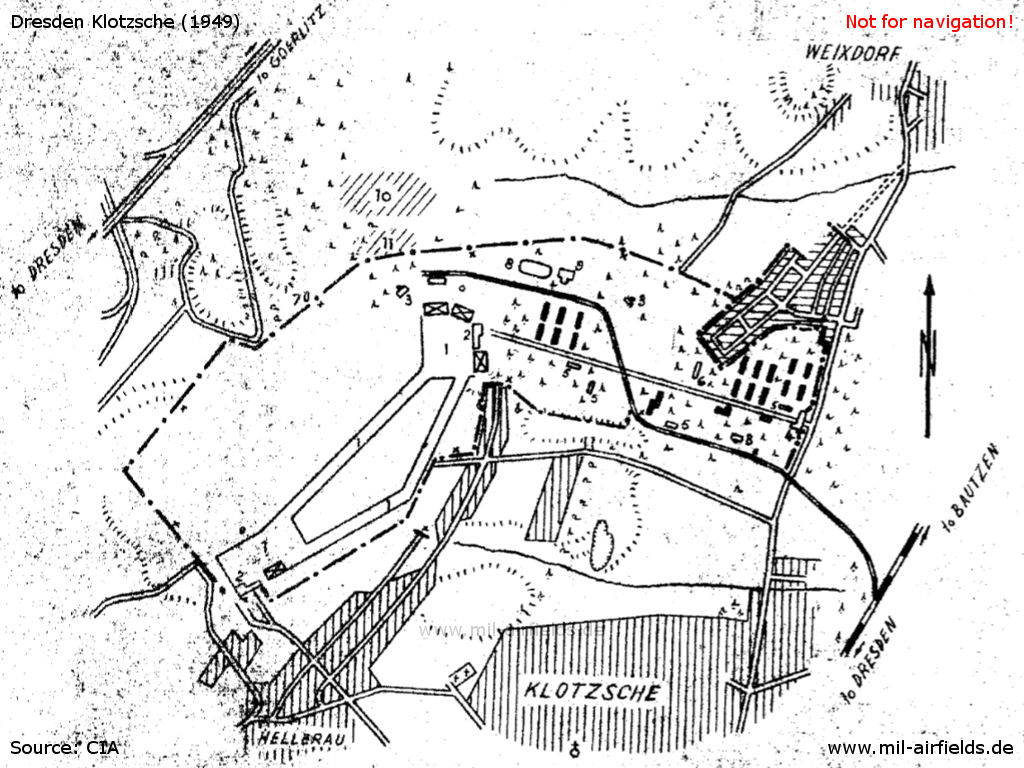 Sketch of the Dresden-Klotzsche airfield, which was used by Soviet troops at that time, about 1949
Source: CIA

From the mid-1950s onwards, the airfield was expanded to house the Dresden Aircraft Plant. On 04 March 1959, the prototype of the 152 jet airliner with the registration DM-ZYA crashes near Dresden. In 1961 the construction of aircraft ceased. 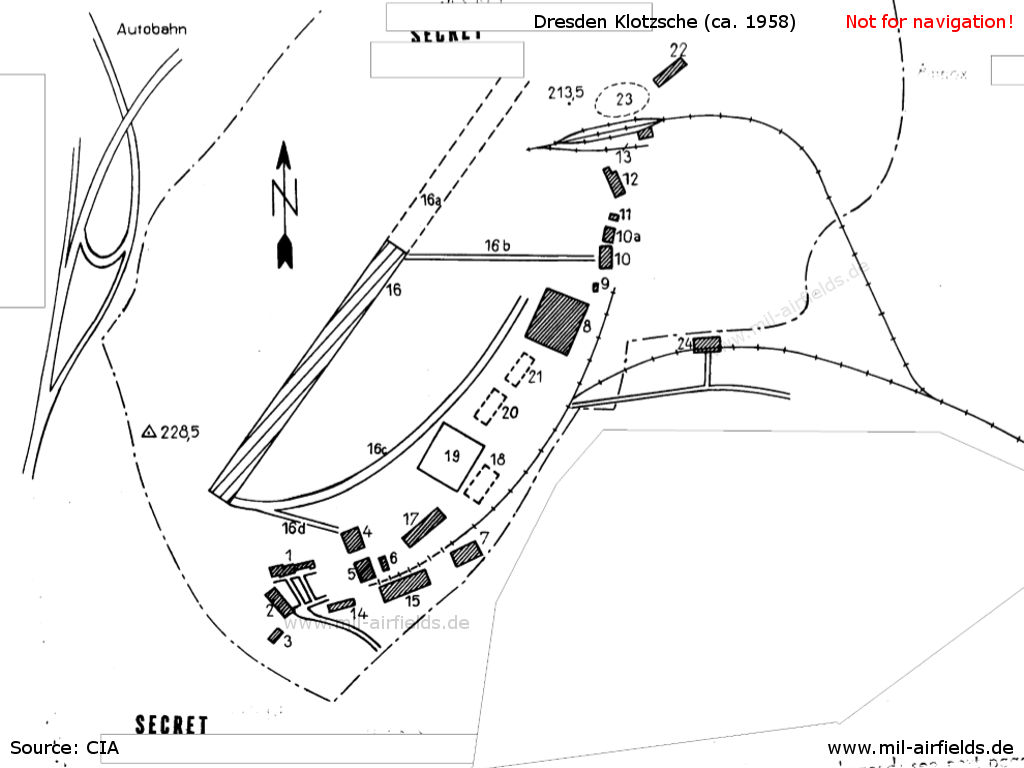 Sketch from the time of the expansion of the airfield and the aircraft works, ca. 1958 - The runway (no. 16 in the sketch) had a length of 1000 m at this time, but the further extension towards the northeast (16a) was in progress.
Source: CIA 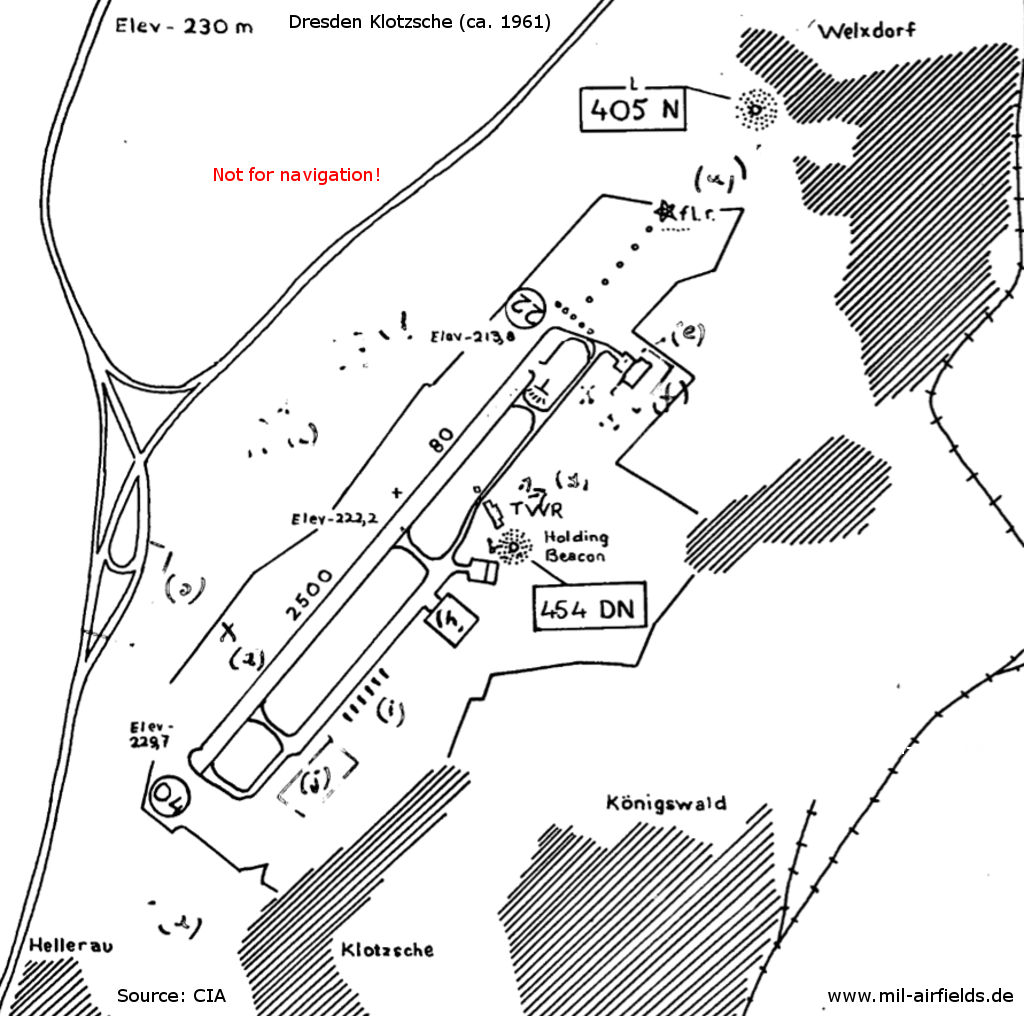 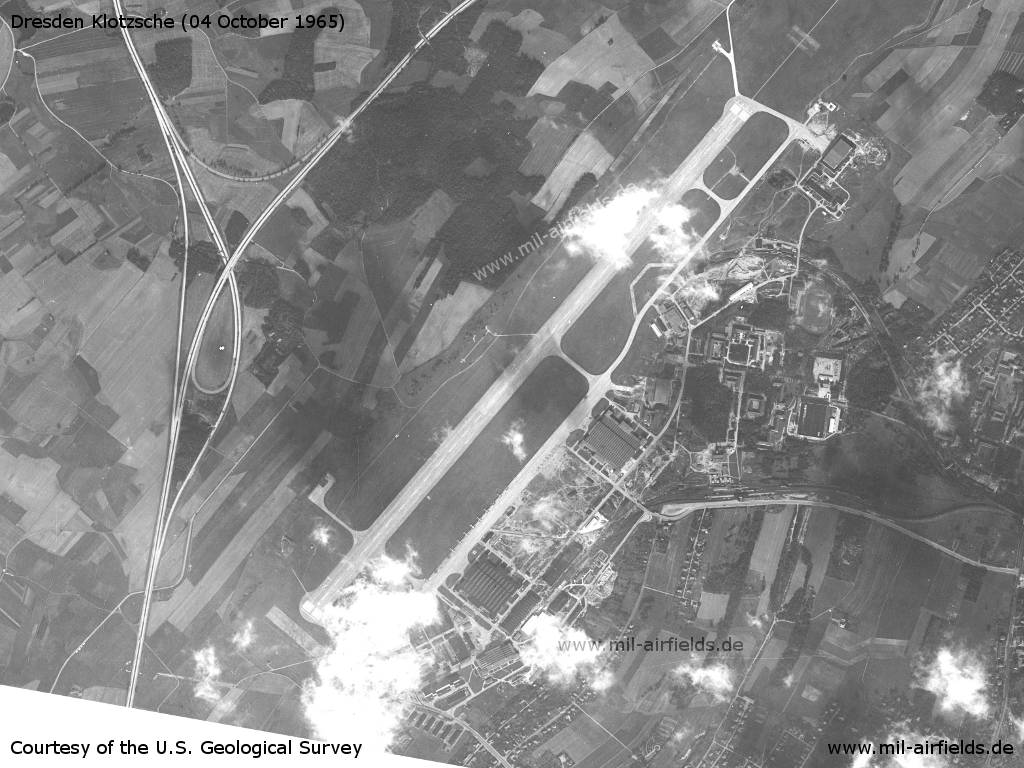 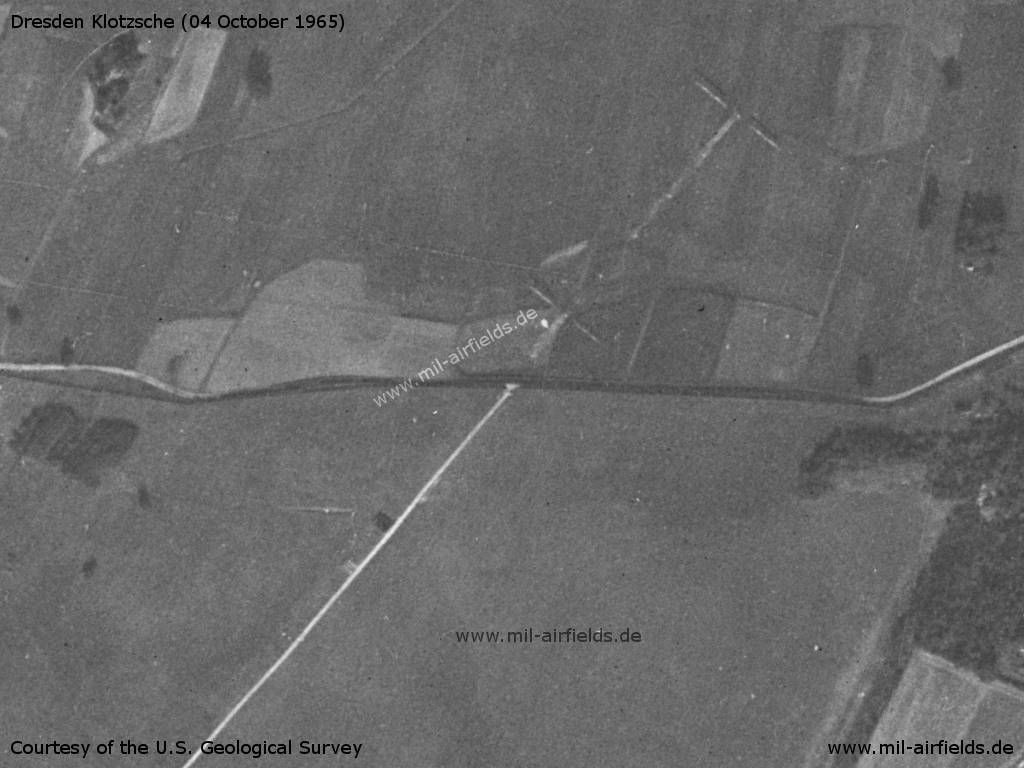 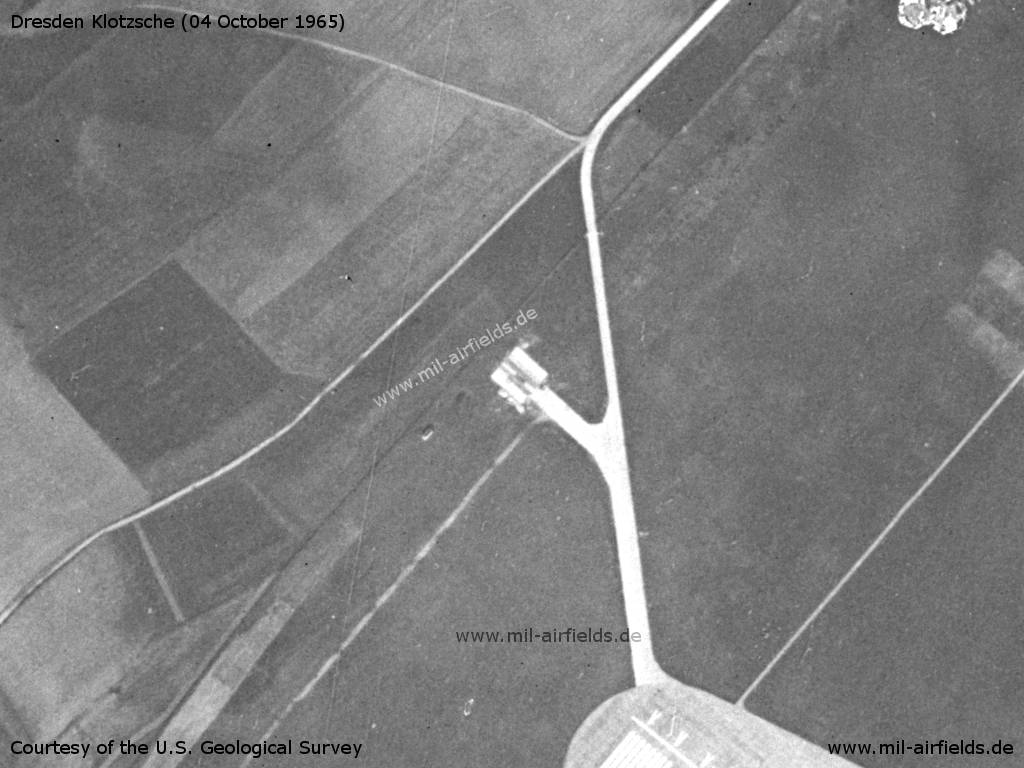 Platform at the northen end of the runway - Further north is the connection to the autobahn, presumably for the nearby Weixdorf Highway Strip, which is prepared for aircraft operations.
Source: U.S. Geological Survey 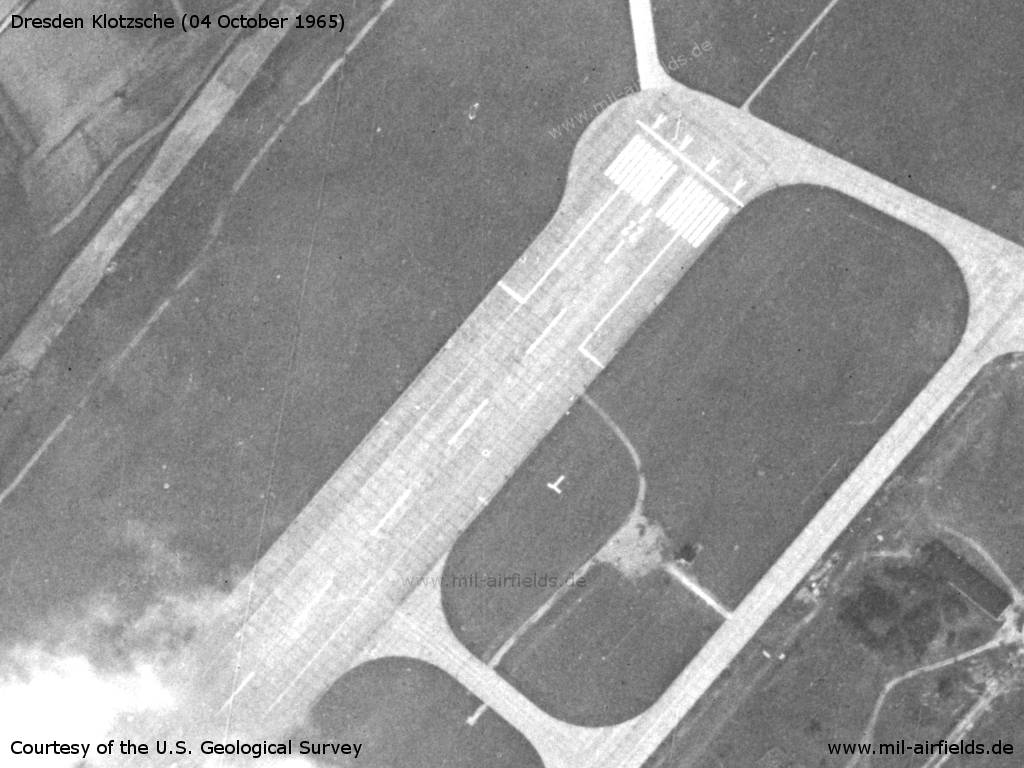 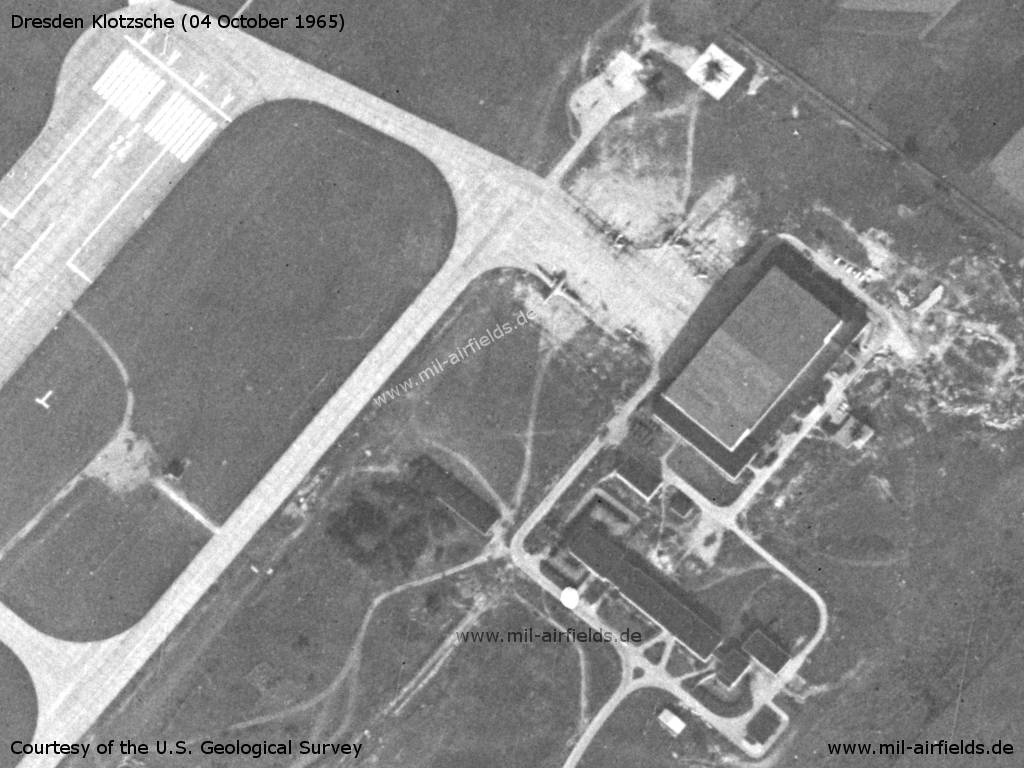 Hangar at the northeast end, in front of it an Il-14 and other airplanes. - A helicopter appears to be standing on the platform at the top of the picture
Source: U.S. Geological Survey 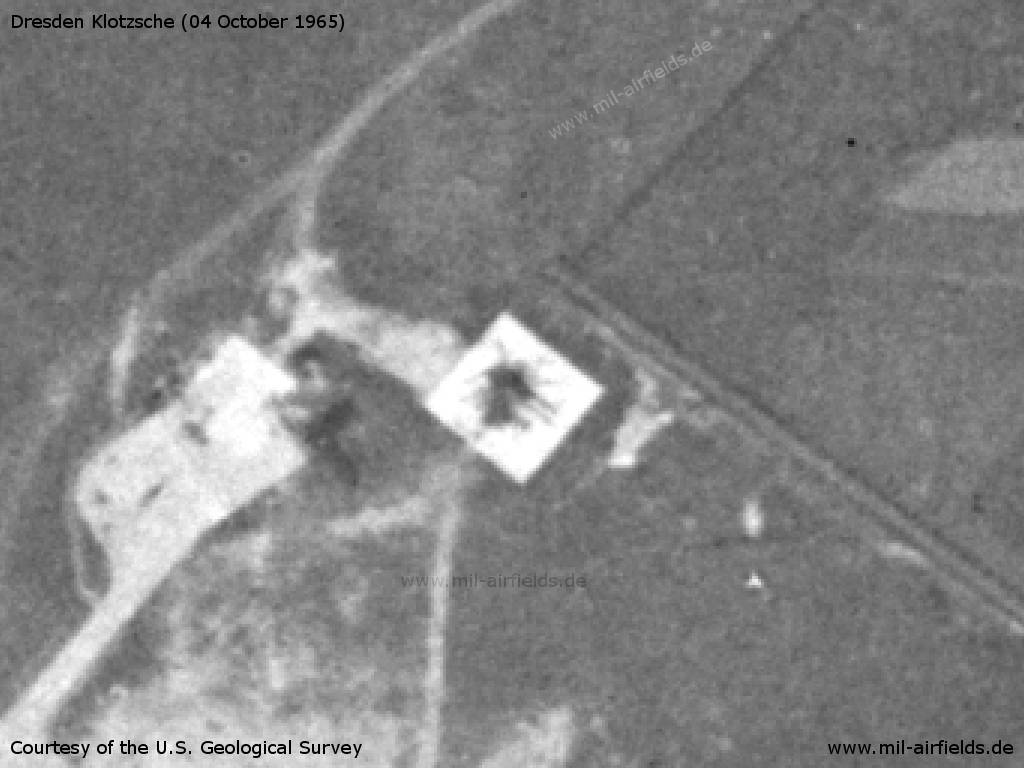 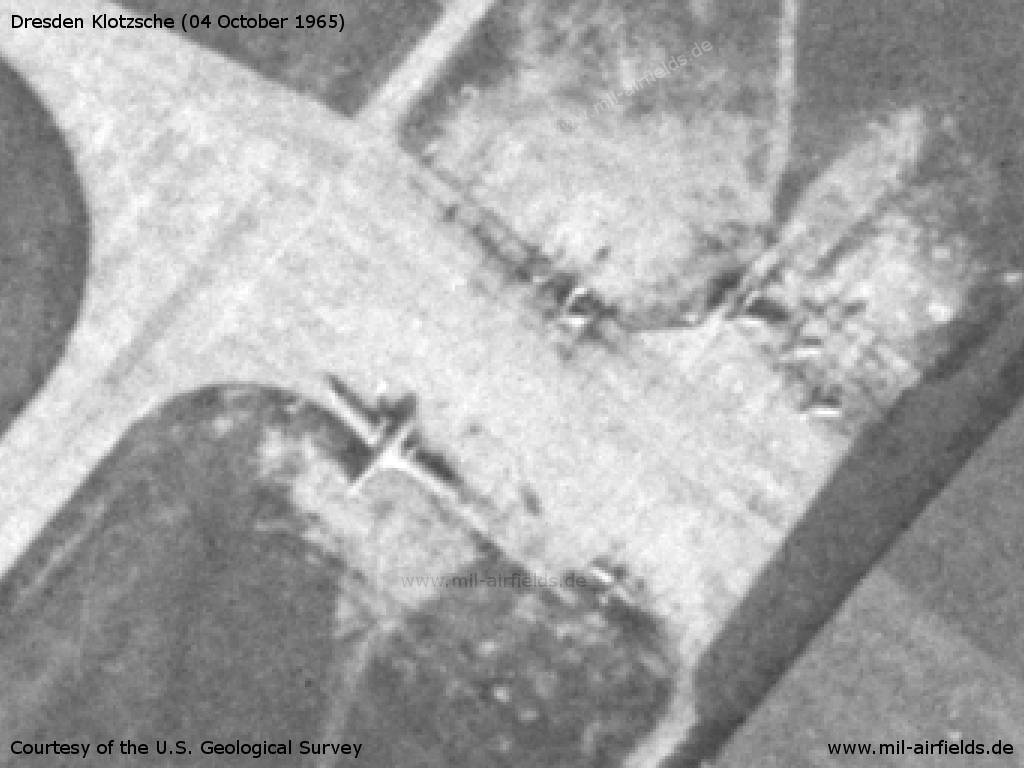 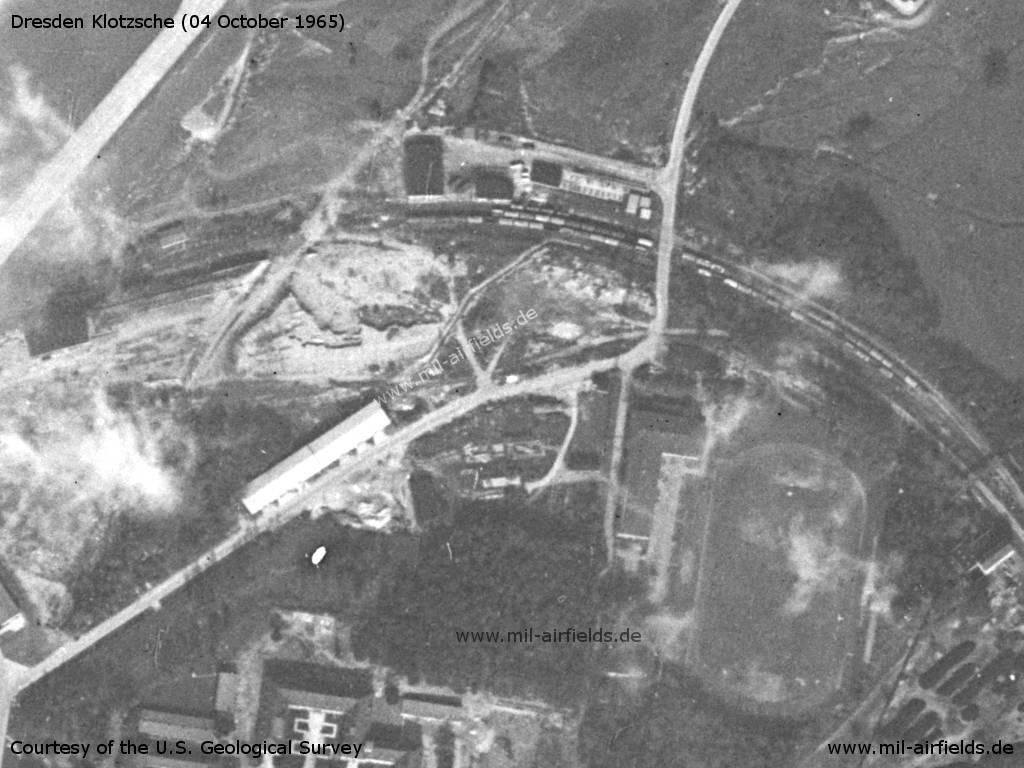 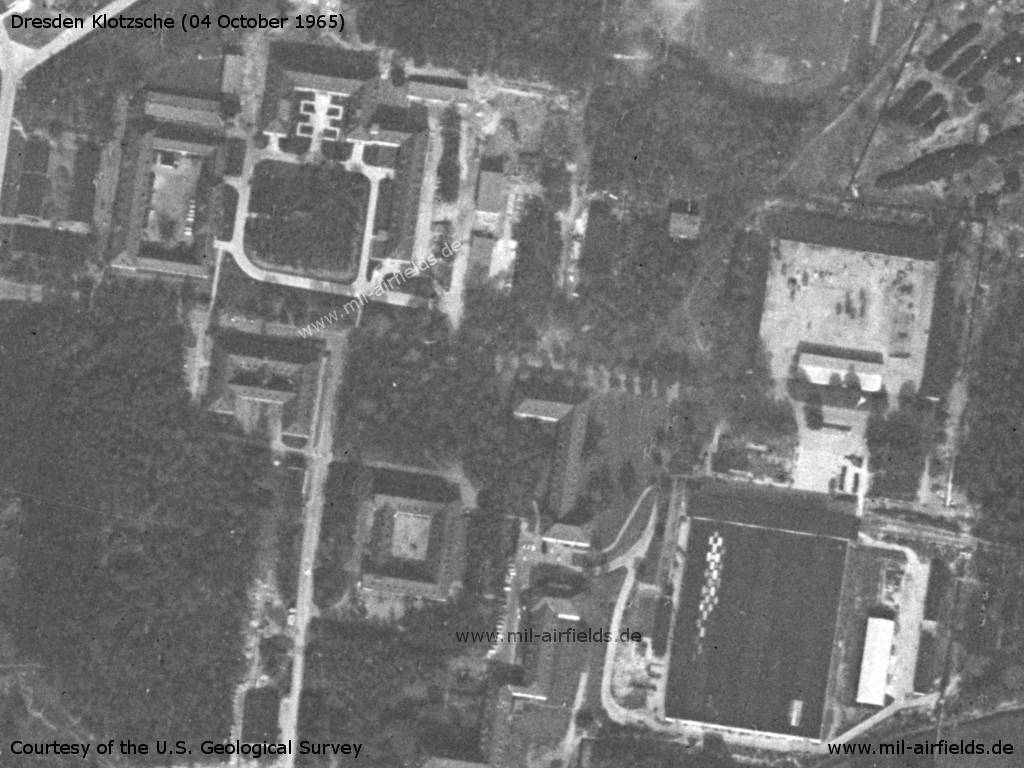 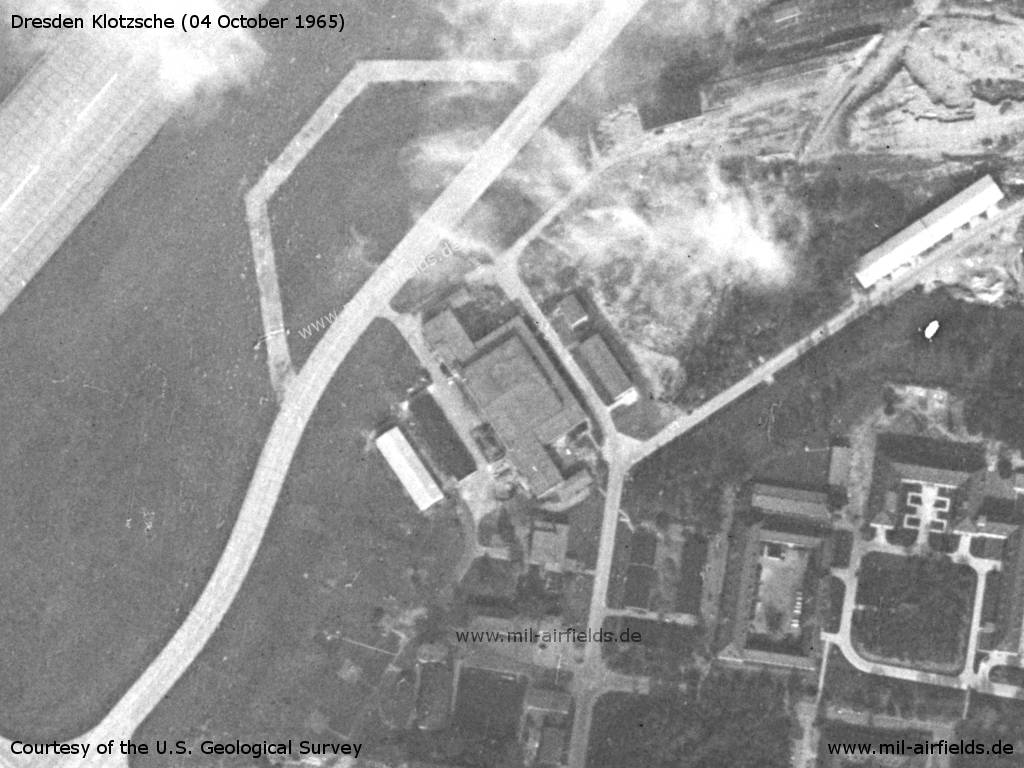 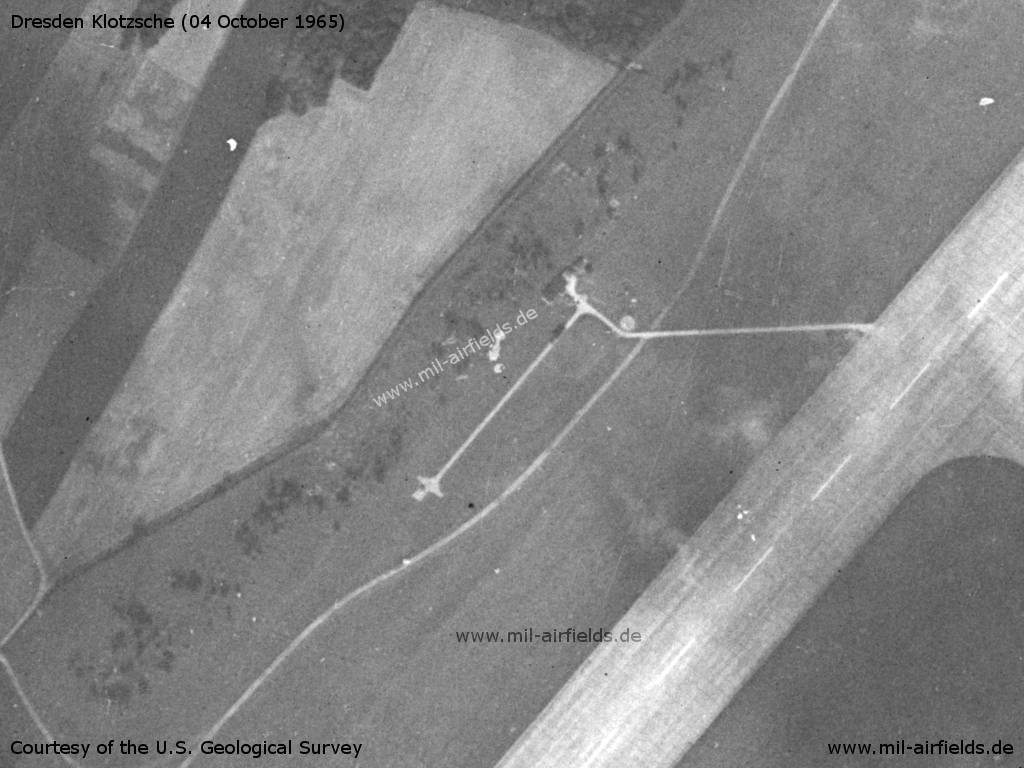 On the western side of the runway there are several installations, probably radar facilities
Source: U.S. Geological Survey 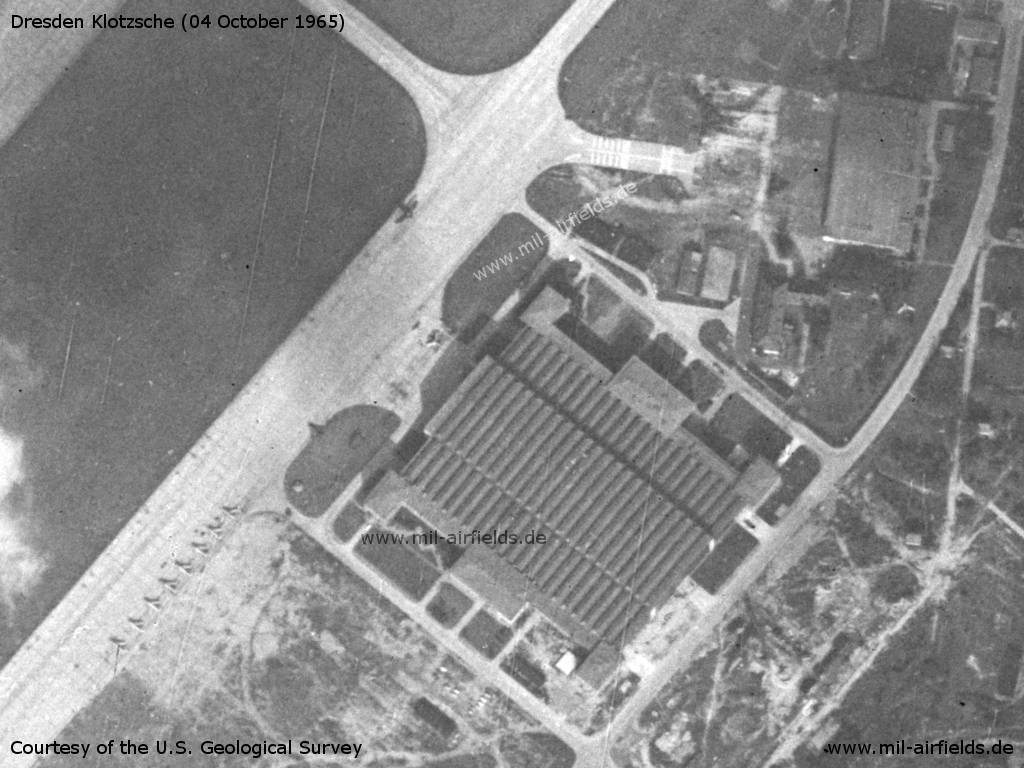 Northern large hangarl. There are 9 fighter planes and an An-2 (?) - An arrow-shaped object is visible to the right between the hangars. It could be another plane, possibly decommissioned. Interesting is the strip-shaped marking on the taxiway in front of the hangar in the upper right-hand corner.
Source: U.S. Geological Survey 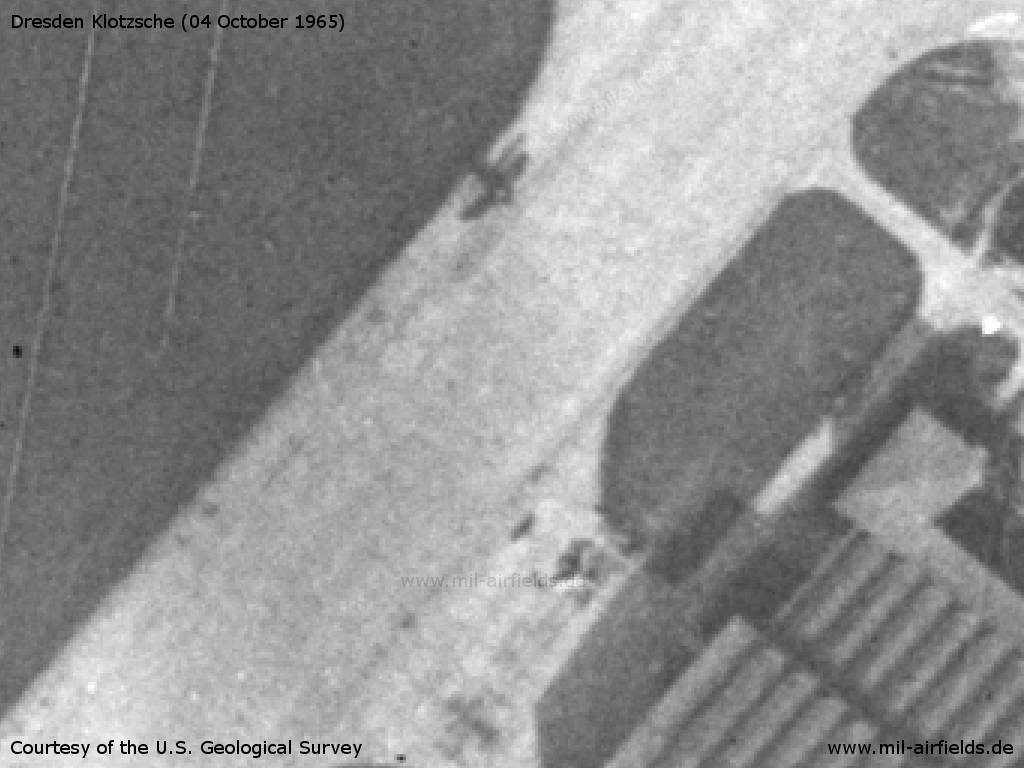 Detail: An-2 at the edge and fighter plane in front of the hangar
Source: U.S. Geological Survey 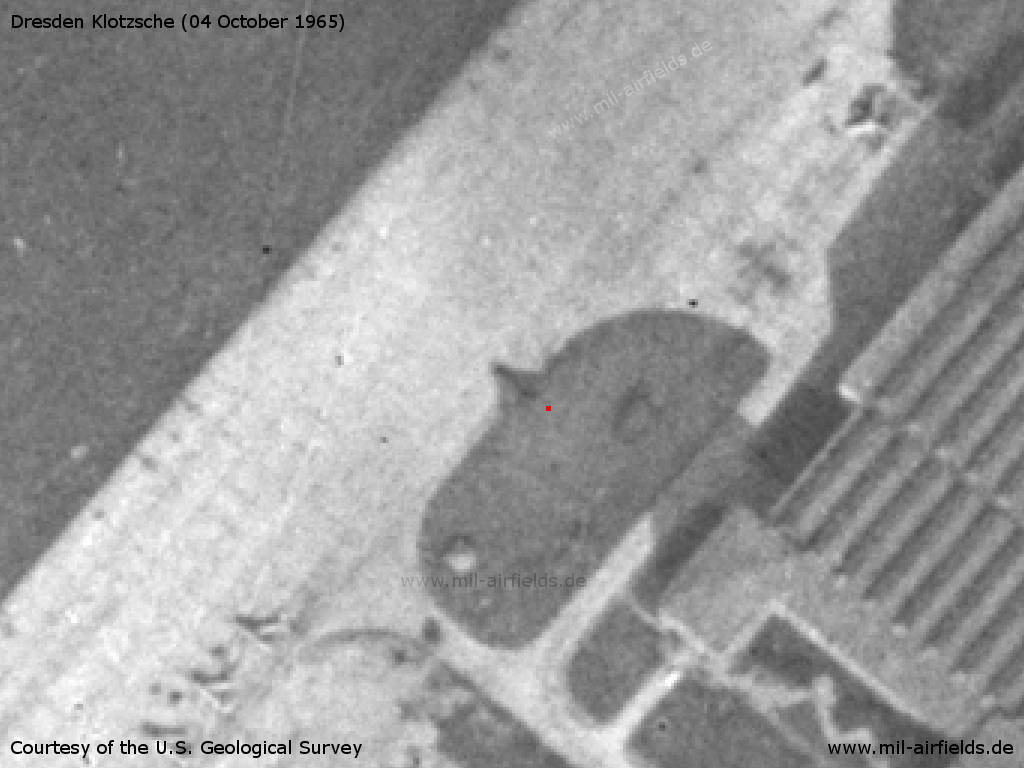 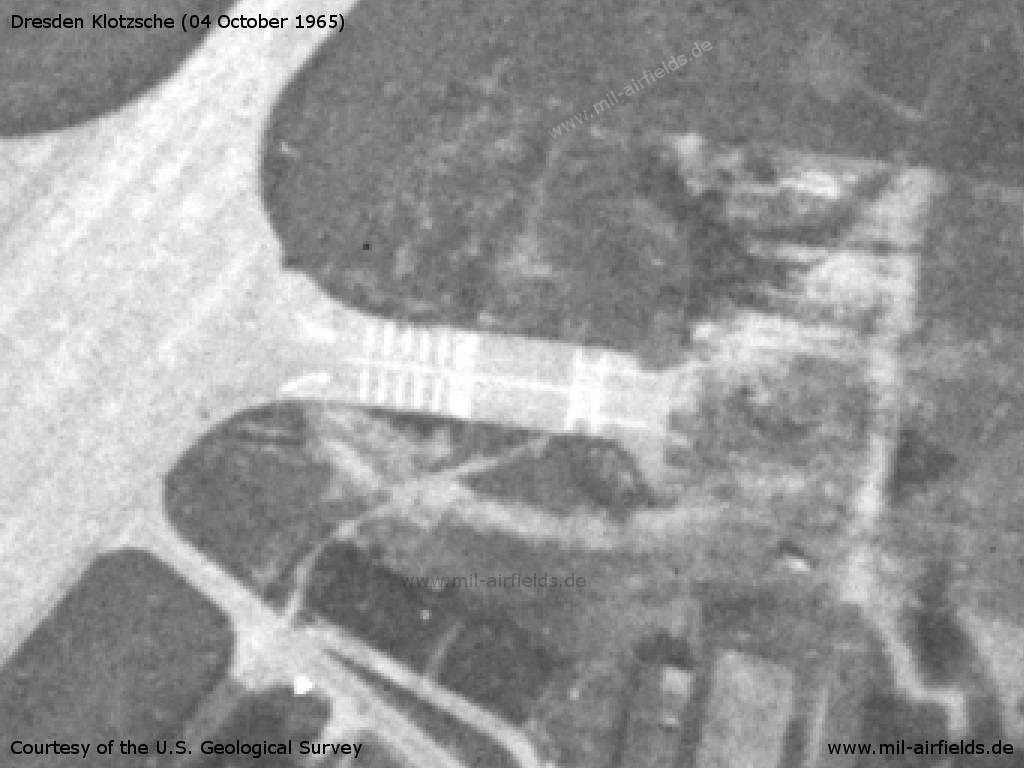 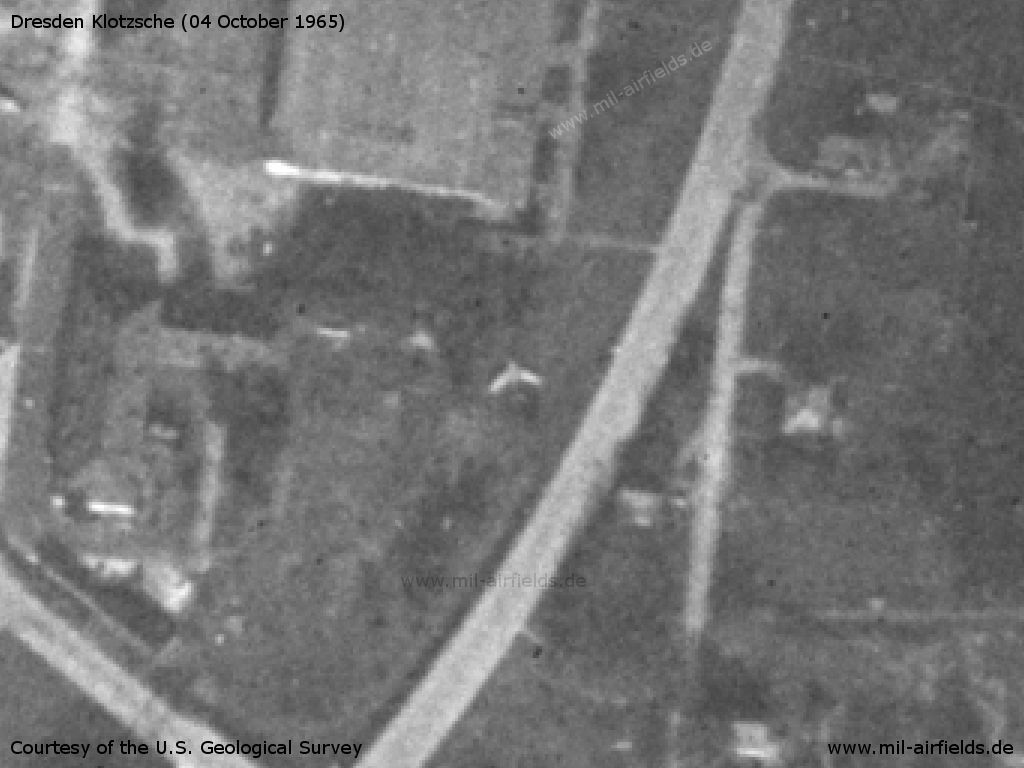 Detail: MiG aircraft in the area behind the hangars
Source: U.S. Geological Survey 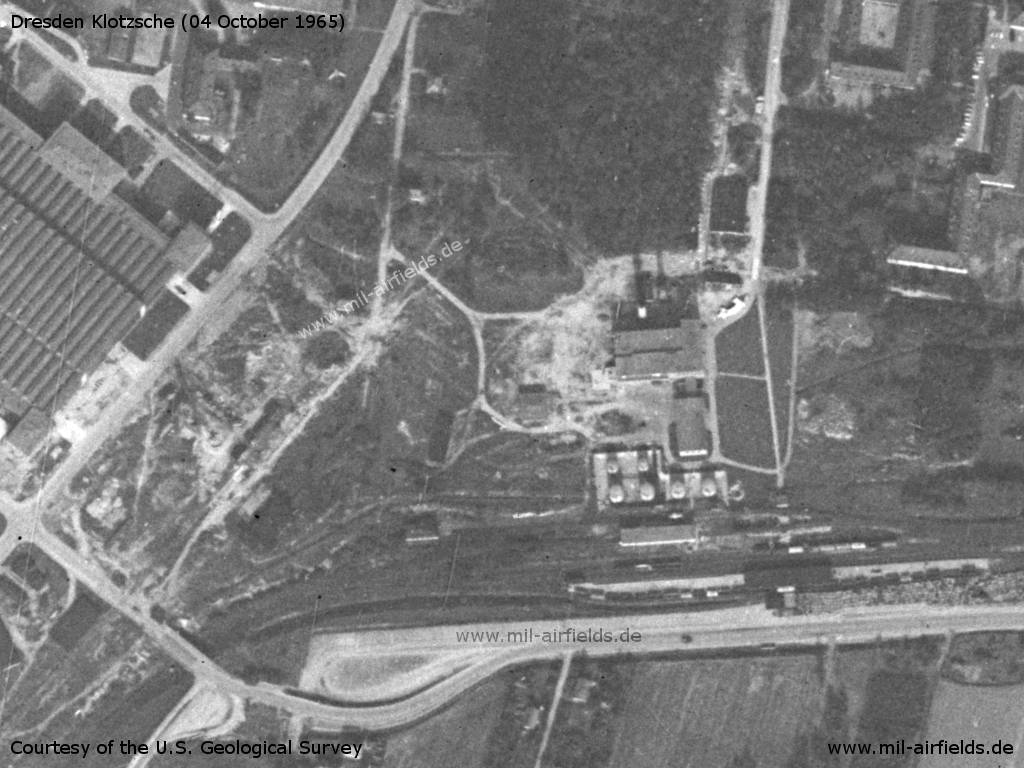 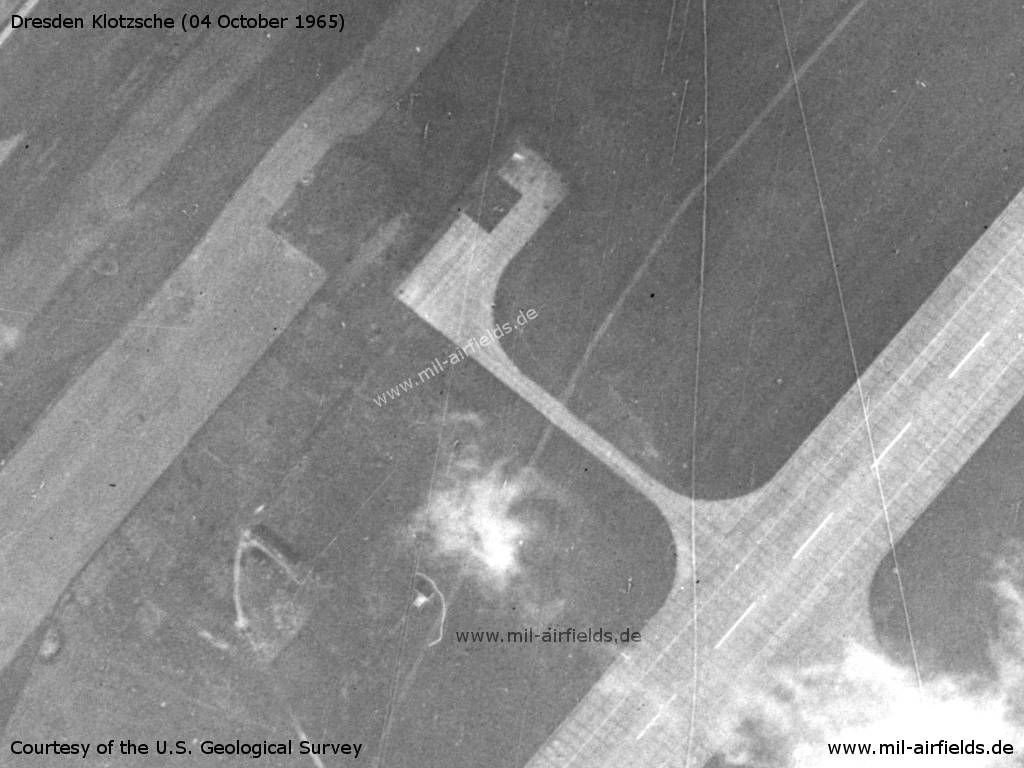 The platform at the southwest end is empty
Source: U.S. Geological Survey 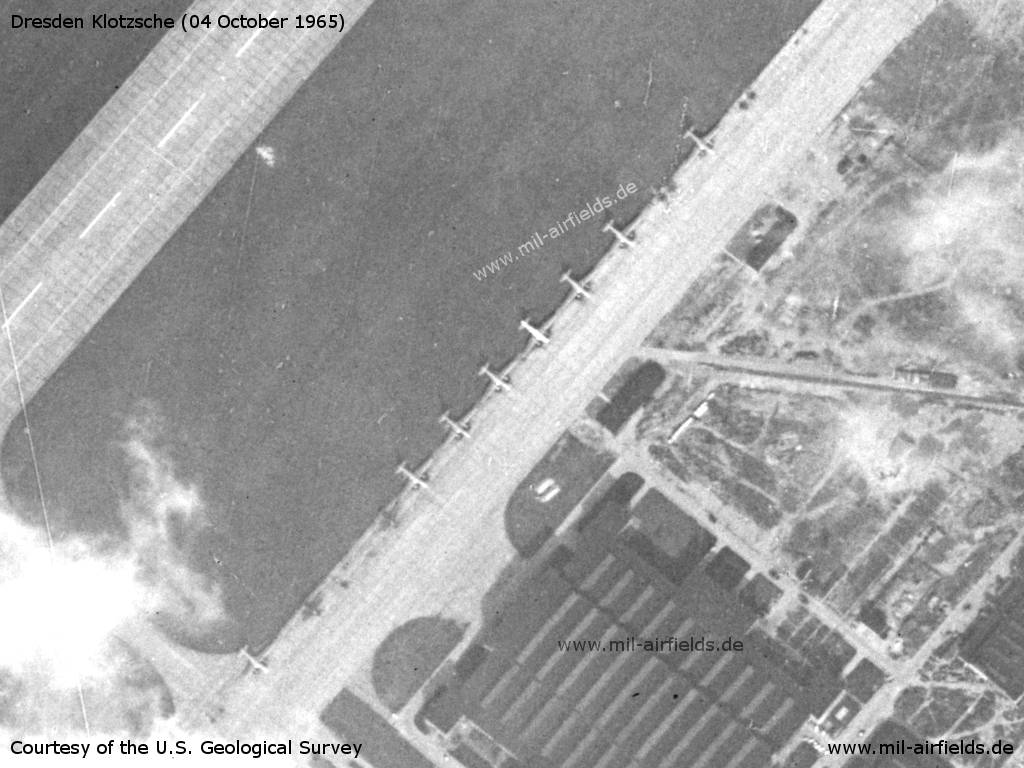 On the military apron of the East German National People's Army (NVA) there are 8 aircraft Il-14 and 2 An-2
Source: U.S. Geological Survey 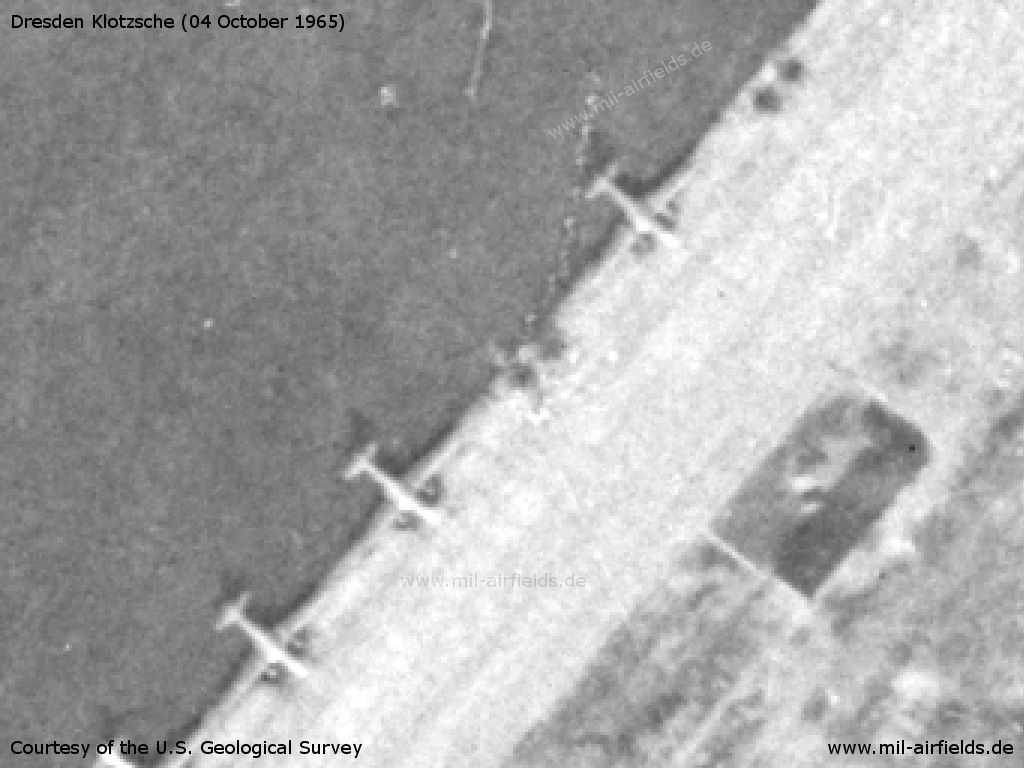 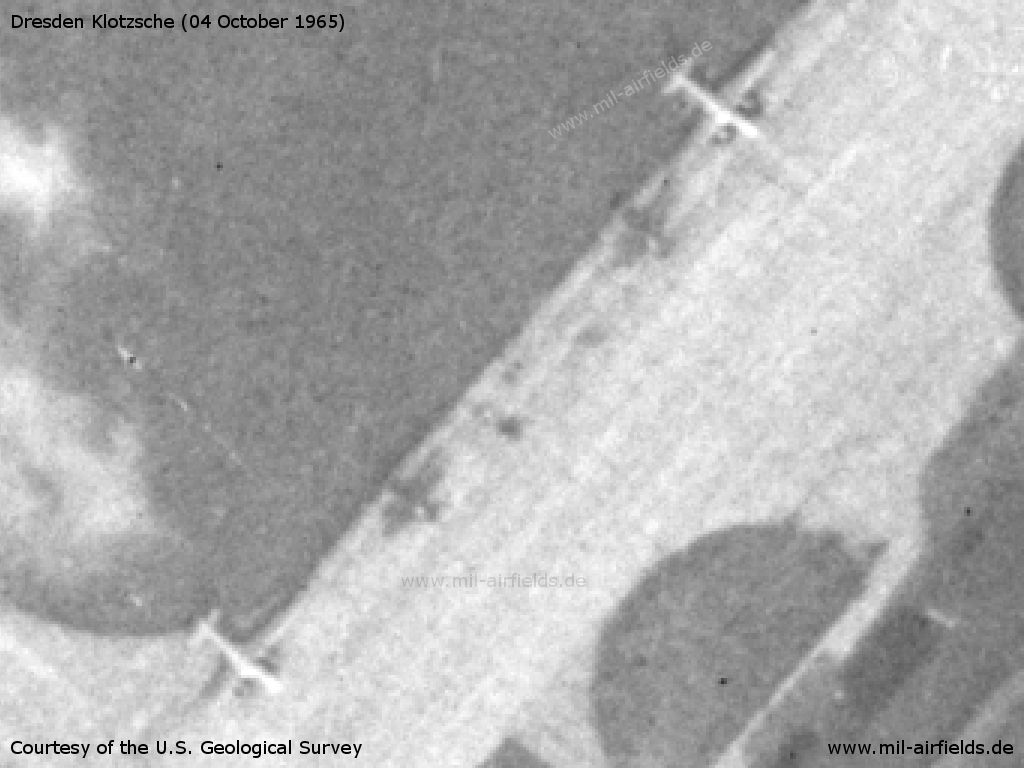 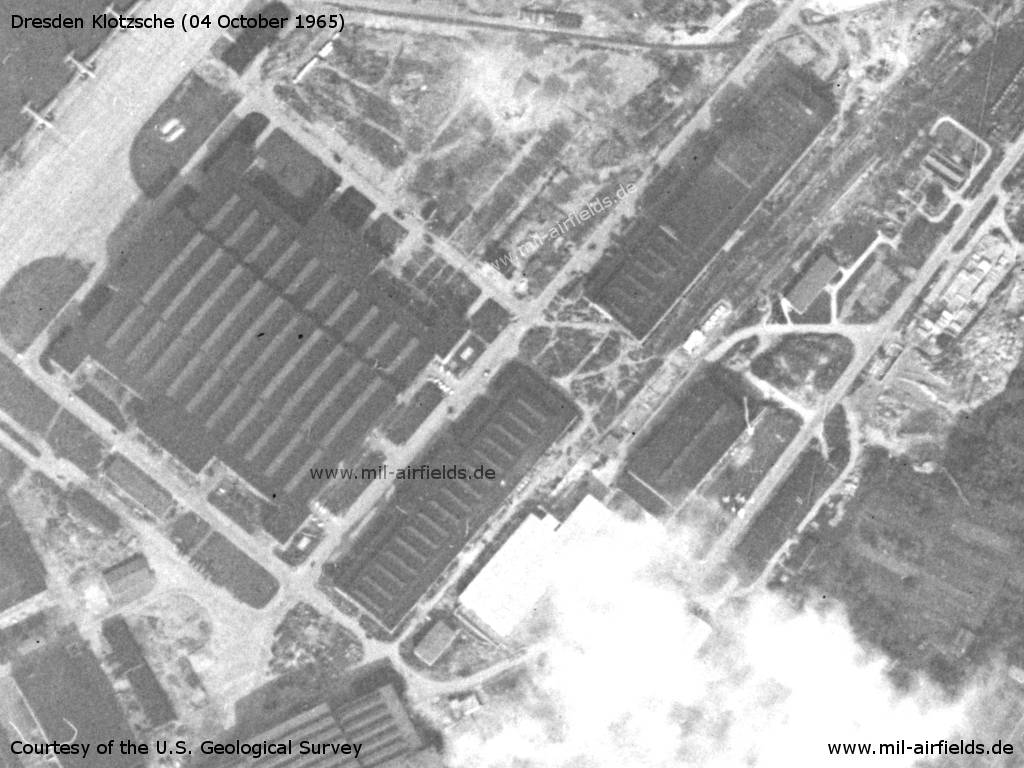 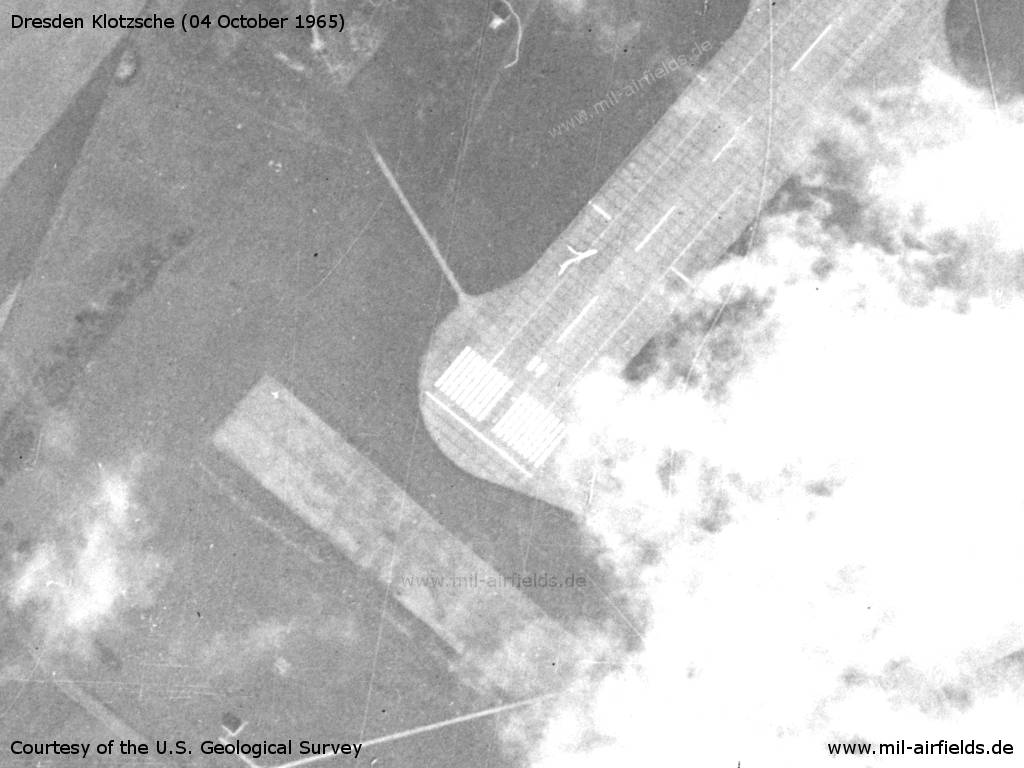 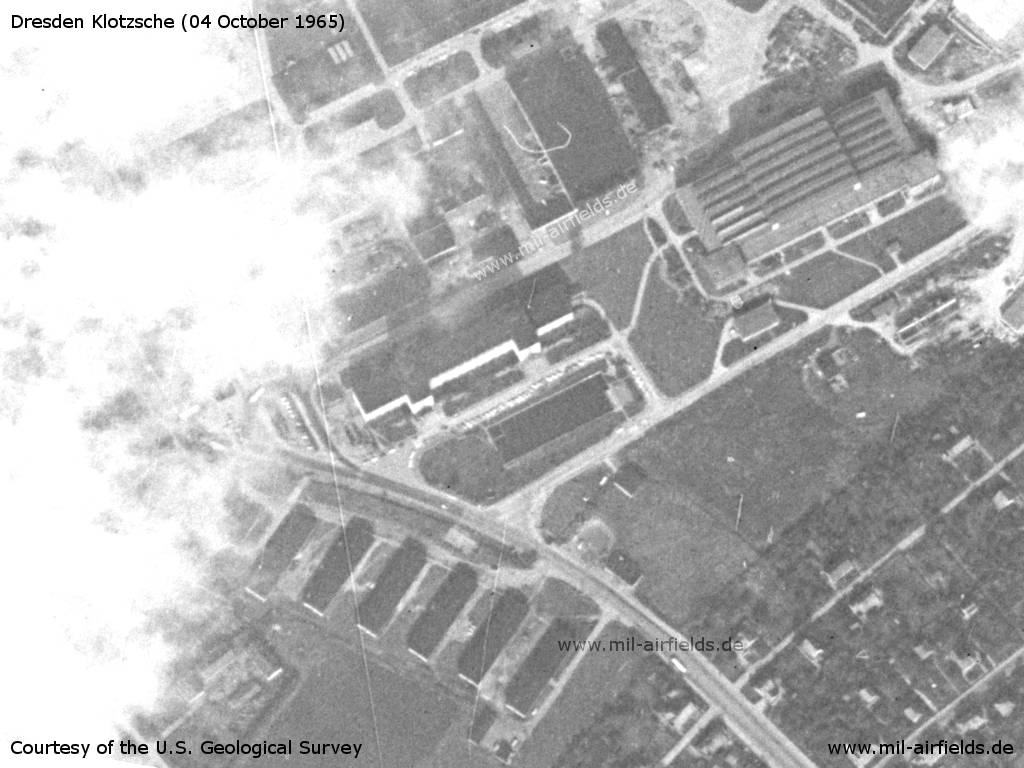 The facilities in the southern part of the field are only partially visible due to clouds.
Source: U.S. Geological Survey
Contents
Page 1: From the beginnings to the 1960s ← you are here
Page 2: From the 1970s until today
Page 3: Dresden Klotzsche Airport
Diese Seite auf Deutsch