Diese Seite auf Deutsch
For historical information only, do not use for navigation or aviation purposes!
The history of the Cold War airfields: Fulda

Fulda was an US Army airfield, which was used as a helicopter base until the early 1990s. It was located at the strategically important Fulda Gap, which was viewed by the West as a probable place for a Soviet tank attack because the potential deployment area of the East in Thuringia offered the shortest route to the important Rhein-Main area in the west. Therefore, many transport, observation and combat helicopters were stationed in Fulda.
The airfield was located just 19 km from the inner-German border and was geographically within the Air Defense Identification Zone (ADIZ), the air surveillance zone along the demarcation line. However, the area around the airfield was exempted from the ADIZ to an altitude of 2,000 feet, probably to simplify flight operations. Today, the airfield is closed and the new district Fulda-Galerie is located on the site. The former control tower and the fire brigade building are still preserved. 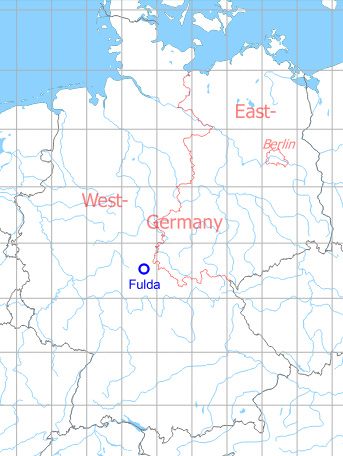 Germany during the Cold War 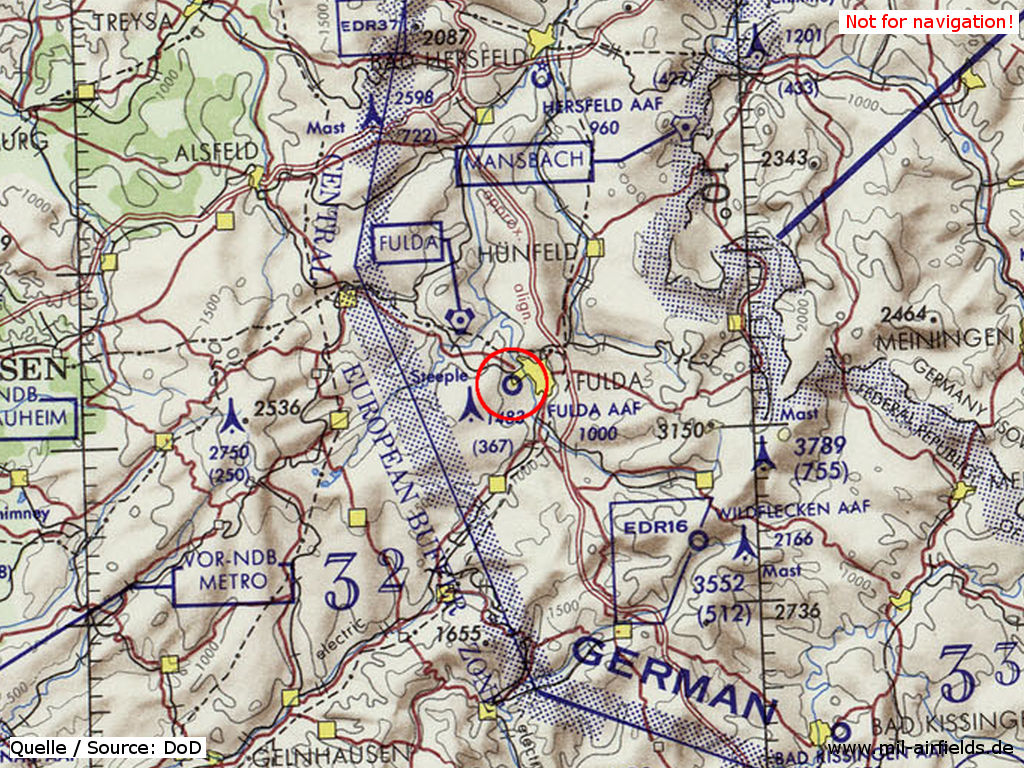 Fulda Army Airfield AAF on a map of the US Department of Defense from 1972 - The blue dotted strip about 20 km east of Fulda is the inner-German border. The blue line about 11 km west of the field is the regular ADIZ border. The hexagonal symbol 8 km north-west is the radio beacon Fulda VORTAC. 32 km north-east of the airfield stands the Mansbach TACAN at the beginning of the southern corridor to Berlin. (ONC E-2 (1972), Perry-Castañeda Library Map Collection, University of Texas at Austin /PCL MC/) 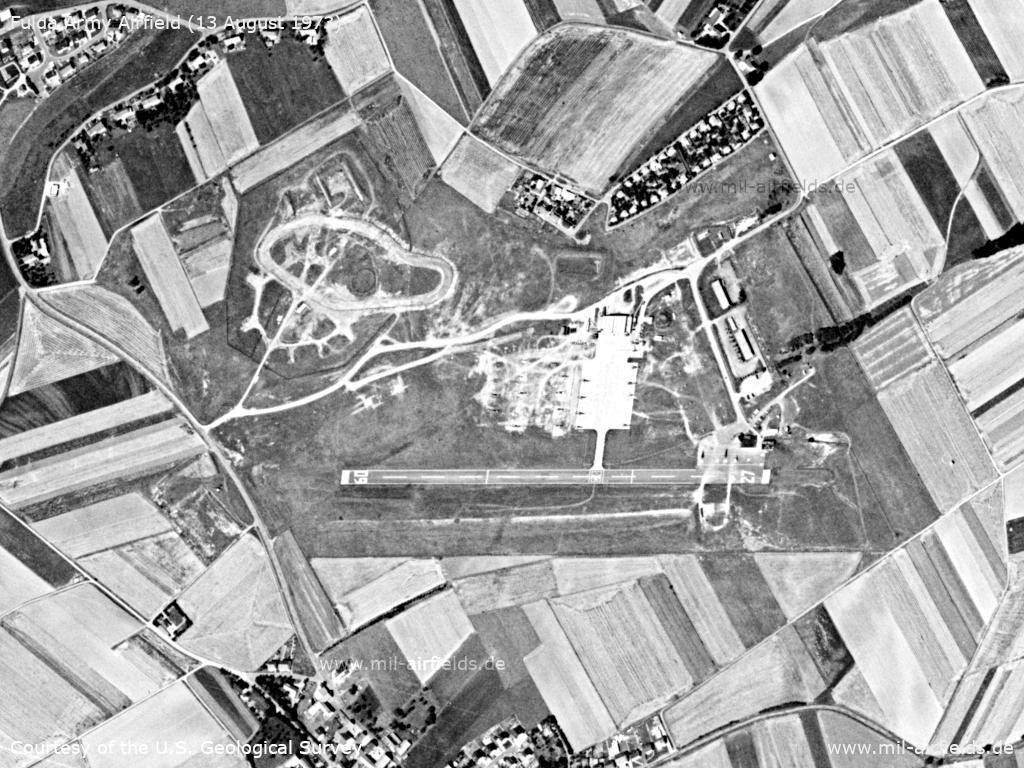 Fulda Army Airfield on a US satellite image from ... - The Hawk anti-aircraft missile site adjacent to the northwest appears to be empty.
Source: U.S. Geological Survey 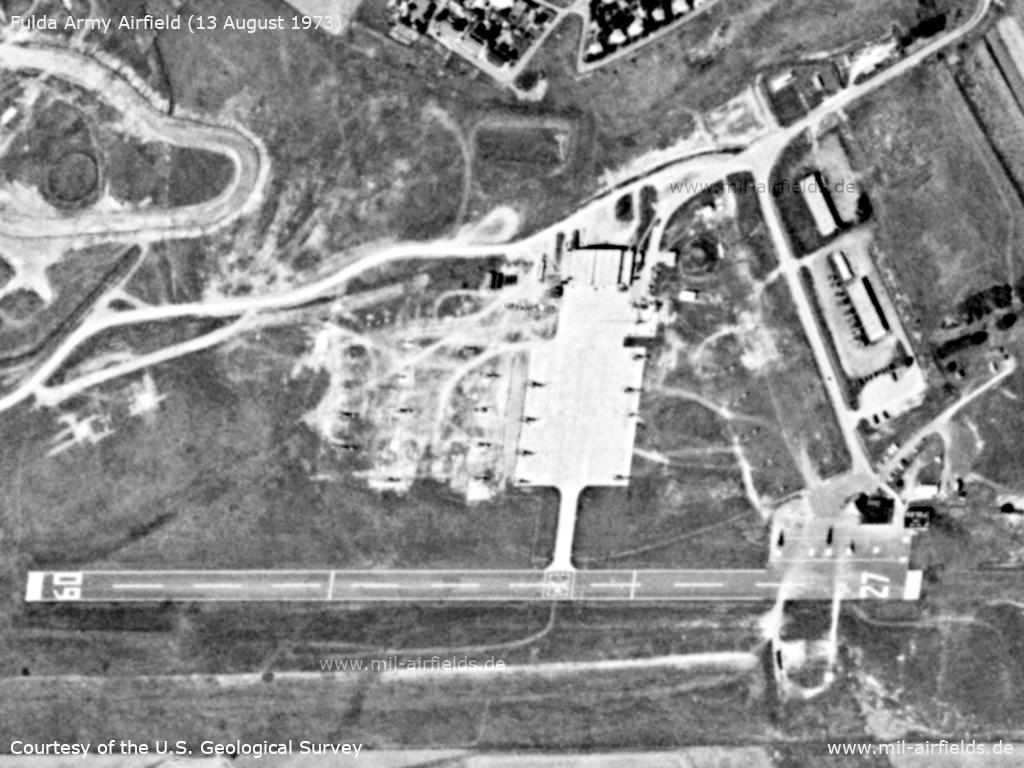 Enlargement - There are about 20 helicopters in the picture.
Source: U.S. Geological Survey 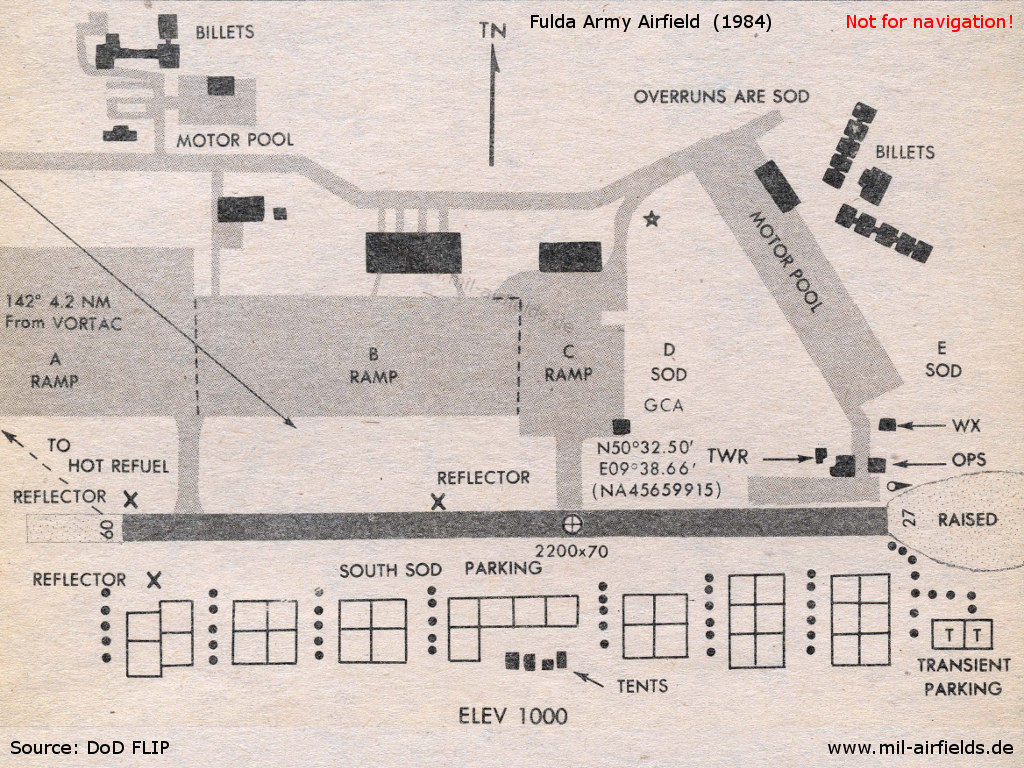 Airfield map from 1984 - Compared with the images from 1973, the facilities have been significantly expanded. More paved parking areas have been added in the north (Ramp A and B), and helicopters can be parked in the grass in the south (South sod parking).
Source: US DoD

The airfield had a rotating airfield beacon. The runway had lights on the sides.

Since the end of the 1970s, Fulda had had an approach radar with an Aerodrome Surveillance Radar (ASR) and a Precision Approach Radar (PAR).

Closed. On the site, the Fulda-Galerie district has been created.