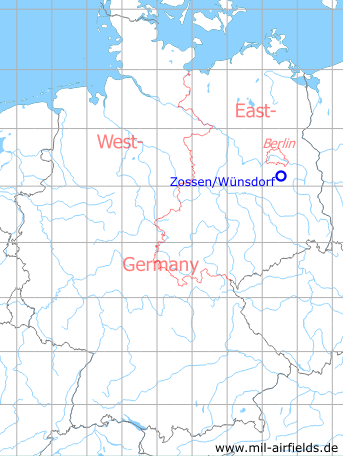 Zossen/Wünsdorf was a small landing site at the headquarters of the Soviet occupation troops in Germany, located south of Berlin. It was used by liaison planes and helicopters. Today the field is closed.

Landing ground at the Soviet HQ.

1. A new landing ground appears to have been constructed at a point approximately 3 km due east of the Stammlager. The landing ground is on a section of high ground to the east of the Kallinchen-Zehrensdorf road.
2. During the last week of May 1957, three helicopters were seen using the landing ground each day.
3. Three aerial masts approximately 15 to 20 meters high were positioned close to a "T"-shaped building on the landing ground. Wires from the masts led into the building.
4. In a section between the "T"-shaped building and the new airfield there were five box-trailers each with a basket-shaped aerial array mounted on the roof.
5. The following Soviet officers were employed in building No. 64:
Lt. Col. Kyruchin
Major Petrotovaka
Major Andreva 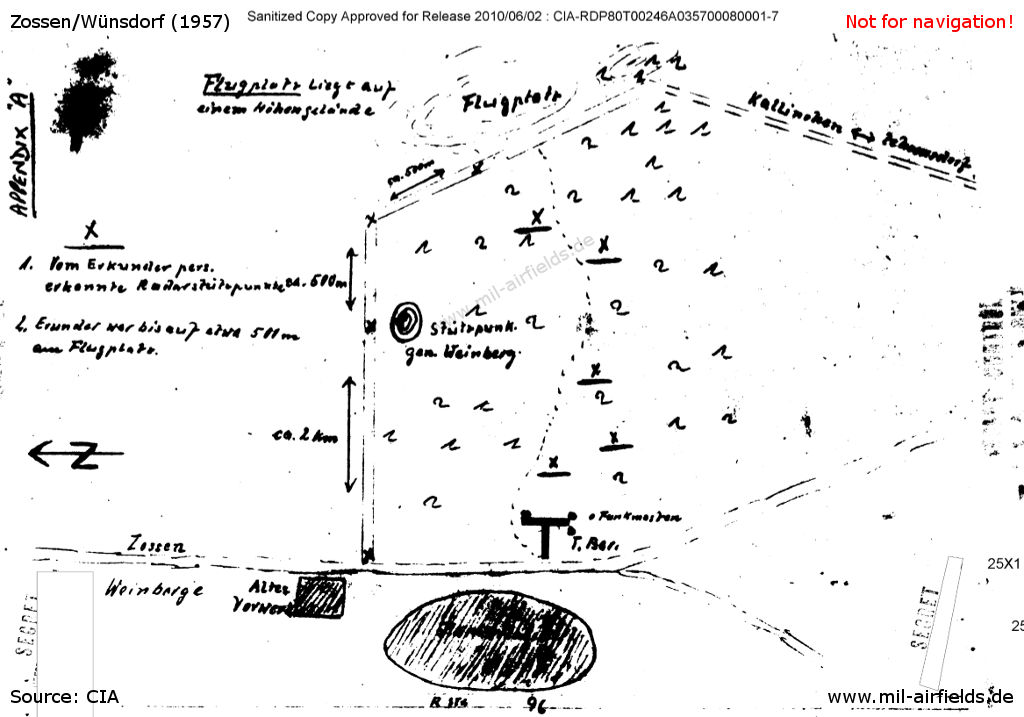 1. Attached at Appendix "A" is a sketch showing the location of a landing ground at present in use near ZOSSEN. The runway is approx 1 km in length and 50-60 m in breadth and is constructed from PSP (Pierced Steel Planking).
2. There are no hangars on the landing ground but one large barrack block measuring 10 x 50 m has been constructed to house flying personnel and a construction unit.
3. At the point marked "X" on Appendix "A", there is an aerial array constructed on a wooden platform. Sketches of this array are given at Appendix "B". From the location of this aerial array, overland cables run to the T-shaped building in the STAMMLAGER, ZOSSEN. 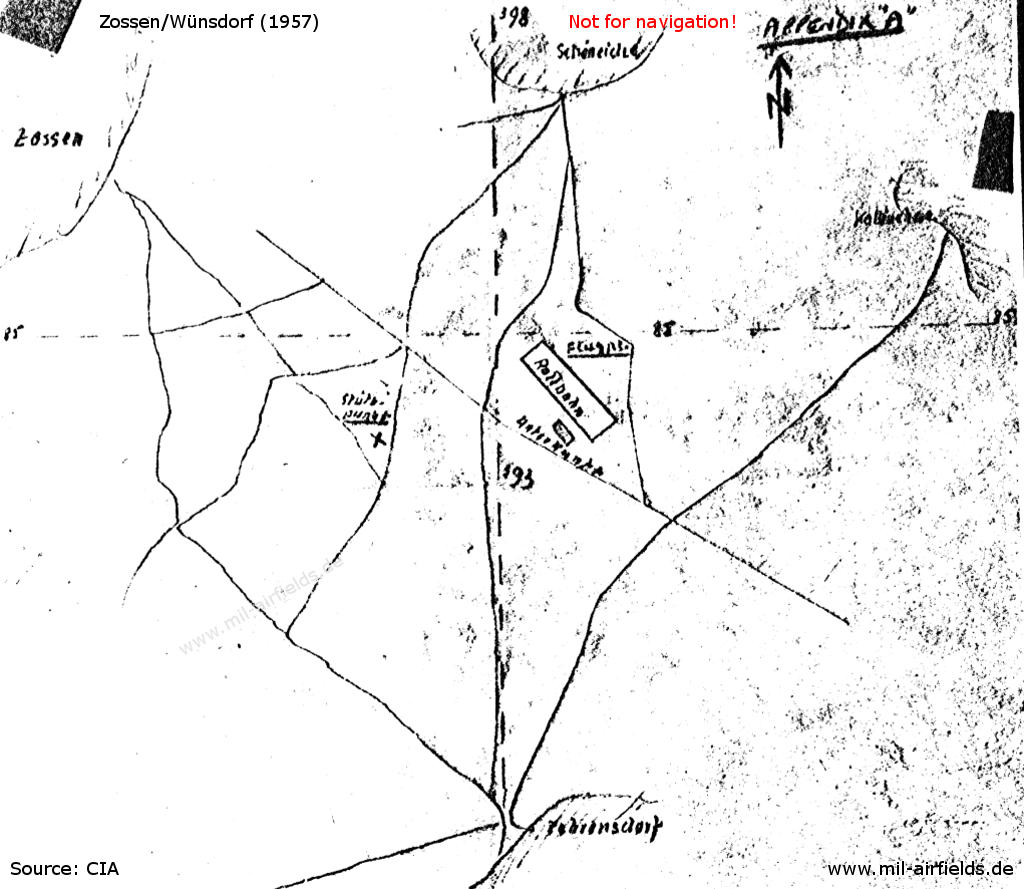 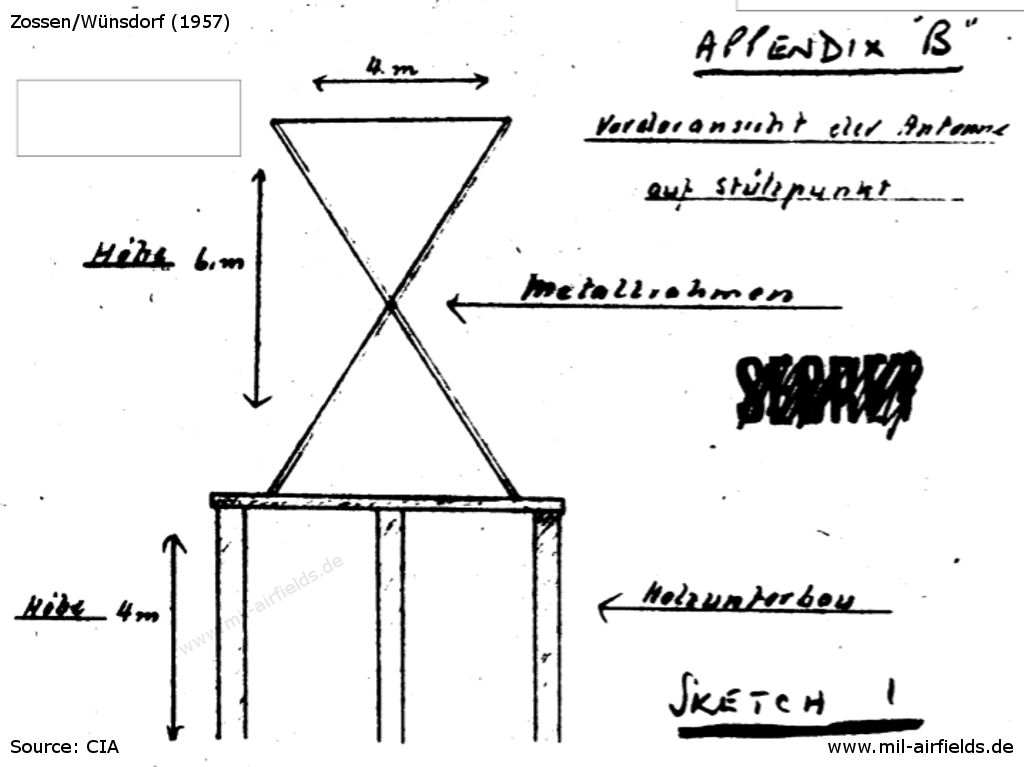 Appendix "B", Sketch 1 - Antenna on base 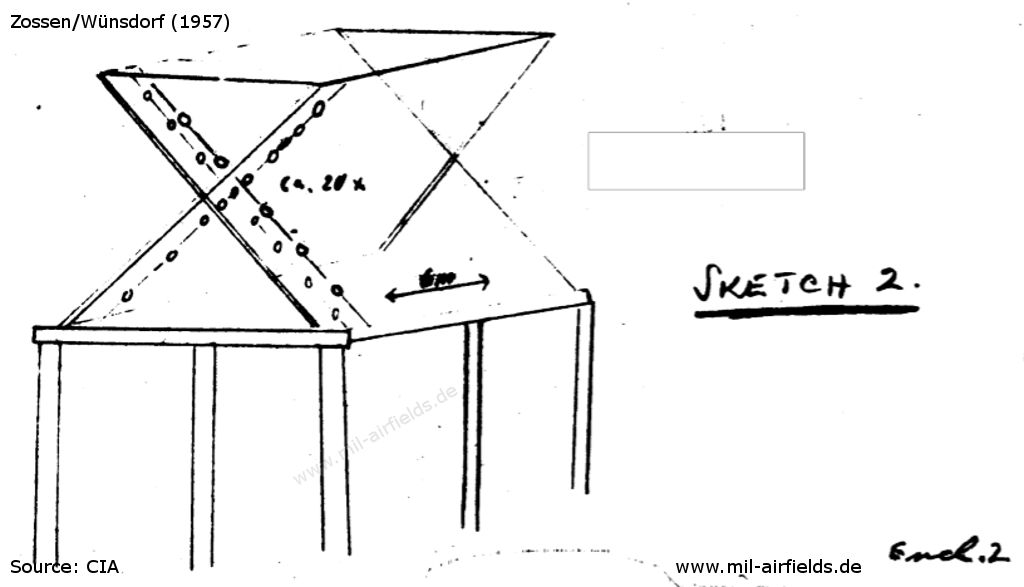 (a) At present there is a concrete runway approx 300 m in length. The remainder of the runway is plain earth which has been levelled and rolled. Levelling work is still being carried out on the WESTern edge of the runway.
(b) At the beginning of August 1957, a total of 13 aircraft with twin piston engines were seen on the landing ground. Other equipment seen was as follows:
- 1 vehicle used as flying control;
- 1 ... set up as an office;
- 1 ... ZIS 151;
- 5 W/T trucks with whip aerials.
(c) A barrack block is being constructed on the NORTHern edge of the landing ground.
Source: /CIA RDP80T00246A037500200001-3/ 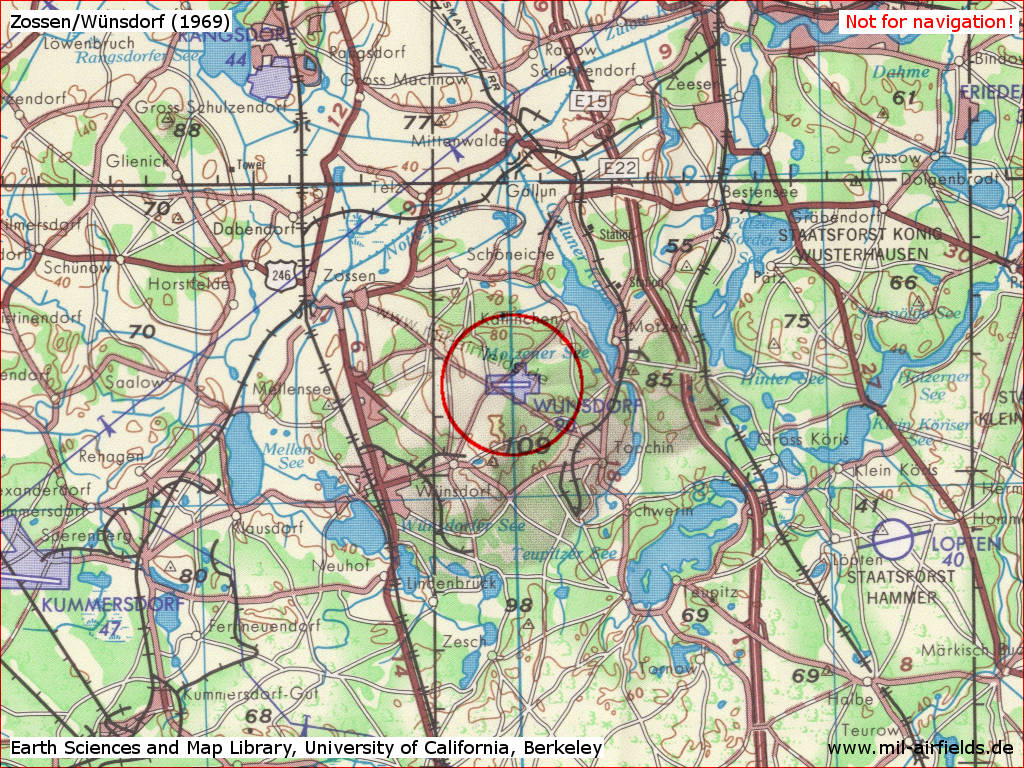 Zossen/Wünsdorf Airfield on a US map from 1969
Source: Earth Sciences and Map Library, University of California, Berkeley) 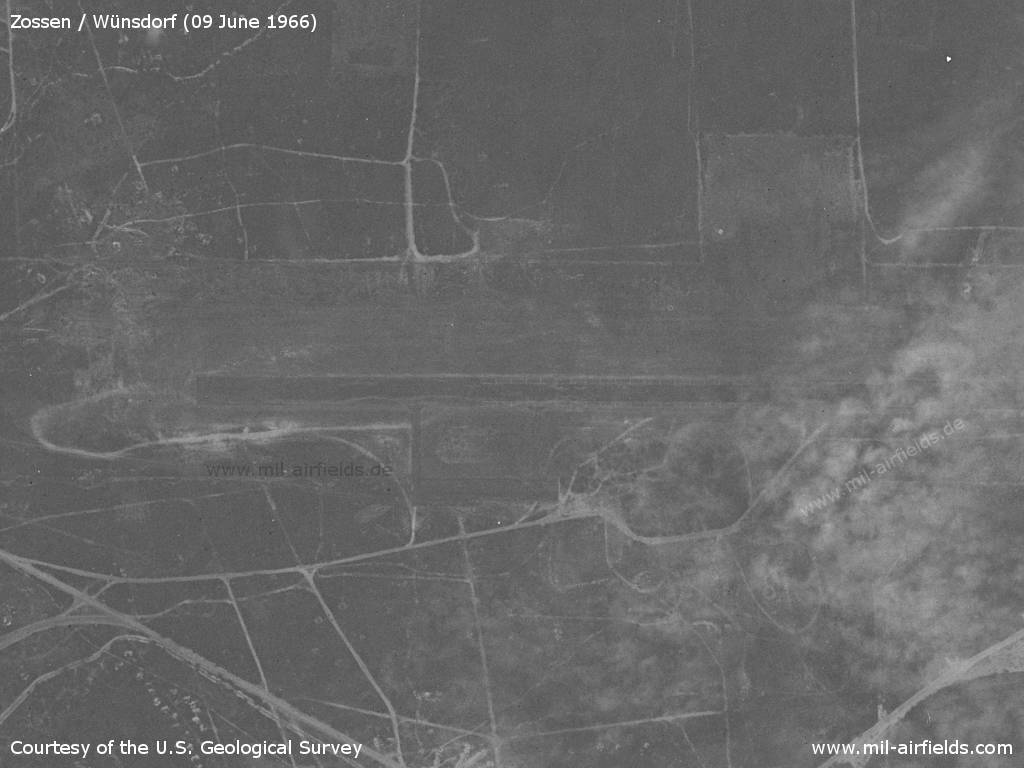 The landing ground on a US satellite image from 09 June 1966
Source: U.S. Geological Survey 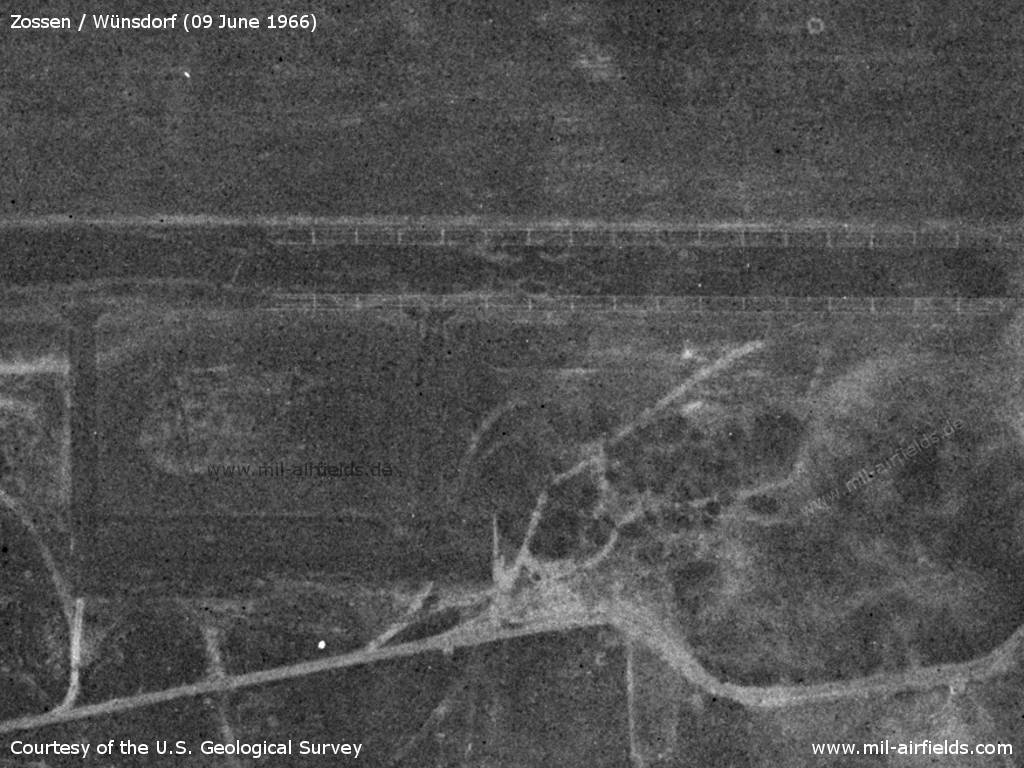 The following aerial photo was taken by Frank B., whom I thank very much! 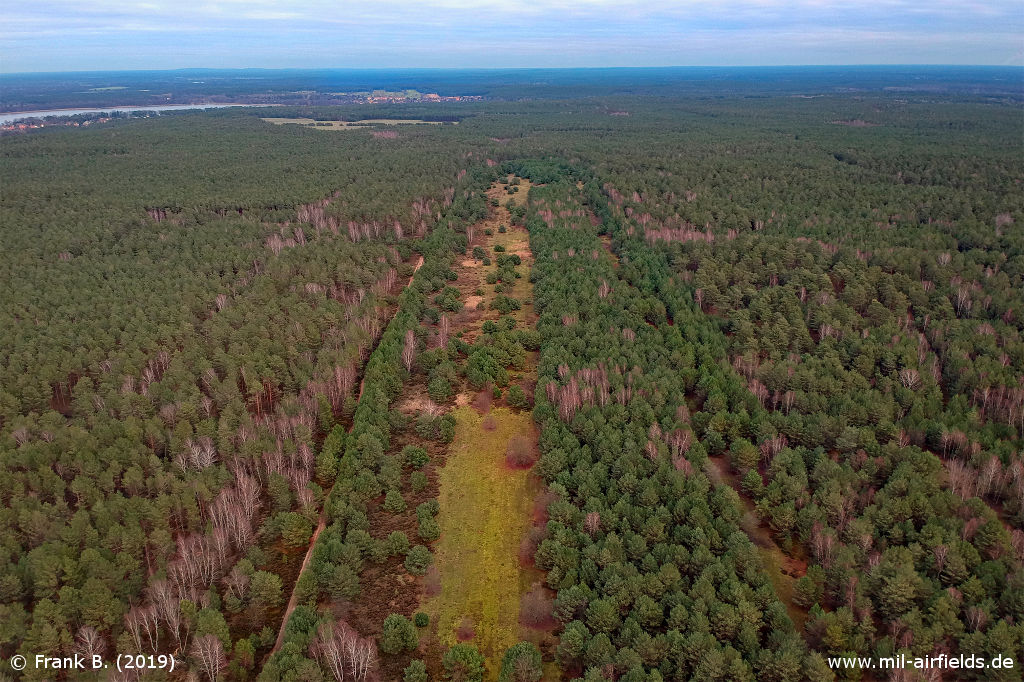 Aerial picture from 2019 - The viewing direction is east. The old structures with runway, edge of the airfield and parking area (right) are still recognizable by missing or different vegetation.
Source: Frank B. 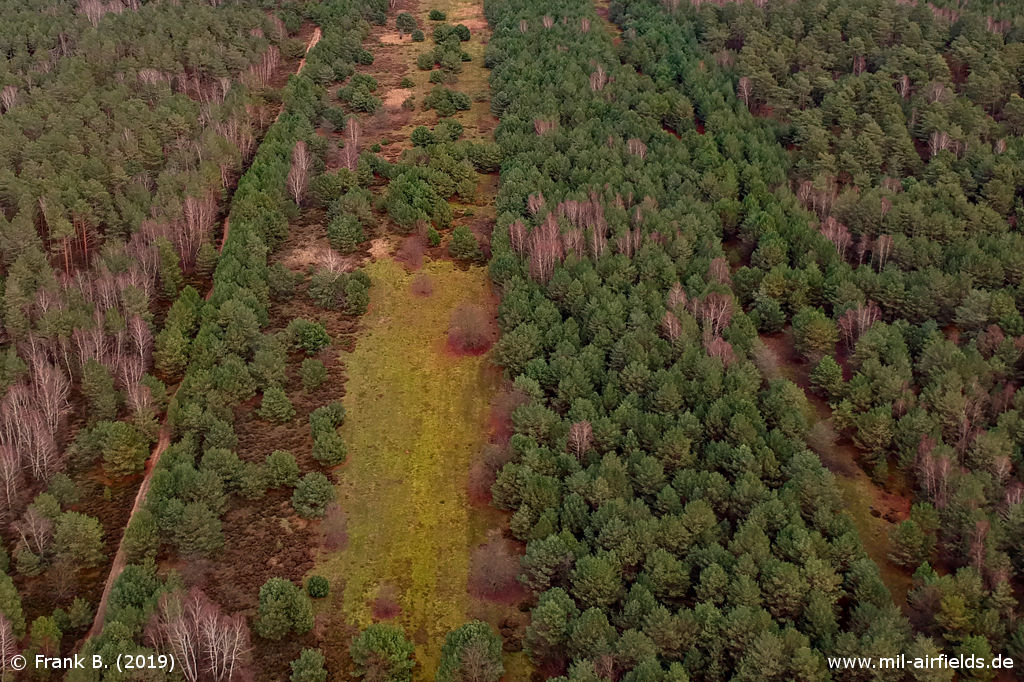 Rangsdorf Airfield, Germany
only 11 km away 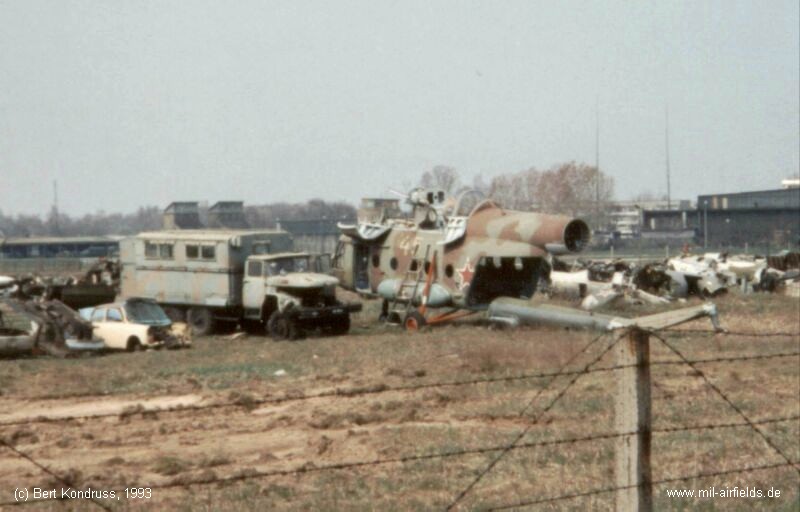 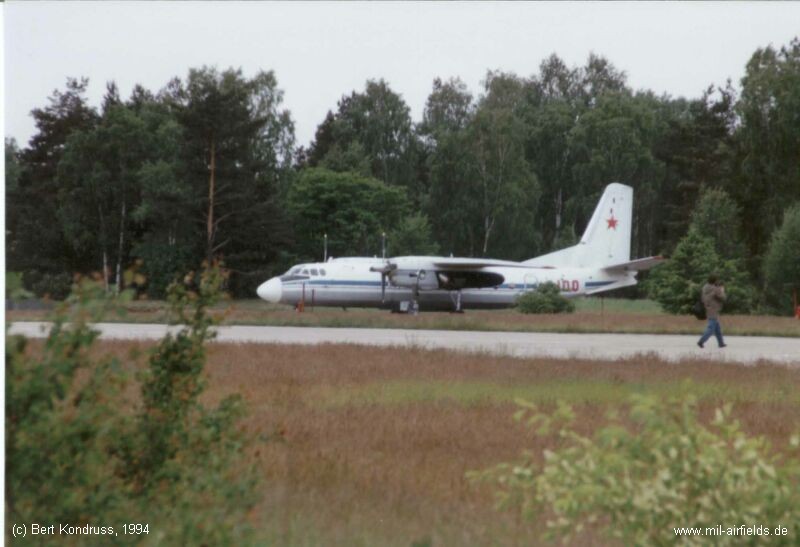 Berlin-Schönefeld Airport, Germany
only 20 km away 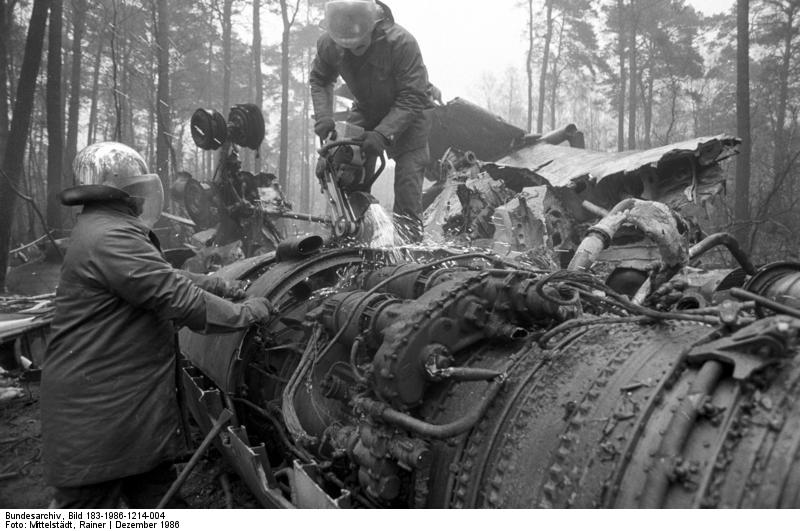 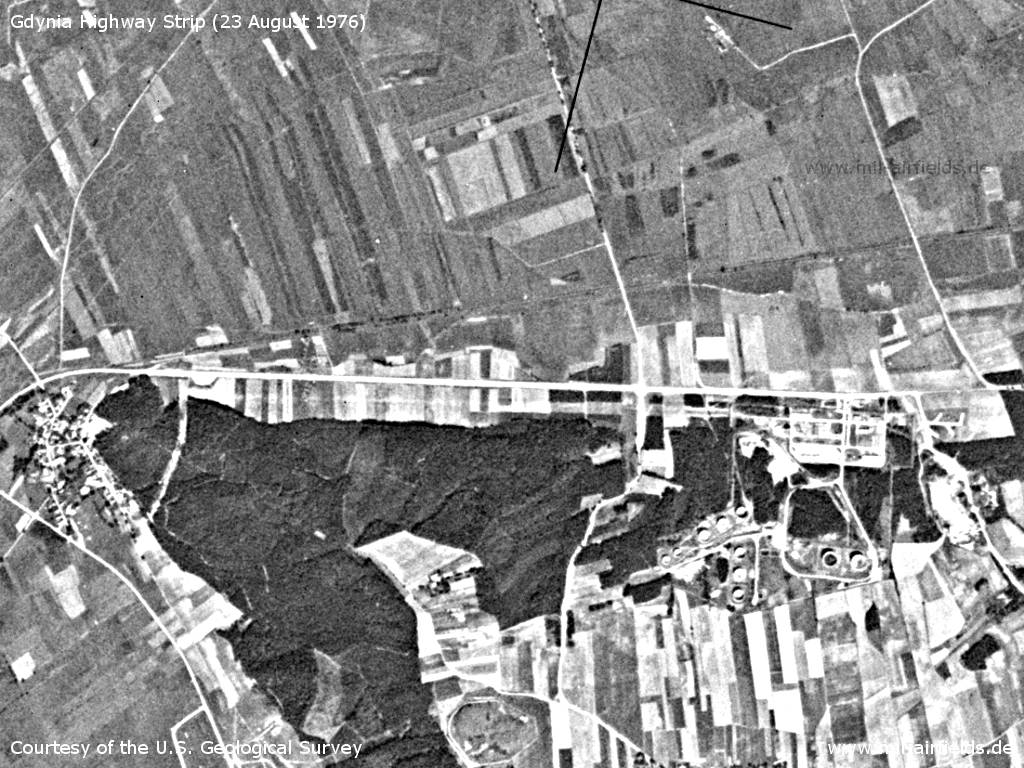