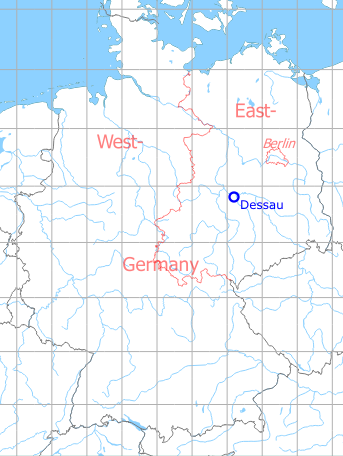 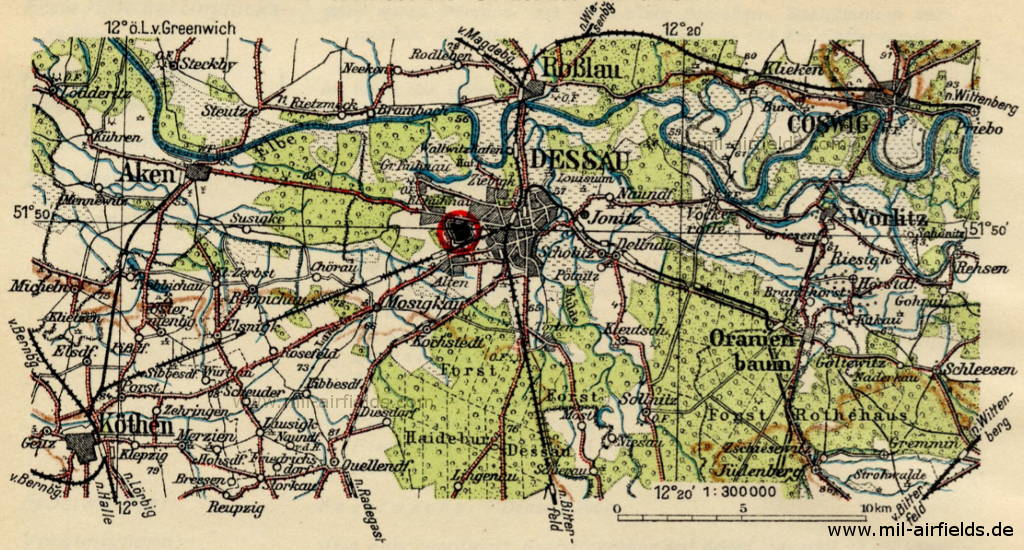 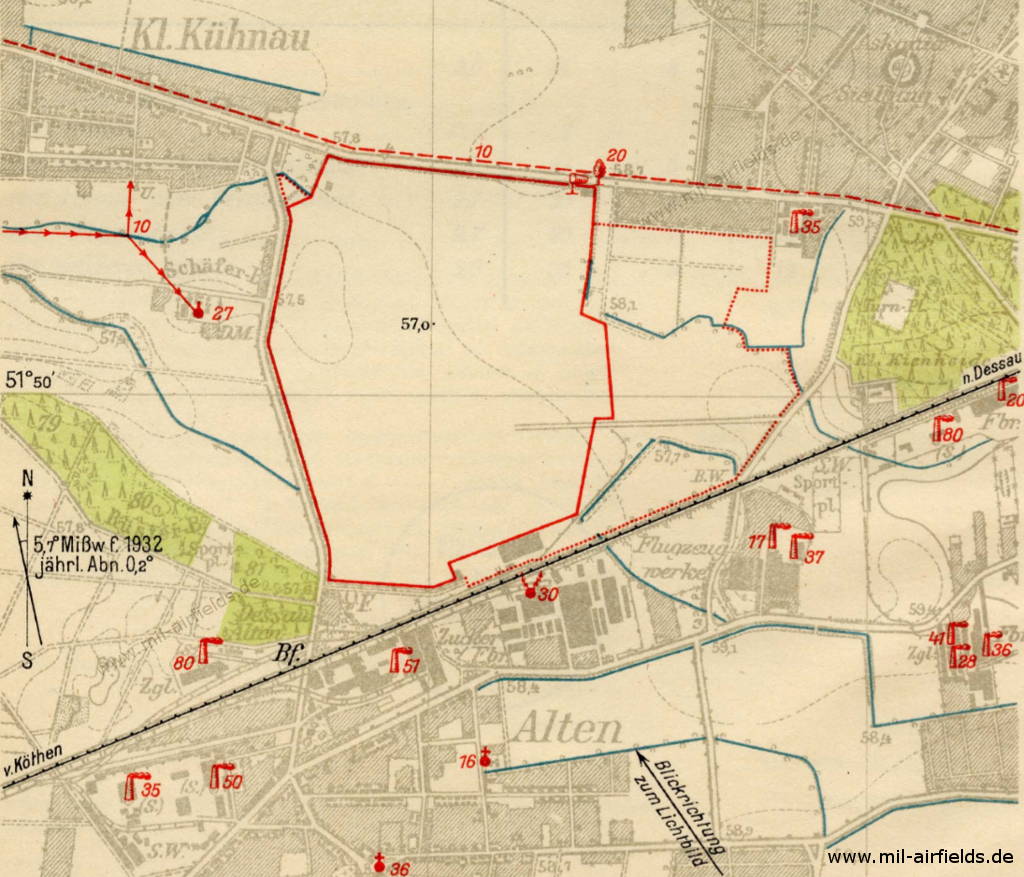 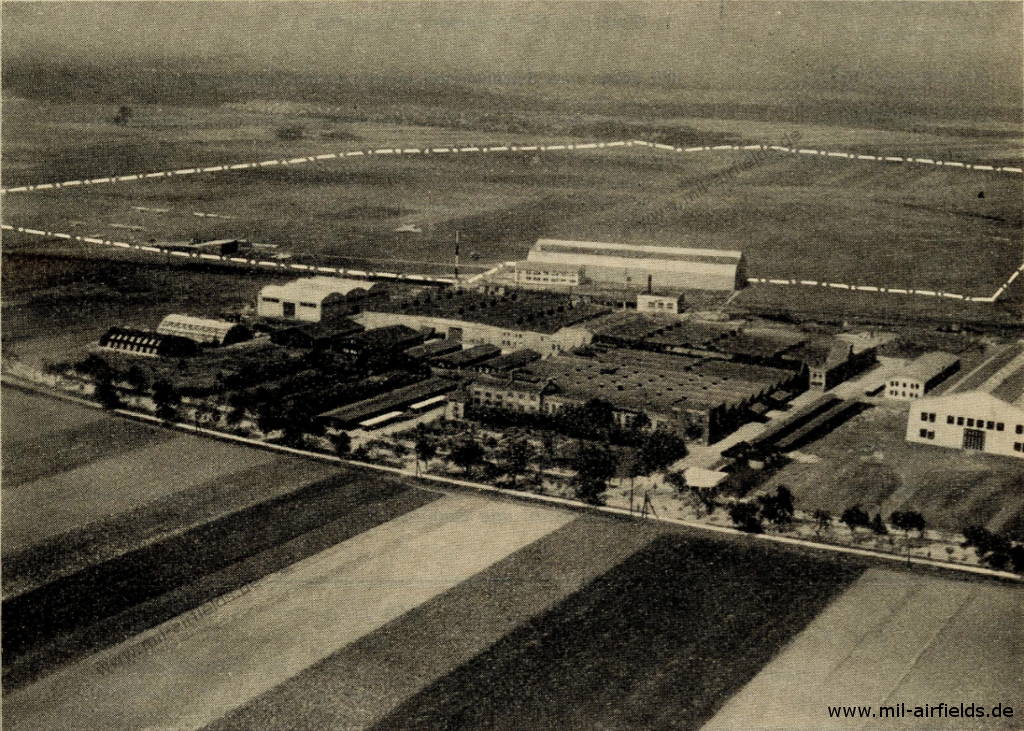 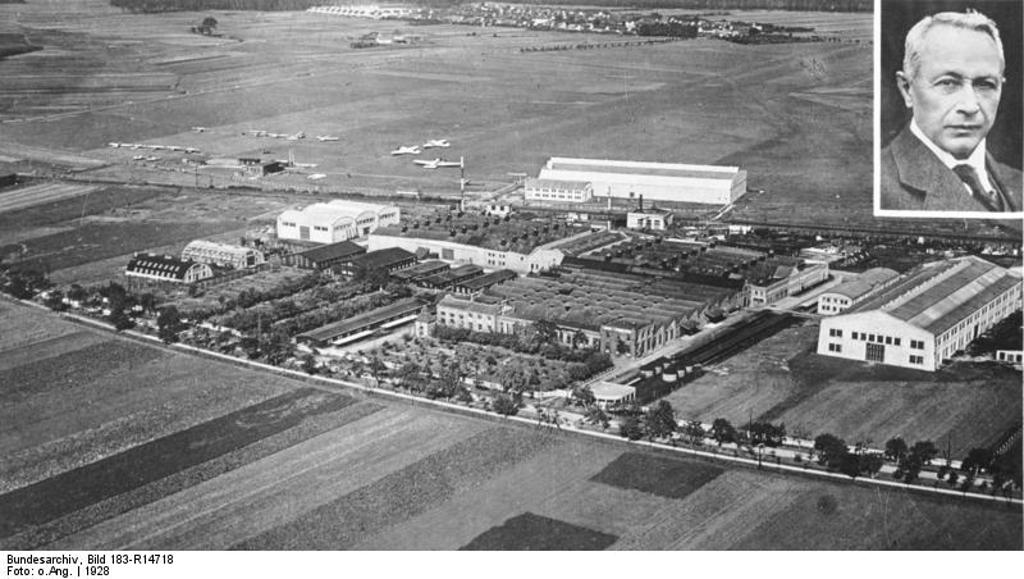 The airfield is located about 3 km west of the Reichsbahnhof (main station) Dessau between the road to Aken and the Reichsbahn railway line to Köthen. In the south factories. Windsock at the start house. On request at the police auxiliary air station landing signs. Movement area border marked in the north and west by roads, in the south by railway line, in the east by field railway track.

No permanent night flying lighting. On request at the administrator:
Pilot light:
Flashing light on 2 red-white radio masts,
Identifier: Flashing - - - - - - - - in intervals of 5 to 5 seconds.
Height of fire above ground level: 30 m.
Type of light source: Electric incandescent light (Osram Nitra).
The radio mast tips are marked by 2 red Pintsch edge lights (Osram nitral light of 300 watts each).
In addition, 4 fires each w. vertically on top of each other.
Luminous intensity per radio mast: 17 300 HK
Identifier: as above.
Lighting times: On request according to agreement. The fires are guarded.
(HK = Hefnerkerze = Hefner candle, unit of light intensity)

Radio station available in the plant of the company.

Available in the plant of the company.

Request from the administrator.

First aid in the case of accidents

To be provided by the administrator's personnel. Medical room available, next doctor in Dessau-Siedlung (1.8 km distance).

In the air traffic control building and in Dessau.

No shuttle service. Taxi cabs on call at any time. Tram and bus station at the airport.
(Source: Flughandbuch für das Deutsche Reich 1932) 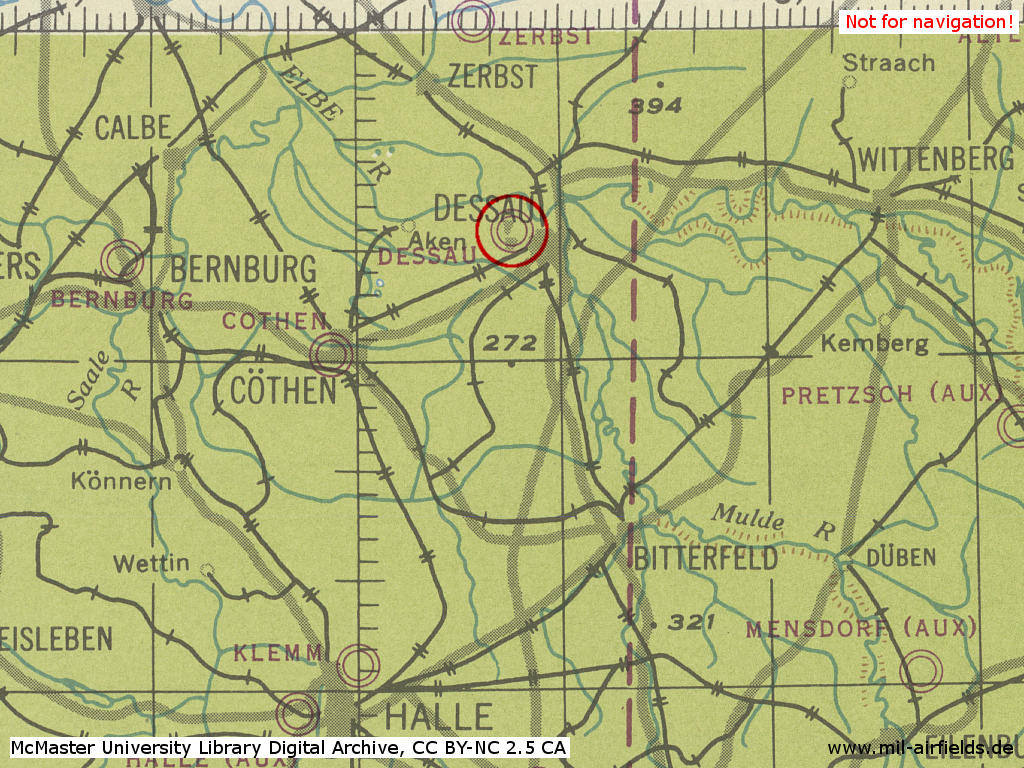 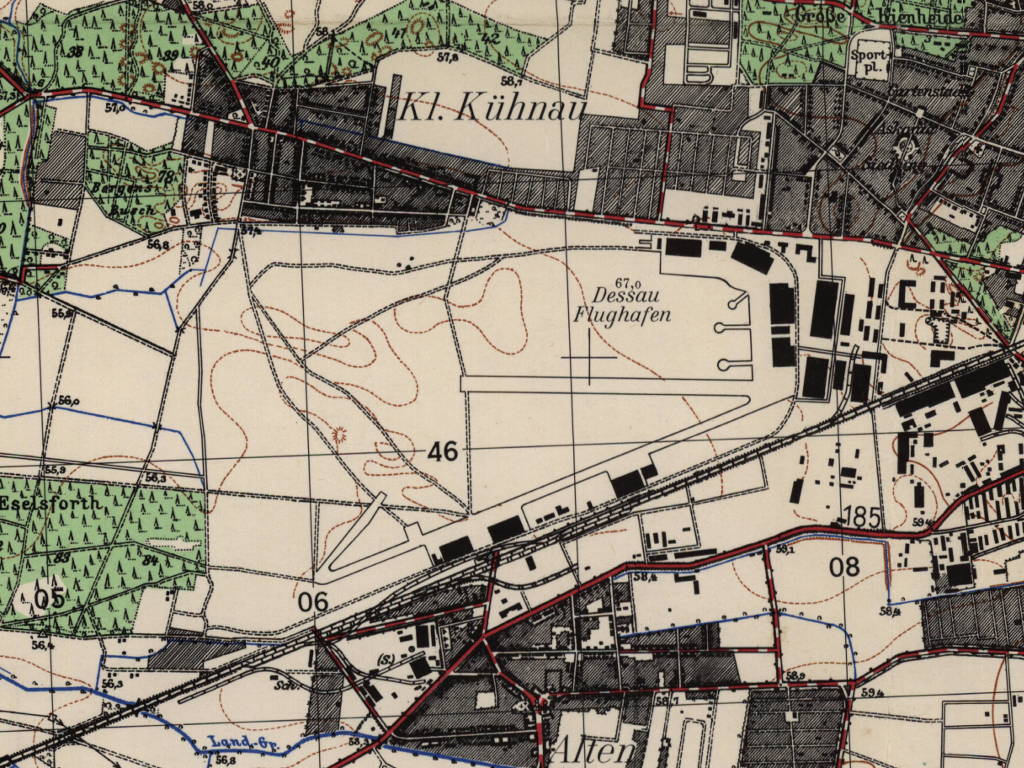 In the years 1945 to 1946, aircraft of the types EF-126, EF-127, EF-131 and EF-132 were still being designed in Dessau under Soviet leadership. In mid-1946, around 4,000 people worked in the aircraft factories.
From summer 1946, a large number of engineers were deported to the Soviet Union to continue development projects there. From autumn onwards, the aircraft factories in Dessau are dismantled, and this work continues until 1947.

In autumn 1947 the airfield was occupied for three weeks by Soviet fighters from Köthen and Zerbst, which took part in manoeuvres from here. In June 1948 Dessau was again occupied by about 25 aircraft from Zerbst.
In 1949 the runway was extended and the work was completed in summer. In September 1949 already 60 to 80 airplanes are stationed on the airfield, presumably two regiments with Lavochkin La-9. About February 1950 the first Soviet jets come to Dessau with airplanes of the types MiG-15 and Yakovlev Yak-17. In the following months the propeller-driven La-9s are taken out of service and a regiment with about 30 MiG-15s and a few training aircraft remains on the airfield. The MiG-15s have red three-digit numbers starting with a 3. Four airplanes are in constant readiness.
At the beginning of October 1951 the MiG-15 were withdrawn from Dessau. A few days later, on October 5, 1951, the Soviet ground attack regiment with about 50 aircraft Ilyushin Il-10 previously stationed at the Berlin-Staaken Airfield moves to Dessau. On 26 December 1952 the regiment was transferred to Brandis Airfield.

Aircraft of the Soviet Forces at Dessau airfield
Lavochkin La-9

The airfield is taken over by the East Germany and already in December 1952 the reconstruction of the Junkers factories for a GDR aviation industry begins. In cooperation with other companies, MiG-15 aircraft are to be produced here. The drawings were prepared by the "Materialamt" Pirna-Sonnenstein. A MiG-15 was also assembled in Pirna, which was to be transferred to Dessau in August 1953 for use in the flight testing department for training. Also the Reichsbahnausbesserungswerk (Raw) railway repair shop Dessau is planned to be integrated into the production process and rebuilt accordingly, to deliver the first MiG-15 in December 1953. After the popular uprising on 17 June 1953, however, all activities are stopped. The Pirna Materialamt is dissolved and the Raw Dessau hall is sold back to the Deutsche Reichsbahn for 3.5 million East Marks.
In late summer 1953, the Kasernierte Volkspolizei (KVP), the covered forerunner of the National People's Army, moved into the airfield buildings. However, there are no aircraft stationed on the airfield, only occasionally it is used by Soviet air units during manoeuvres. In March/April 1955, prefabricated parts for two halls were transported to Pirna-Sonnenstein. The halls were originally to be built in Dessau, for which the foundations were cast in March/April 1953. However, after the construction of the GDR aviation industry was stopped in June 1953, the parts lay unused on the airfield.
From 1957 transport aircraft of the GDR's National People's Army (NVA) are stationed in Dessau, which carry out training operations, as "Transport Flying School". Airplanes of the types Aero L-60, Antonov An-2 and Ilyushin Il-14 as well as helicopters Mil Mi-4 and Mi-1/SM-1 are used. On 4 November 1963 the Il-14 move to Dresden-Klotzsche Airfield and Dessau is primarily used only by gliders of the East German pre-military organization "Gesellschaft für Sport und Technik". In 1979 gliding is stopped and the airfield closed. NVA documents indicate, however, that also in the 1980s the area is assigned to the Fliegertechnische Bataillon 34 (FTB-34) from Brandenburg Briest and thus at least the intention of a renewed aeronautical use could not be completely excluded. At this time the airfield is probably also the helipad HSLP 1025 for the Radio Reconnaissance Regiment 2 (FuAR-2), which have its barracks at the airfield. 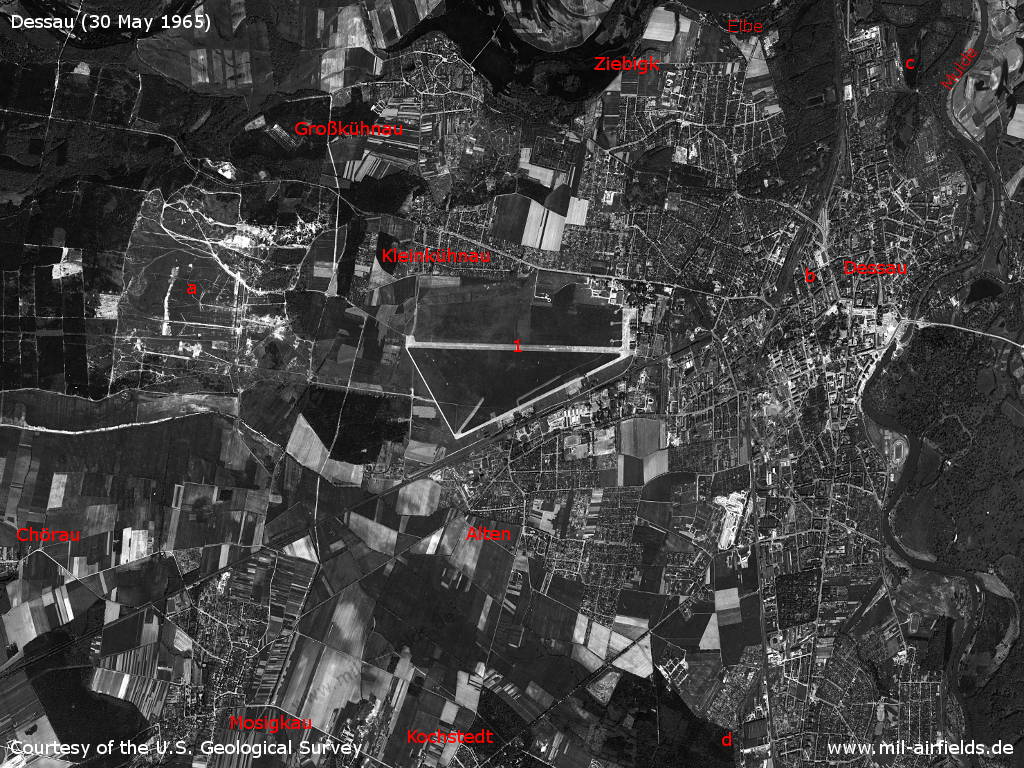 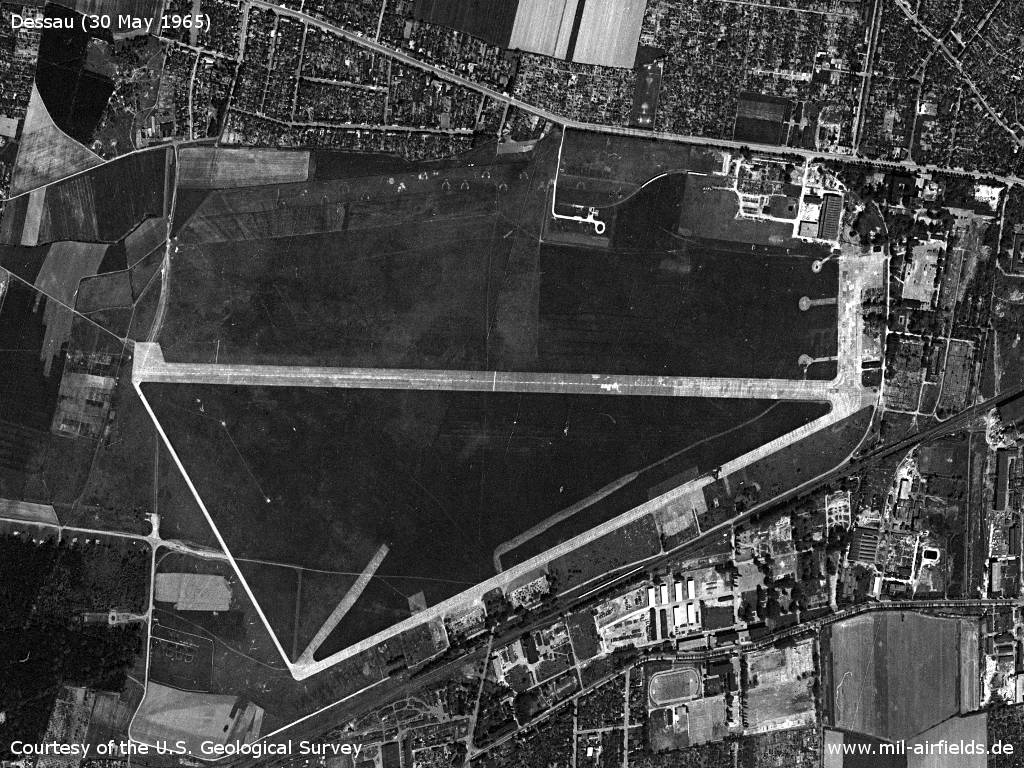 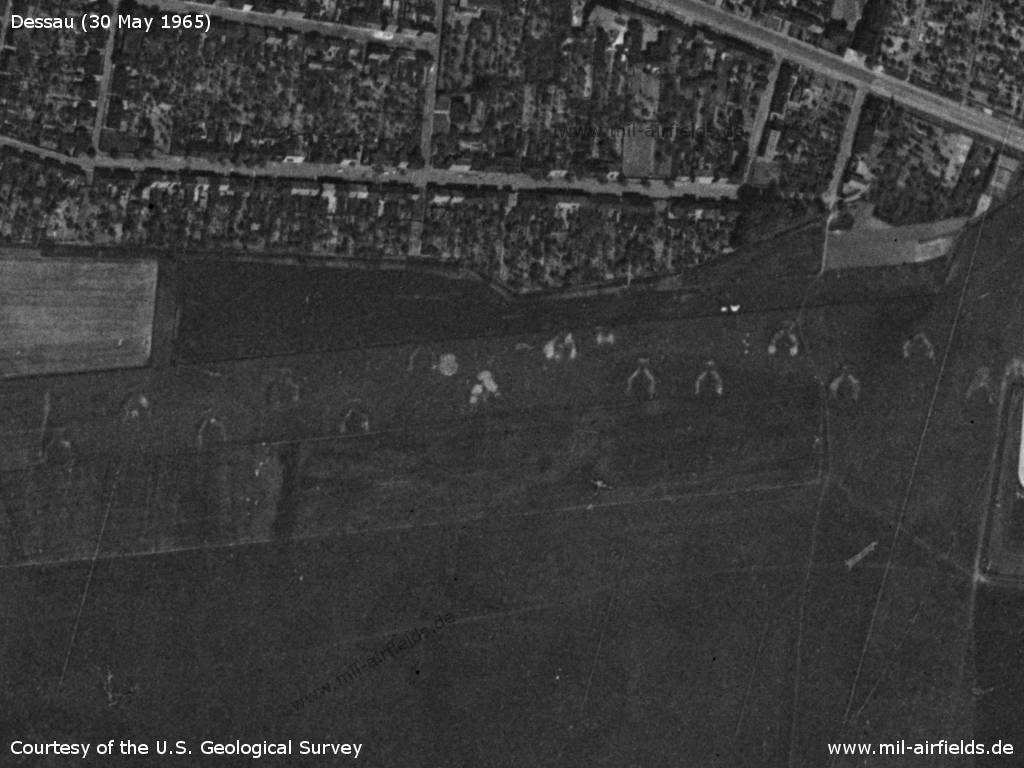 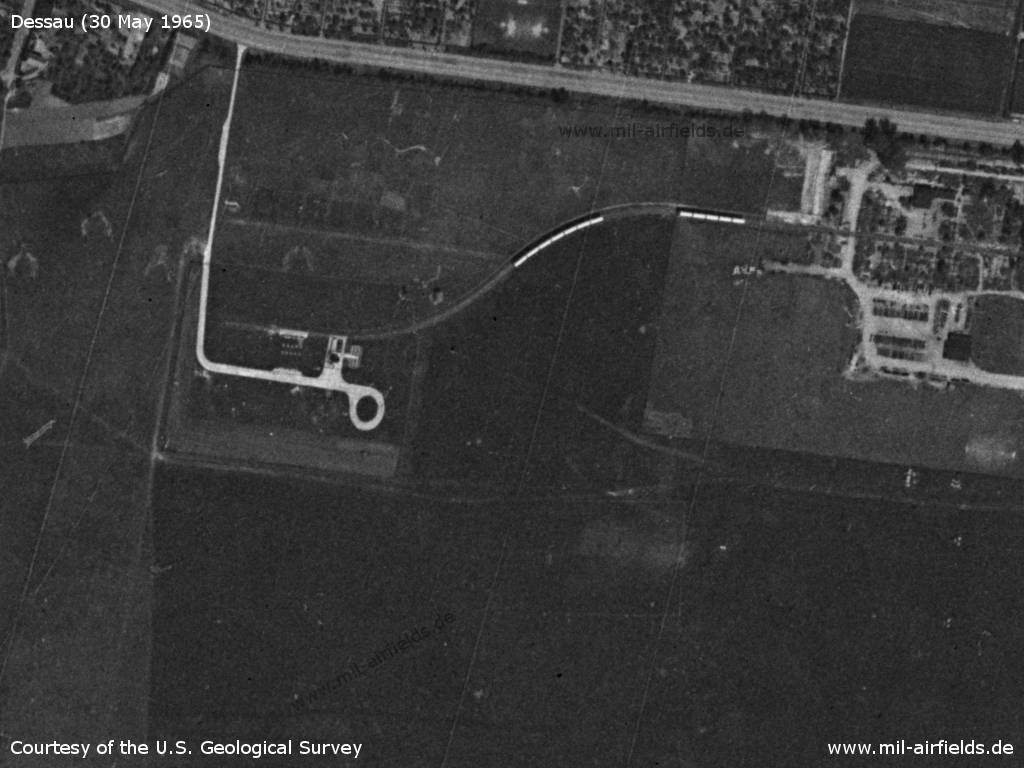 The installation on the left is probably the fuel dump. - On the siding there are two units of railway wagons.
Source: U.S. Geological Survey 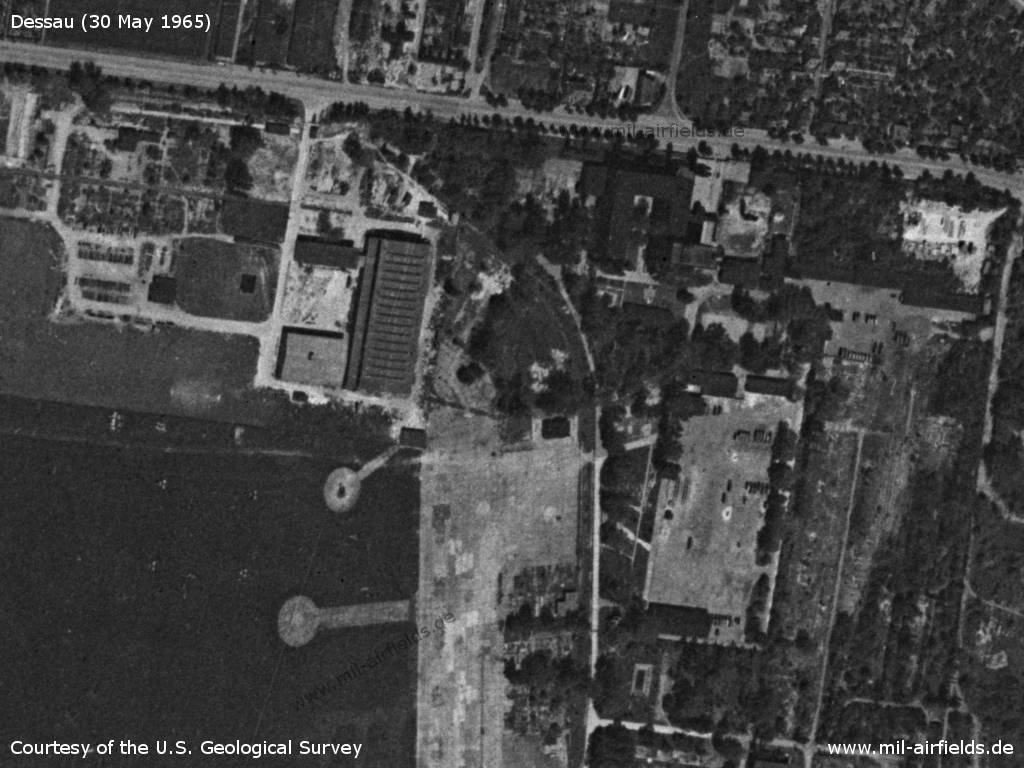 Northeastern corner of the airfield - Here stands a large hall, in which houses the technology museum today. The four groups, each with three bright points at the bottom left, could be antenna foundations of the radio reconnaissance regiment.
Source: U.S. Geological Survey 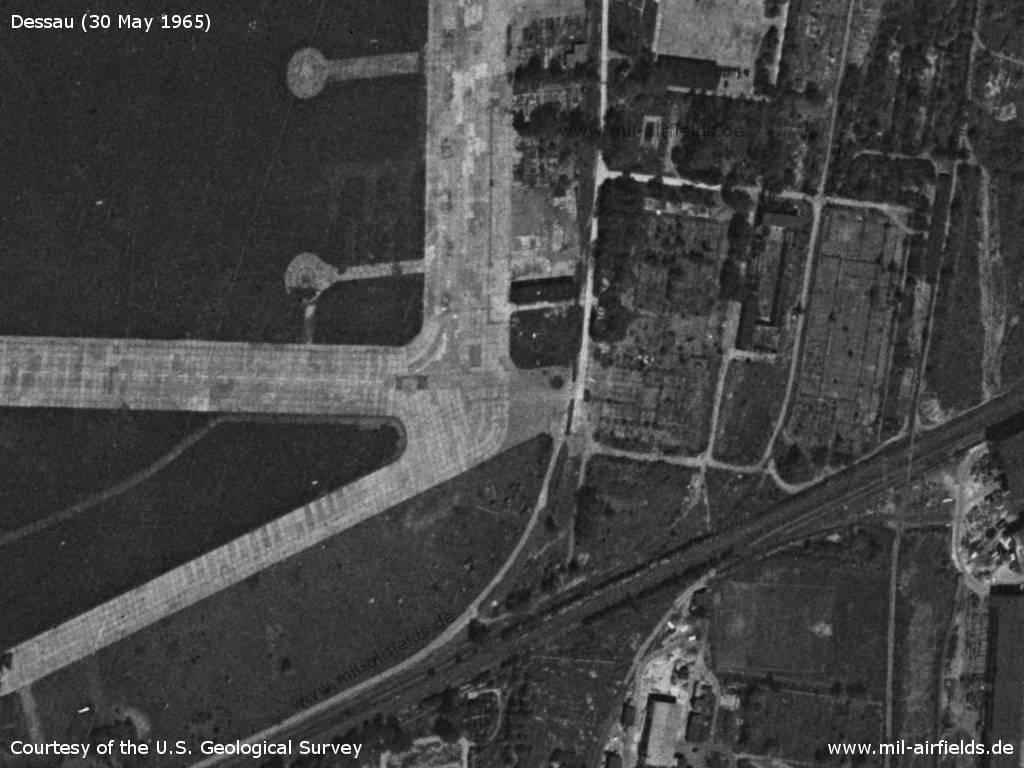 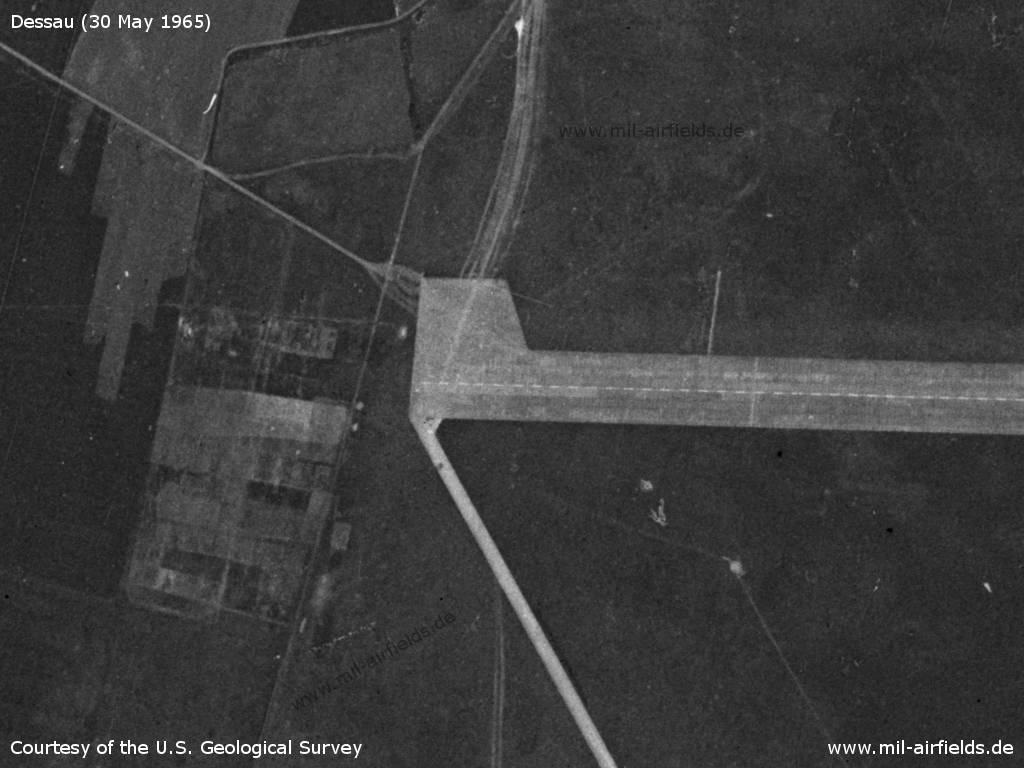 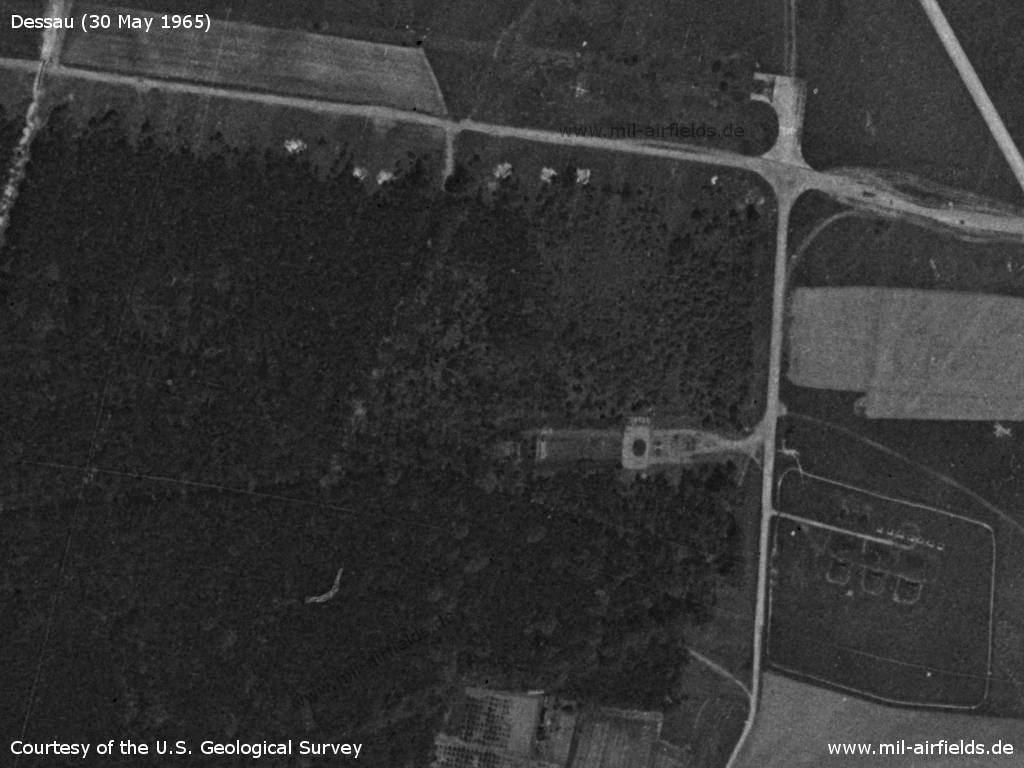 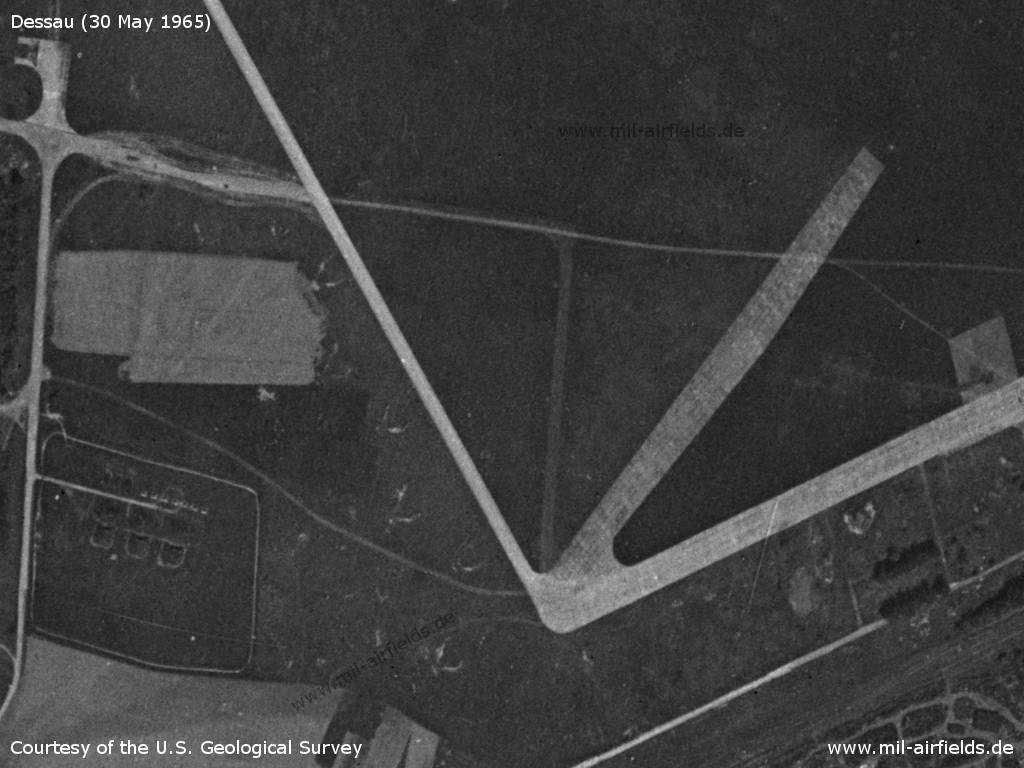 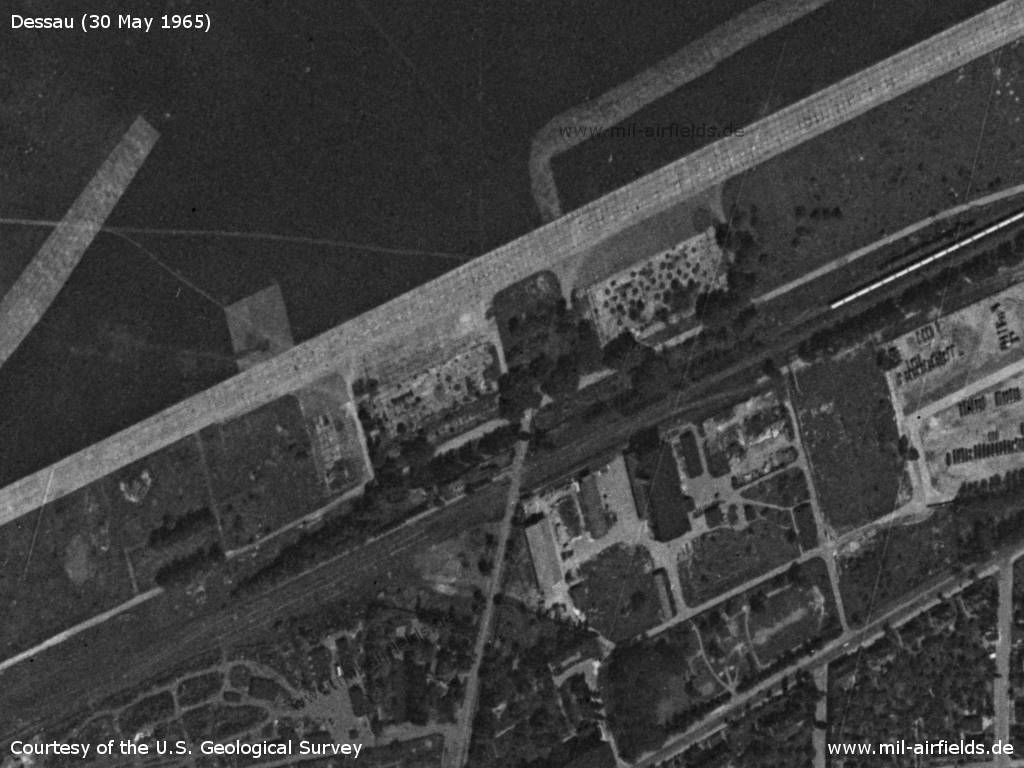 Demolished hangars in the south, Dessau-Alten train station - Until 1945, parts of the Junkers plants were also south of the railway line
Source: U.S. Geological Survey 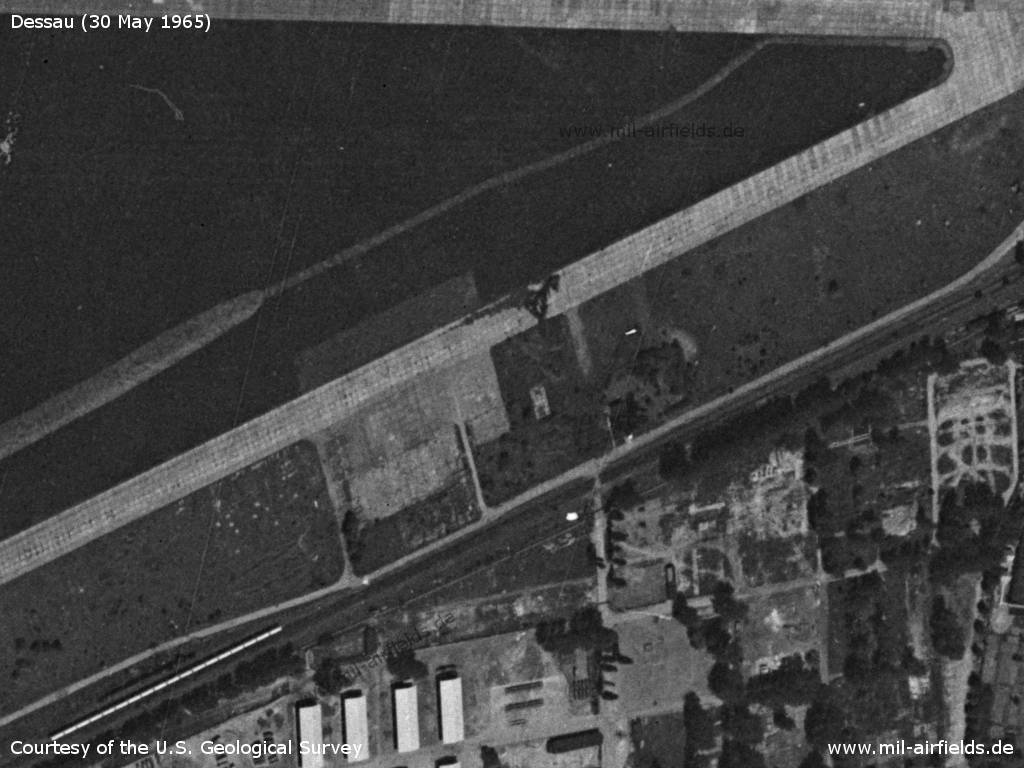 The airfield was primarily only used by gliders of the pre-military organization "Gesellschaft für Sport und Technik". 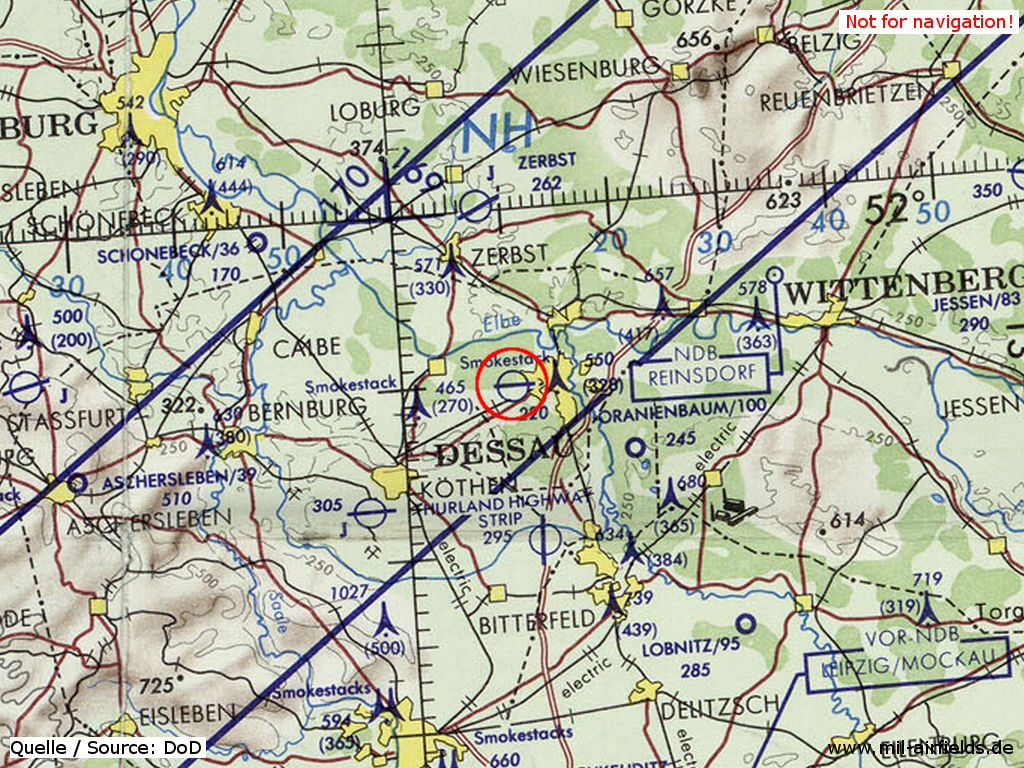 Dessau Alten Airfield on a map of the US Department of Defense from 1972 - The blue lines mark the southern corridor (GDR terminology: temporary air link), in which allied aircraft can fly between West Germany and Berlin. Thus, the Dessau airfield could be flown over by western airplanes at will and thus well reconnoitred.
Source: ONC E-2 (1972), Perry-Castañeda Library Map Collection, University of Texas at Austin 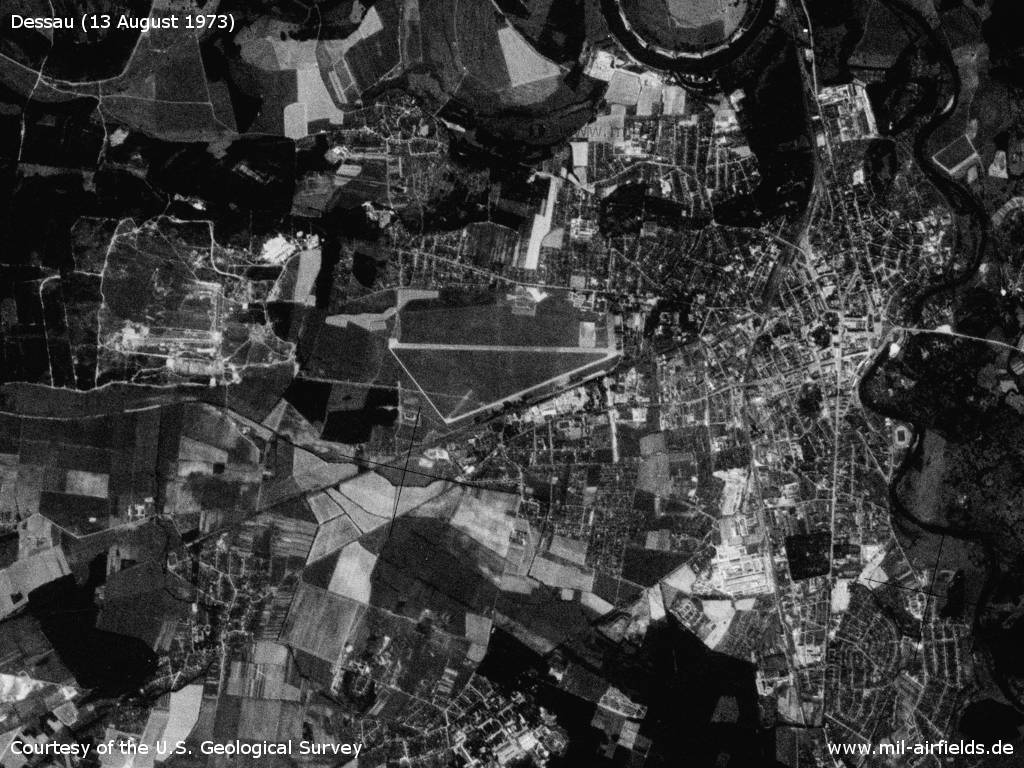 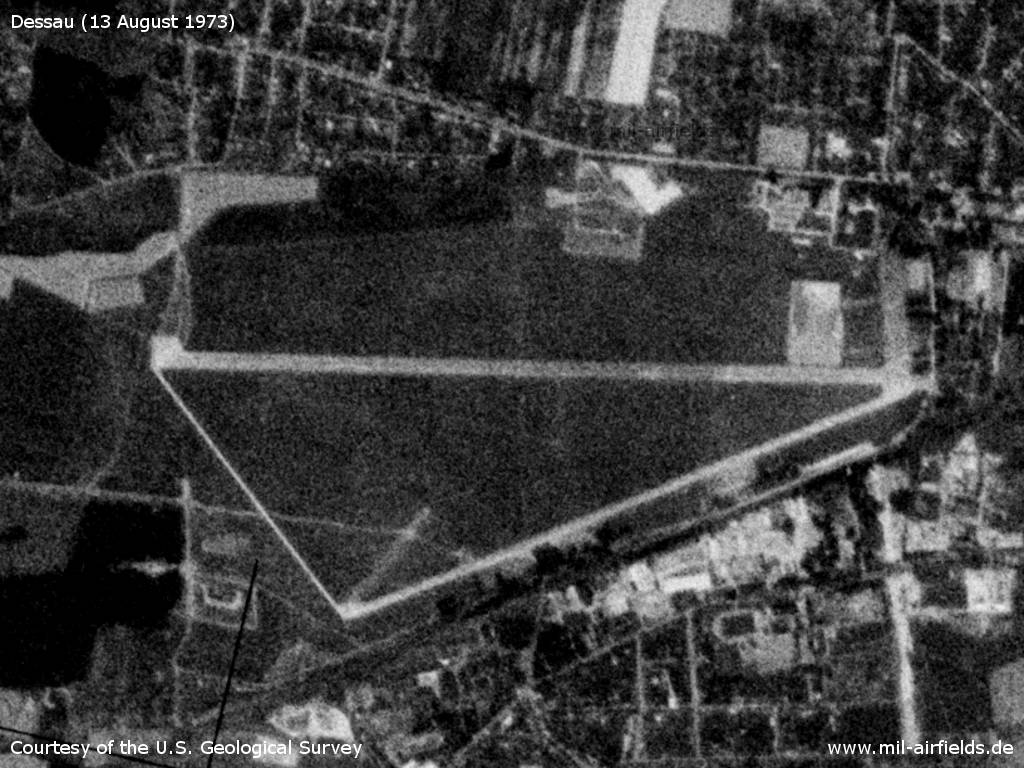 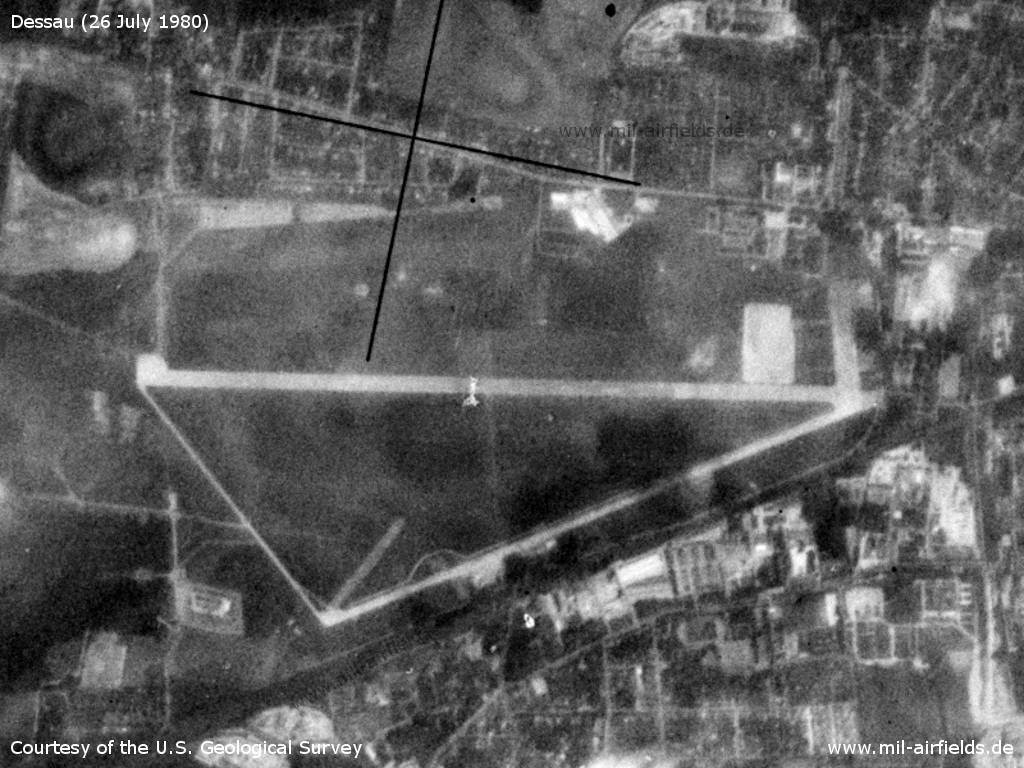 Dessau on Saturday 26 July 1980 - The airfield is closed for about a year and the area is used by the East German Radio Reconnaissance Regiment 2 (Funkaufklärungsregiment -2, FuAR-2).
Source: U.S. Geological Survey

Köthen Air Base (Germany)
only 20 km away 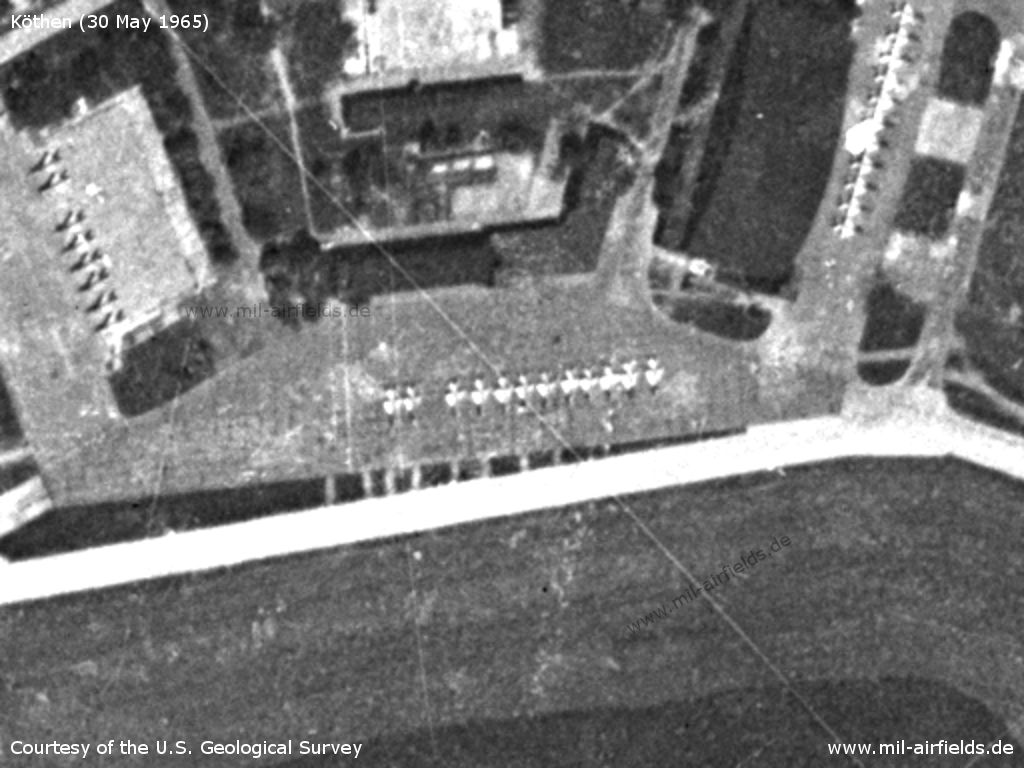 Zerbst Soviet Air Base, Germany
only 19 km away 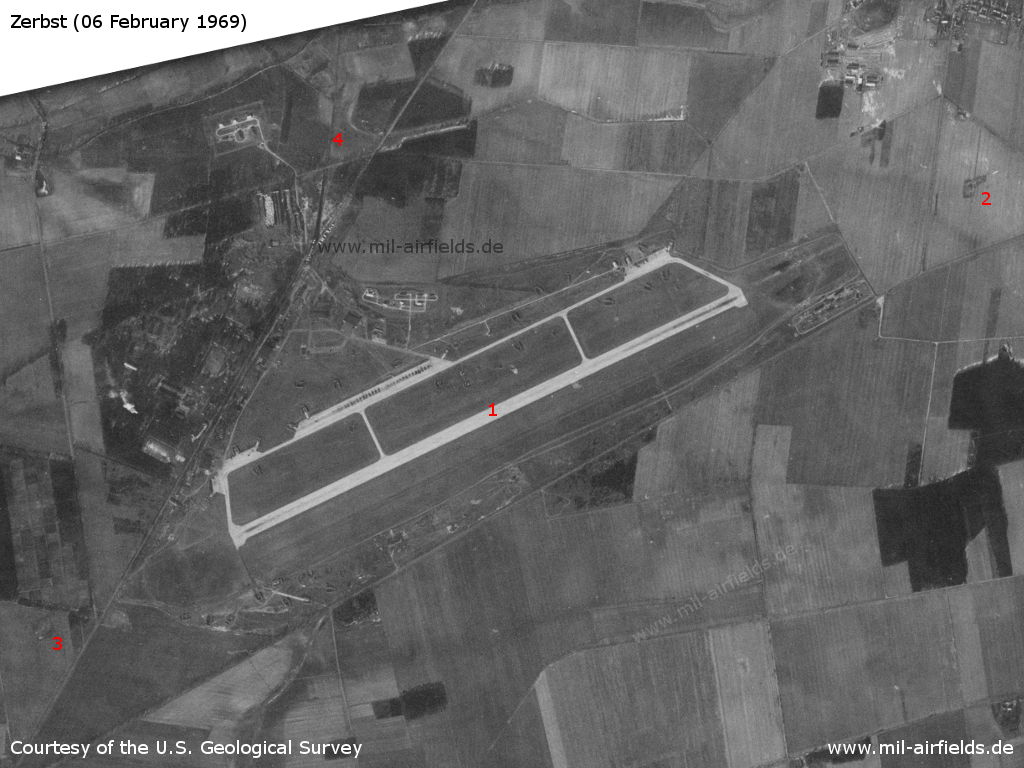 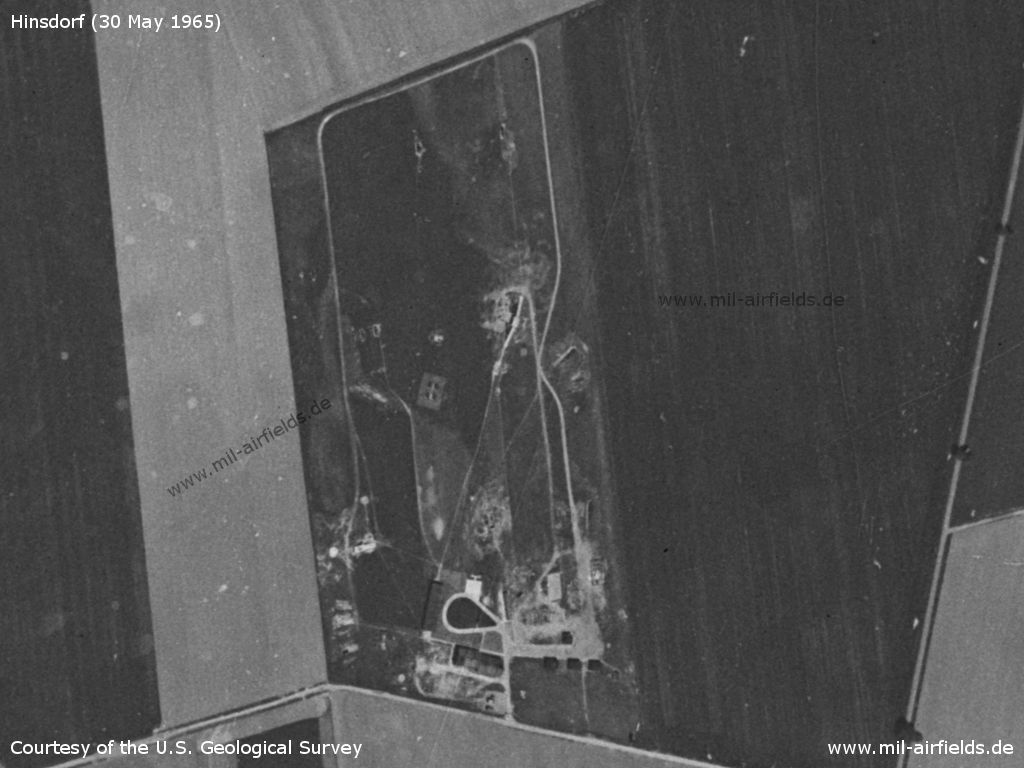 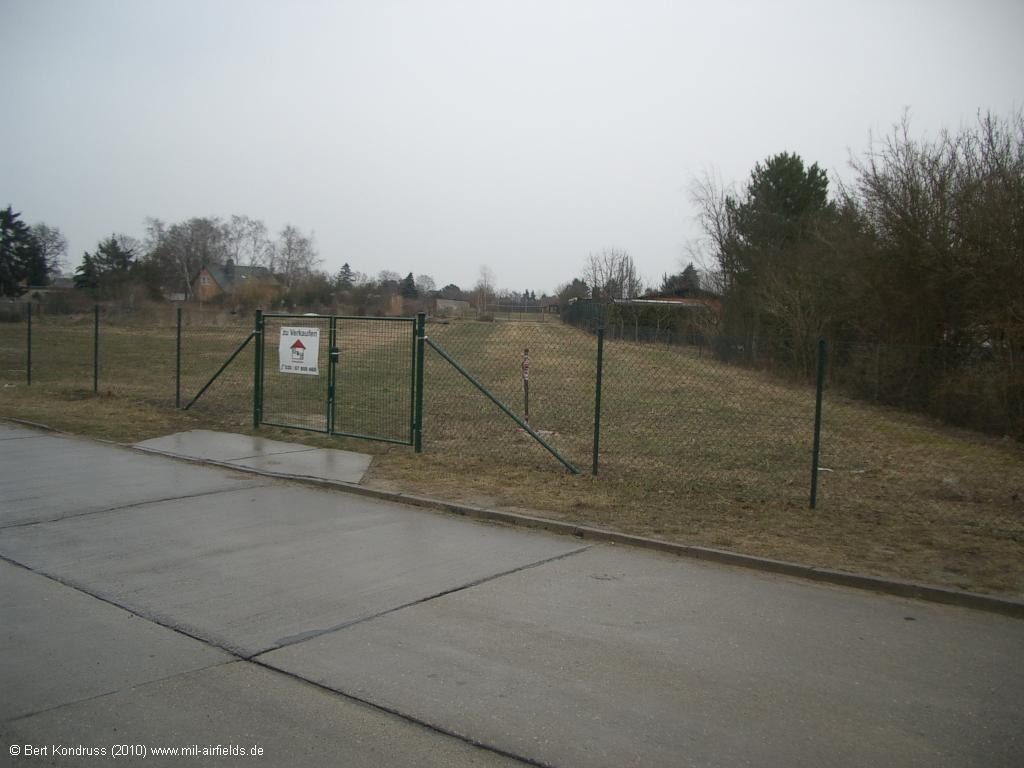